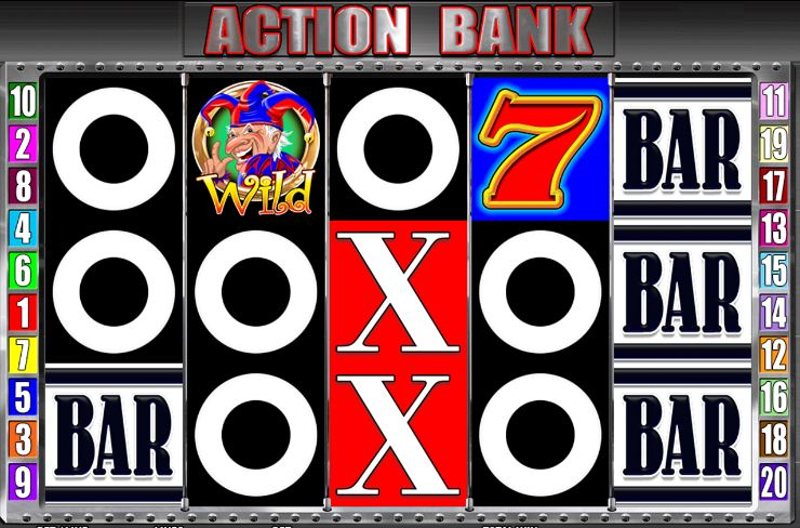 Action Bank is a fairly simplistic, yet very interesting online slot game by software manufacturer Barcrest. The basic design and setup will surely transport you back to the arcades if you are old enough to remember them, and if you’re a younger player, well then this can serve as a fairly accurate window into the past. The backdrop here is a steel-grey slab, possibly mimicking the body of a safe, and the symbols on the reels are reminiscent of Tic-Tac-Toe. Now, surely we have all played that one at some point in our lives. The symbols at hand are O, X, BAR and 7. Oh, and there’s also a Joker Wild, but more on that later.

So, as you can see, the symbols are few and they’re pretty simple in themselves. The highest paying of them would be the lucky 7, offering up to 500 times your line bet, and speaking of lines, there are 20 active paylines on this grid of 5 reels and 3 rows. They are fixed, though, so you won’t have the opportunity to regulate them. Stakes start off at an expected minimum of 20p per single spin, then they soar up to the maximum wager amount, which will set you back a total of £400 per spin.

Besides the features we’ve described below, let’s point out that Action Bank also comes with a random bonus feature. You can trigger it at any point during gameplay and it’s called the Big Bank Bonus. Once triggered, it will offer you a pick-me game, where you can reveal one of the three multipliers: Diamond, Ruby and Sapphire. The maximum of these will grant you a lucrative 500x multiplier. 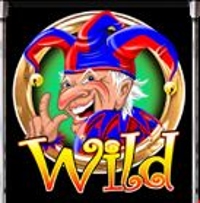 The Wild comes in the form of a Joker – another classic feature of this game – and it can appear in any position on the reels and substitute for any of the other symbols. In doing so, it will help complete any of the winning combinations and make for more prizes. However, the Wild cannot substitute for the game’s Scatter symbol, which is the only other special icon on these reels. Furthermore, the Wild symbol doesn’t offer any payouts of its own. 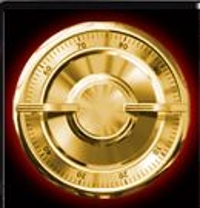 Yes, though seemingly very basic, Action Bank does have some free spins up its sleeve. And to activate them you will need to land the game’s Scatter symbol 5 times during the same spin. Now, we mentioned earlier that there is a ‘O’ symbol among those on these reels. It doesn’t offer any payouts at all and can feel like kind of an empty symbol. However, sometimes it transforms into a golden vault, which is the game’s Scatter symbol.

Now, once you have all five Scatters in place, this will trigger a pick-me game to determine the number of free spins you will receive. Select one of the vault symbols to reveal anywhere from 5 – 30 free spins in total. After this you can even gamble your free spins to increase their number. You can just as easily lose them as a result, though, so be cautious.

During the freespins bonus round, players will benefit from the occasional double symbol on the reels. These will make for better winning chances and higher prizes. In addition, you also have the possibility to re-trigger the feature by landing another 5 Scatter symbols simultaneously. 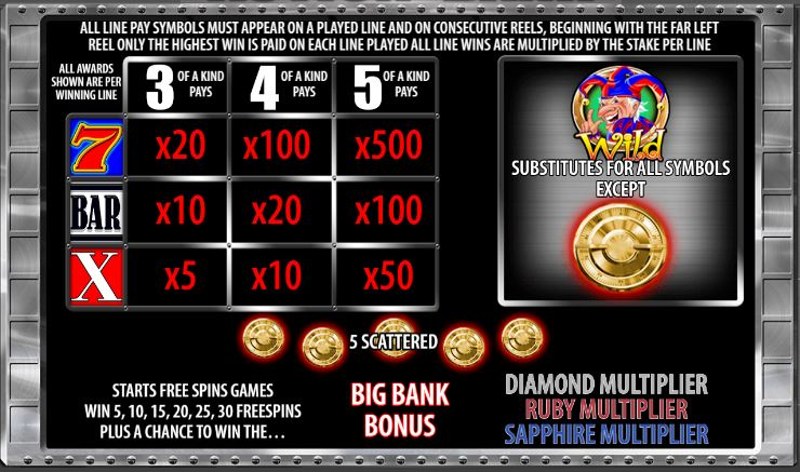 Action Bank is a decent medium to high variance offering, with higher prizes of course coming from the free spins bonus feature. It doesn’t wow you with any amazingly innovative visuals, but it does provide entertaining enough gameplay to keep you spinning those reels.