Buffalos have appeared in a large number of online slots from various developers for some reason. This Blazin’ Buffalo offering from Rival Gaming is another one to add to the collection, but does it fall in line with the rest or does it stand out as its own beast? Well, a little of both as it happens. It does stand out as being one of the more recent releases from the developer, first launching in 2015. For this reason, the game has some wonderful graphics running through it, offering up an entertaining and visually appealing slot.

The first of its symbols sticks with the more traditional route – the playing card icons from 9 through to A. Then you’ll get to see a symbol of a snake and another of an eagle. The three highest paying standard symbols of Blazin’ Buffalo are of the ram, the grizzly bear, and the wolf. The latter of these can provide maximum rewards of 2,500x your in-play stake. Therefore, it can be said that this Rival Gaming slot does incorporate some alternative imagery onto its reels.

Speaking of its reels, the game features five of them for you to spin, and there are three rows in the game as well. You will see 50 pay lines across the interface, although you do have the chance to customise these to your own preferences. Simply use the + and – buttons on the right-hand side of the screen or press the “Select Lines” button instead. Afterwards, you can alter your bet by selecting a coin value between 1p and 25p. Then, choose how many of those coins you want in effect per active pay line between 1 and 10. Doing so will allow you to place a bet of up to £125 per spin. 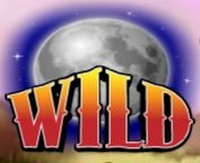 If you spot the symbol of the full moon on the reels, this is the one that operates as the slot’s wild addition. This means that it will stand in for all other symbols in the game, helping you to form winning combinations. The only symbols that it won’t substitute for are the scatter and bonus additions.

If it does manage to contribute to a winning combination, then it will also double the pay-out that you receive for it.

The first of the slot’s bonus rounds is triggered by the appearance of the bonus symbol. This is represented by the three Ace cards with the buffalo image on them. You need to spin three or more of these into view anywhere on the reels to activate it. Five of them coming into view will also ensure that you receive a bet multiplier of 20x.

The Find the Buffalo bonus round is actually inspired by the traditional card game known as Three-Card Monte. Basically, three cards will be presented to you on screen face down, and you need to try and guess which one of them has the image of the buffalo on it. Click on one to turn it over and see if you’re a winner. 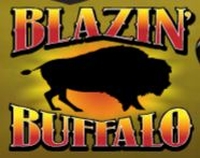 The game also has its own logo as a symbol on the reels, and it’s this one that works as the free spins scatter trigger. Three or more of them showing up will activate the free spins round, whilst also multiplying your current wager. You’ll get seven free spins whenever three of them come into view and 15 free spins for the appearance of four. The maximum of 50 will be given whenever five of the triggering symbols come into view.

Blazin’ Free Spins – During the free spins round, you may also activate the Blazin’ Free Spins function. This happens whenever three or more of the Blazin’ Buffalo triggering symbol come into view during it. For three of the symbols you’ll get two extra free spins with a triple multiplier in effect; four of them will give you five free spins; while five of them offer up 15 free spins instead. The first reel will be entirely engulfed in flames and then becomes a wild reel for the duration of the remaining spins. 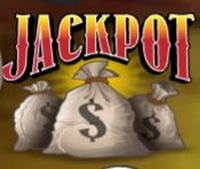 Blazin’ Buffalo gives you the chance to become a big winner with its jackpot symbol. This is present in the shape of the bags of money with the $ sign on them. You’ll win with this one whenever three or more show up anywhere, but five of them coming into view on the reels will multiply your wager by 3,000x over.

There’s little doubt that Blazin’ Buffalo is one of Rival’s best slot games to date. It just has so much to offer up to players from start to finish; the two variations of free spins, the wild symbol, the jackpot possibility, and the bonus round all make for entertaining perks that you can experience while spinning its reels. It looks great to top it off too!