Judging by the video that plays before this slot game loads up, Candy Cottage is basically Rival Gaming’s tribute to the Hansel & Gretel story. The two children in question appear on the reels as chubby-cheeked over-eaters, and of course, why wouldn’t they be tempted by the cottage made out of candy? It’s like every child’s dream anyway, but for Hansel and his sister Gretel it’s totally irresistible. Naturally, they will meet their fate when the old haggard witch opens the door and attempts to cook them alive in her oven. Yet, this isn’t a part of the story that Rival wishes to depict in its video package. That being said, there are bonus rounds which may tell more of the story.

Visually speaking, Candy Cottage has some interesting graphics with the first four of its symbols being present in the form of different types of candy. Then comes a symbol of a basket with a bread loaf in it, and another one of a goose. Hansel and Gretel along with the witch, make up the three highest paying standard symbols of the game.

You’ll get the opportunity to play on a standard video slot interface with Candy Cottage, which consists of five reels and three rows altogether. At the same time, Rival Gaming has added a set of 20 pay lines which you have the possibility of customising. Make use of the “Select Lines” button to do this. Afterwards, you are able to choose a coin value between 1p and 25p before choosing between one and 10 of these coins to be active per pay line. This means that £50 stands as this game’s maximum wager per spin. 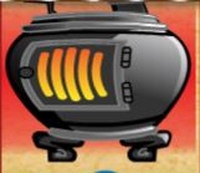 The candy cottage is owned by a witch who obviously has a desire to eat the children after cooking them alive. Her stove is the symbol that makes up this slot’s wild symbol, therefore, if it ever comes into view on the reels it will substitute for all of the standard symbols mentioned above in order to form winning combinations.

What’s more, the wild has the possibility of expanding across the entirety of the reel that it’s on should additional wins be possible on other pay lines. 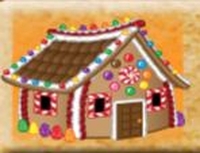 The symbol of the gingerbread house is one that you should also be on the lookout for, because it is this one that operates as the slot’s free spins trigger. It takes three or more of this symbol appearing across the reels to activate the round, and you’ll get 10 free spins to play through if this occurs.

During the free spins function, any winning combinations that you form will also benefit from the addition of a triple multiplier. So, the free spins round is able to provide you with quite a boost to your win balance. 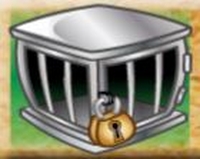 While spinning the reels you may see the cage that the witch locks Hansel and Gretel in while waiting for her stove to heat up. This is a scatter icon, so it can appear anywhere and provide a pay-out. Furthermore, it’s able to activate the game’s bonus feature round whenever three or more of them come into view in any position.

During this bonus round, you will need to move Hansel and Gretel around in order to catch various candies. Each of these candy pieces has a value to it, which will be turned into a cash prize once the bonus round comes to an end. 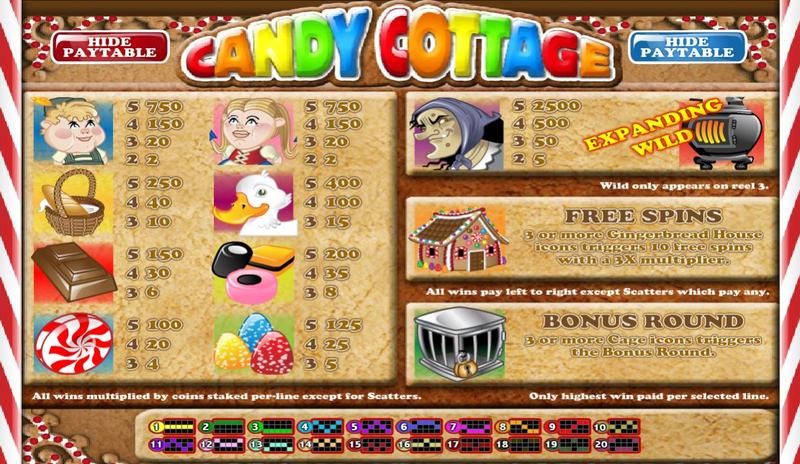 Fairy tales have often been utilised for the base theme behind online slots, and we’re certain that Hansel and Gretel has also been used once or twice before. However, due to the fact that this game was created back in 2010, it’s possible that this Rival Gaming creation was one of the first to think of it. With the inclusion of the bonus round, the free spins and the expanding stove wild, Candy Cottage also holds much more appeal than some of the others. Rival has certainly crafted an intriguing offering with this one, and the graphics that it includes make it even more so.