You’ve all heard of the Cirque du Soleil, right? Well, perhaps it’s time that you also became acquainted with the Cirque du Slots. It’s every bit as entertaining and daring as the former, but it brings its own sense of good fortune to you, too. If we’re honest, we love going to the circus, and that’s pretty much what this Rival Gaming slot puts forth; acrobatics, contortionism, tricks and performances that will blow your mind are all part of the experience.

Rival Gaming has made sure to include some wonderful graphics into this game, too. Therefore, the Cirque du Slots slot machine is a visually stunning setup. Upon the reels of the game you’ll see the playing card symbols that run from 9 through to A as the initial additions. There’s also a symbol of juggling sticks and another of a colourful balancing ball. The next of the slot’s standard symbols are the masquerade mask and the clown’s hat. The latter of these can pay out up to 300x your in-play bet. Yet it’s the top hat and the circus performer in purple body paint that operate as its highest paying additions.

Should you choose to enter the Cirque du Slots online game, then you’ll see a layout that is made up of five reels and three rows. This acts as a standard video slot design, and Rival has also taken the opportunity to add a set of 25 pay lines into the game as well. You’re able to alter the active amount of these just by using the “Select Lines” button at the bottom of the reels. Your bet is changeable by first of all choosing a coin value between 1p and 25p, then simply pick how many of these coins you want in play per active line between one and 10, and you’ll be able to place a maximum overall wager of £62.50.

In our opinion, it would be a crime if an online slot game by the name of Cirque du Slots didn’t have a wild symbol. That’s why it’s very nice to see one incorporated onto its reels. This is the performer in green body paint, and if she shows up on anywhere on the reels she’ll substitute for all the other standard symbols mentioned above, helping to form winning combinations.

If this does occur then the wild will also make sure that your pay-out for such receives a triple multiplier. Furthermore, if there’s the possibility of forming additional wins, then the wild will expand across the entire reel that it’s on. 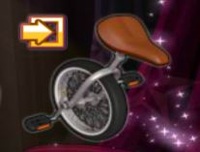 Make sure that you keep a close eye out for the arrival of the unicycle symbol. This one operates as the trigger for the Next Act feature. You’ll need to spin three or more of them into view for this to take place which will first multiply your wager by a pre-set amount, which can be up to 25x.

Then, you’ll advance on to the next act of the show. This changes the backdrop and the icons that come into play on the reels. 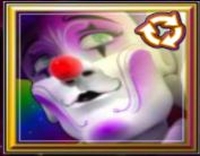 During regular gameplay, you may also see the symbol of the very creepy clown come into play. This operates as the free spins scatter addition, and when three or more of them show up you’ll activate the free spins round. Initially, the Cirque du Slots game will provide you with seven free spins from this in total. During this round, the wild symbol has alternative expanding features depending upon whether you’re on Act 1, 2 or 3.

We can honestly say that we love the Cirque du Slots game from the Rival Gaming brand. Not only does it provide players with high-quality graphics throughout, but it also introduces some truly entertaining features. The best of these is, of course, the wild which can expand in different directions during free spins. And you’re even able to advance onto alternative acts of the performance to keep things fresh. It’s a great addition to this developer’s set of games.