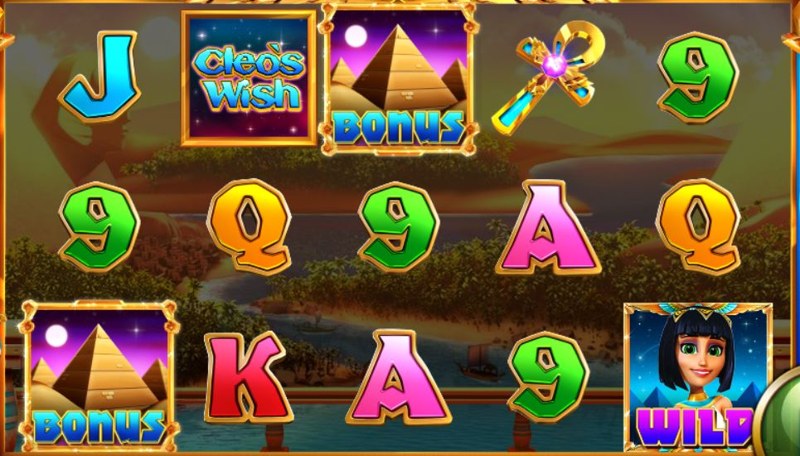 Cleo’s Wish doesn’t refer to just any old Cleo – this online slot game has its focus and the legendary Cleopatra of Egypt, and as you will see, her majesty stands right beside the reels looking as lovely as can be. The semi-transparent reels open up the view over an oasis of sorts, with lush gardens and pyramids sticking out of the ground. There’s a very casual, piano bar-style soundtrack playing in the background, so the atmosphere is very light and laid back and you wouldn’t really be able to tell it’s an Egyptian-themed offering at all if not for those pyramids. In fact, that typical adventure vibe you get in this genre is completely gone.

Now, you will notice the layout in Cleo’s Wish is fairly basic, featuring 5 reels and 3 rows. It comes with a total of 25 paylines, however, these are fixed, so you won’t have the chance to adjust them or play with a lesser number. Furthermore, the stakes here start slightly higher than what you may expect, making this a bit of an expensive offering. The minimum bet will set you back a total of 30p per single spin, but the maximum bet doesn’t quite extend to the same fantastic heights. It will only set you back a total of £30 per spin.

Cleo’s Wish has a whole bunch of special features in store for you, explaining the somewhat higher stakes. In fact, three of the special features are random ones and they can take place at any point during the game.

The first of these is the Sands of Fortune feature. This feature will turn all high value symbols into one matching icon. Then there’s the Guaranteed Wild Reels feature, which basically speaks for itself. It can turn up to 5 reels fully Wild for the duration of a spin. Then finally we have the Added Wild feature, which will add extra Wilds to random positions on the reels. 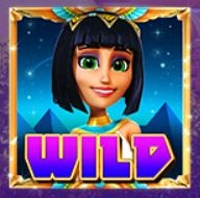 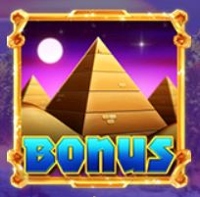 Look out for the Scatter symbol appearing only on reels 1, 3 and 5. If you land all three of them at the same time this will trigger one of the two available Freespins features. The first option is the Cleo’s Parade Freespins round. It basically awards you an unlimited number of free spins with a full stack of Wilds on the rightmost reel. On each spin, that Wild reel will move one position to the left, and from then on more Wild reels can also occur throughout this bonus game. Furthermore, if you land another 3 Scatter symbols at the same time, reel 5 will turn fully Wild again. The feature will end once there are no more Wilds on the screen.

Then there’s the second option, the Eternal Riches Feature. Here you will receive a random number of free spins between 5 and 10. Notice also the Super Spins Win Multiplier Meter on the screen (say that quickly 3 times in a row). Every time you land a Wild symbol it can add up to three counts on that meter up to a maximum of 20x. In addition, Scatter symbols will add up to three spins to the Super Spins Meter. Once you have played all of the regular free spins, the Super Spins will begin with whatever multiplier you have on the other meter. 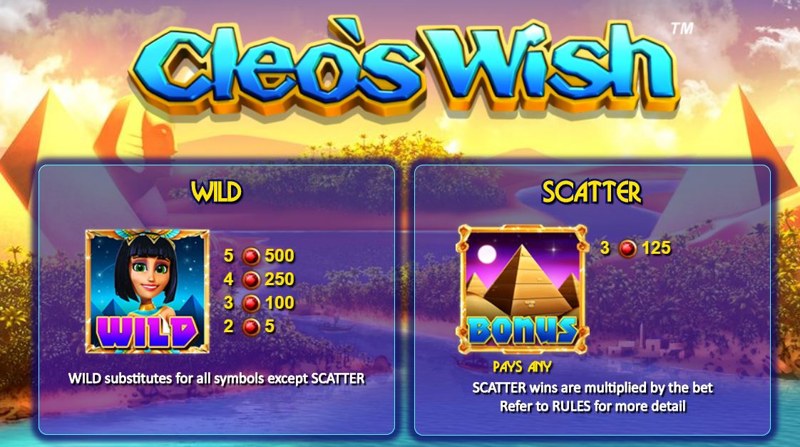 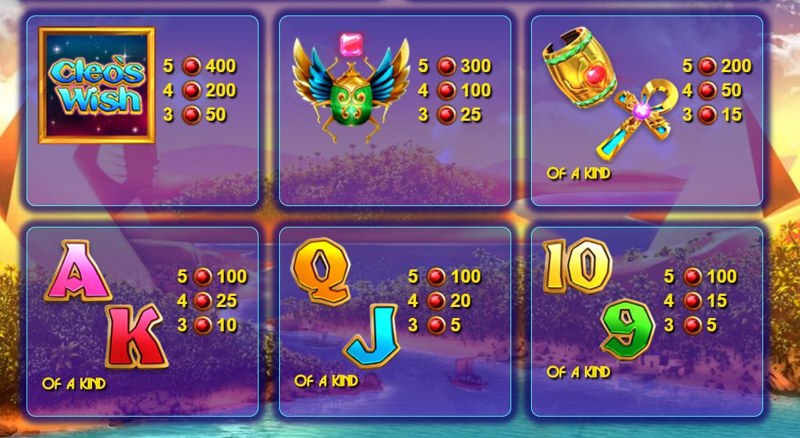 Cleo’s Wish is an amazing online slot game by NextGen Gaming. It boasts both great, high quality visuals, as well as a feature-packed setup. It’s also a pretty volatile offering, so wins can be very big, especially in the free spins.