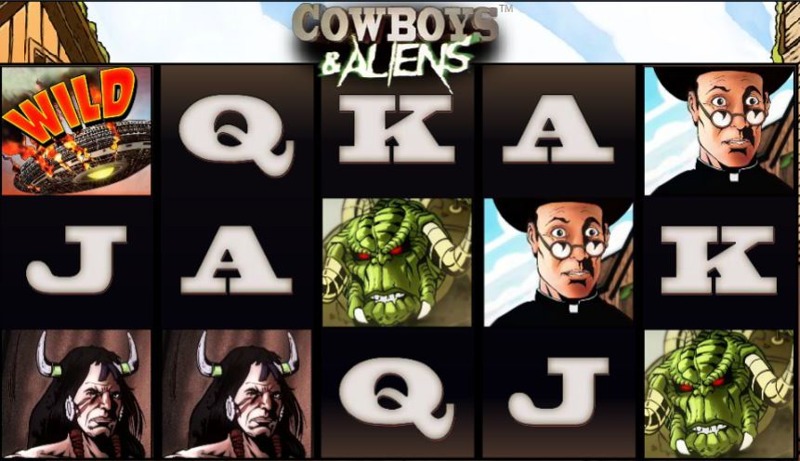 Based on the popular graphic novel of the same name, Cowboys and Aliens is an online slot game by software manufacturer Playtech. The visuals are in keeping with the graphic novel itself, which will be especially pleasing to fans of the genre. However, if you’re only familiar with this title because of the movie then you might actually be confused by thism – but it’s probably safe to say that Playtech’s take on it is more successful one than the motion picture. Even if you aren’t that big of a fan of the graphics, the setup won’t disappoint. The game will take you to something of an old western ghost town, and besides the lower value playing cards the symbols depict an alien, a preacher, cowboys and a Native American Indian.

Now that’s all out of the way, let’s move on to the game’s layout. It is pretty conventional as it features a grid of 5 reels and 3 rows, and you will find that this grid has a humble amount of only 9 active paylines. The paylines are also fixed, which implies that you will not have the opportunity to decrease their number. Given the betting range, you won’t really have a reason to either. Stakes start off at a minimum of only 9p per single spin, and the maximum amount you will be able to wager on these reels will set you back £45 per spin.

As we pointed out, the setup in Cowboys and Aliens will not disappoint. That’s mainly due to the fact that it boasts a whole bunch of special features. 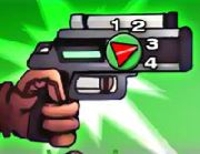 One of them is the Alien Weapon Feature, for example. You will be able to trigger it by landing the Gun Bonus symbol anywhere on reel 1. As a result, you will see the pointer on the gun randomly turn to a number from 1 to 4. That number will correspond to the number of symbols that the gun will shoot, and those symbols will then turn into Wilds. 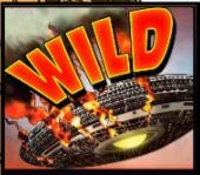 The Wild symbol can potentially be worth 10,000 coins in payouts. It can land in any position on any of the five reels during gameplay, but most importantly, the Wild will be able to substitute for any of the other symbols in view. It can, therefore, help create more winning combinations throughout gameplay. However, the Wild won’t be able to replace any of the Bonus symbols or the Scatter. 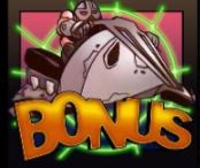 Look out for the Bonus symbol landing anywhere on reels 1 and 5 simultaneously. This will trigger the game’s Alien Attack Bonus Feature, taking you to a new screen and also a battlefield. It will be up to you to decide which alien to kill once they attack. They will come in three separate waves, and each wave will have several aliens. Choose the one you want to go after and also select the weapon you want to use.

If you kill the alien you will receive a cash prize, extra ammunition or a 2x multiplier. Once you’ve killed all of the aliens, the feature will come to an end. Alternatively, it will end when you’re out of ammo. In the event of the former, any leftover ammo will award you an extra cash prize. 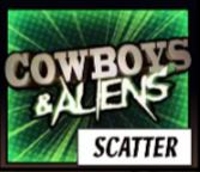 Last but not least, we have the Freespins Feature. You can trigger it with the help of the game’s Scatter, which unlike the other Bonus symbols can land anywhere on the screen. But you will need to land at least 3 of these at the same time to activate the freespins, of which you will receive 8. In addition, these will come with Comic Strip Wilds. You will notice that for every free spin, there will be a highlighted area on the reels, and once the reels stop spinning, a Wild will appear in that highlighted part. 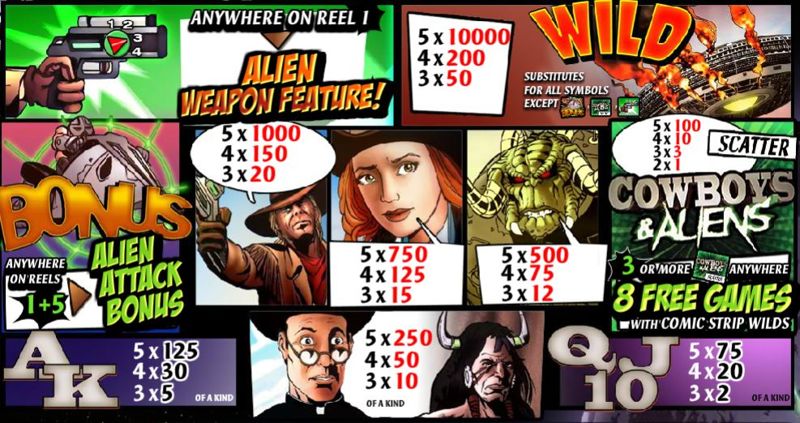 Cowboys and Aliens is a very pleasing offering with plenty of entertainment to go around. However, it’s low variance, so big wins won’t really be on the horizon.