Plenty of online slot developers have created their own vampire-themed games. It’s one of the most popular genres to utilise, and it wouldn’t be surprising if every developer out there had at least one vampire game. Dark Hearts is Rival Gaming’s attempt dedicated to this theme and we have to say, it does it very well. The overall setup and graphics that are included within Dark Hearts complement each other, and you’ll hear a heartbeat as each spin of the reels comes to a stop. There’s a lot more to the game than its external appearance too, but we’ll look into those features shortly.

The first of the slot’s symbols come in the form of the playing card additions, which have all been given a gothic feel. Then comes a pink rose as another symbol, while the vampire Markus appears as well. The two higher paying character symbols are present in the shape of the second vampire, Viktor, and the female character known only as Willow. Following on from these are a bejewelled cross, a goblet filled with blood and, finally, the game’s own logo, which can multiply your wager by up to 1,250x.

Everything takes place on a layout of five reels and three rows. This is a standard layout for an online video slot, but Dark Hearts has a set of 243 ways for you to win included, and this is not so traditional nor is it a part of the game that you have the ability to customise. You can still change the value of your bet though. You’re able to select your coin value choosing from amounts between 1p and 25p. Then, select how many of these coins you would like to be in action per spin between one and 10 to reach a maximum bet of £75 per spin.

There’s the inclusion of a wild symbol in this game, which is represented by the vampire fangs over the word ‘WILD’. If this one comes into view on the reels, it will replace any other of the standard ones mentioned previously.

This assists you greatly with forming winning combinations across the reels. Scatter symbols are the only ones that the wild will not count for, but it can be a very welcome site when you are only one symbol away from a winning payline. It certainly has some bite. 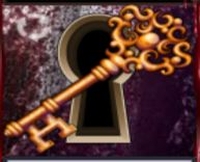 Dark Hearts makes a very nice vampire-themed online slot game, and it really can compete with those created by other developers. The fact that you get to choose between three different free spins rounds when you trigger the feature in this slot makes it even more appealing to players, then, with the inclusion of a wild symbol alongside as well as the fact that there are 243 ways for you to win, it really stands out. We’d recommend Dark Hearts as one of Rival Gaming’s best slot releases.