The Vikings may be known more for their invasions of various countries, including England, however, they also tended their own lands and, as Rival Gaming wants us to believe, they also went digging for gold and treasures in their own mines. So, if you’d like to join them in searching for gold, you’d better grab your pickaxe.

A bucket of gold can be seen as the first symbol on this game’s reels, while a cluster of gold embedded in a rock can be seen as another. A mine cart and a shovel make up the next two symbols in Diggin’ Deep, while a wheelbarrow can also be found on the reels. You’ll also get to utilise a hammer as another symbol, with the pickaxe forming another. Last of all, there’s a symbol of a lantern, which will help you find your way through the dark mine caves.

It also features a standard video slot layout of five reels and three rows though, so it should also have that familiar feel to it. Alongside that, there are 20 pay lines for you to bet on, but you can reduce the active number as you like. The bet that you bring into play is also changeable; choose a coin value between 1p and 25p, then select how many coins you want in operation per line between 1 and 10. This means that the Diggin’ Deep slot machine offers up a maximum bet possibility of £50 per spin. 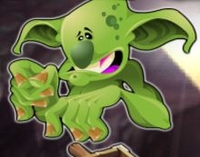 Anyone who goes mining will be wanting to hit the jackpot, right? In this slot game though, the symbol of the troll is the one that operates as its jackpot addition.

You’ll need to see three or more of this one come into view anywhere to receive a jackpot pay-out, but five of them showing up on the reels will multiply your in-play stake by 1,000x. 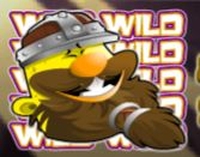 The excitement of finding gold has obviously affected the Viking in this game, because the wild symbol depicts him with a huge smile across his face. Wherever he appears, he will substitute for the other standard symbols in the game.

That’s not all that is possible with this symbol though, because when additional wins can be formed by him expanding to cover the reel, he will do it. A 1x multiplier is in operation during base gameplay, but this multiplier increases to 2x during free spins, and in the Dig for Gold Super Round it increases again to 3x. Keep in mind that the expanding wild symbol will only show up on reels one, three, and five. 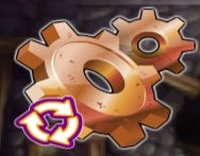 To ensure that the mine is operating at a fully functional level, a few gears and cogs have to be in place. The symbol of these cogs is what works as the slot’s free spins scatter.

Three or more of these showing up anywhere on the reels will trigger the free spins round, with up to 50 free spins potentially available to you.

Should three or more of the gold ingot symbols come into view the Dig for Gold Bonus Round will start. This will provide you with an alternative screen filled with purple-coloured dirt. Simply start at the top of the screen and dig through this dirt to create your mine.

Work your way deeper into the dirt, searching for gold as you go. You’re also able to find diamonds within, with both treasures rewarding you with additional coins. 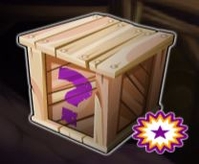 During the free spins round, once the Viking miner activates the conveyor belt, three or more crate icons may show up. This is known as the Pick a Crate Bonus Feature.

You simply to need to choose one of the three crates that appear in order to win a selection of bonus coins. 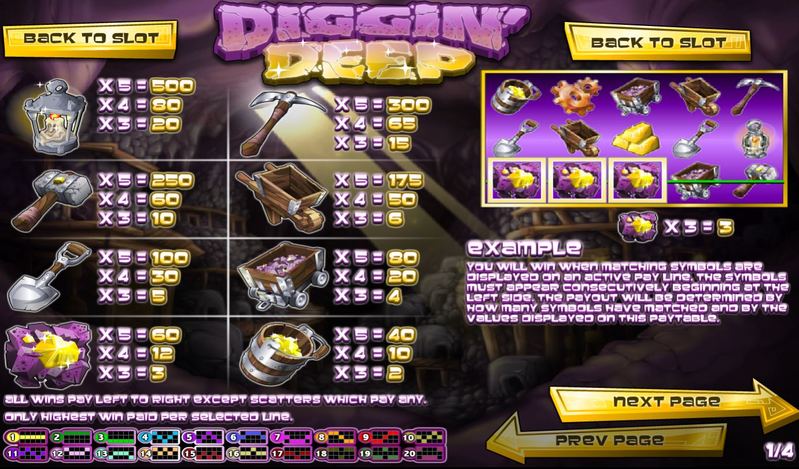 Diggin’ Deep from Rival Gaming is one of those slots that will have you hooked from the moment that you play it. The graphics stand out and compliment the them perfectly, while the horde of inbuilt features make it even more entertaining. Overall, it’s a great slot game from this developer and we recommend it to all avid slot gamers.