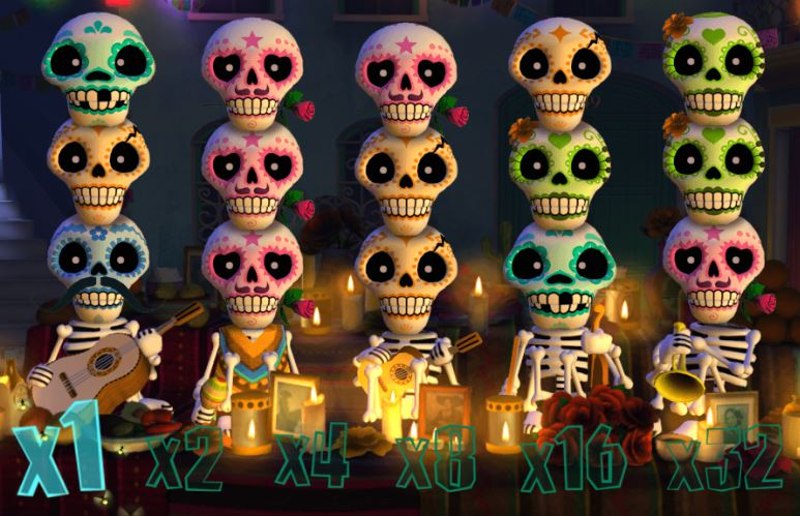 There are a few online slot games out there that have the Mexican Day of the Dead as their theme, but Esqueleto Explosivo by software developer Thunderkick takes it to the next level. This offering is both festive and terrifying at the same time. First of all, the reels are literally a bunch of skulls stacked on top of each other and resting on skeletons, and if you have a good look at the skeletons, you will notice they all have some form of musical instrument in their hands. Furthermore, the skulls like to demonstrate their love for music too, when they form winning combos. You will see them sing, after which, they will sadly explode.

Looking past the amazing graphics and slightly morbid setup, let’s dissect the game’s technical spec. First off is the layout, which features 5 reels and 3 rows (of skulls). There are 17 paylines, which isn’t your typical number, but it comes up quite often with Thunderkick offerings. The paylines are also fixed but the stakes are well within reason and start at a minimum bet of only 10p per spin. As for the maximum possible bet, it will set you back a total of £100 per single spin. Note also the alluring jackpot of 1,000 coins.

Esqueleto Explosivo uses the Dropping Symbols engine, which is what determines how the winning combinations are made. Once you have landed 3 or more matching symbols on an active payline they will disappear, and this will in turn make way for new symbols to fall in their place. Hence, more winning combinations can occur and this will allow you to make the most out of every spin.

On top of that, however, be sure to keep an eye on the multiplier range below the reels. Each time you land a win during the same spin, the multiplier will increase one level. It starts off at 1x, and then increases to 2x, 4x, x8, 16x and a whopping 32x. 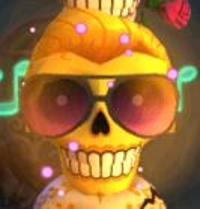 Look out also for the fabulous skull with the sparkle and sunglasses. This is the game’s Wild symbol, and it’s not just any Wild either. It is the *insert drumroll here* Explosivo Wild. It can appear in any position, anywhere on the reels, at any point during the game; and when it does, it will explode, taking with it the 8 symbols around it. As a result, this will trigger a Symbol Drop and will also boost the multiplier meter.

Visually, Esqueleto Explosivo looks absolutely amazing. The graphics are high definition and boast really cool animations. To be honest, the design itself makes up a great portion of the entertainment factor in this online slot game. However, as far as gameplay goes, it’s very, very basic. The setup revolves around the Dropping Symbols feature and that is pretty much the only attraction that this title has in store. Nonetheless, this doesn’t prevent the game from being fun to play.