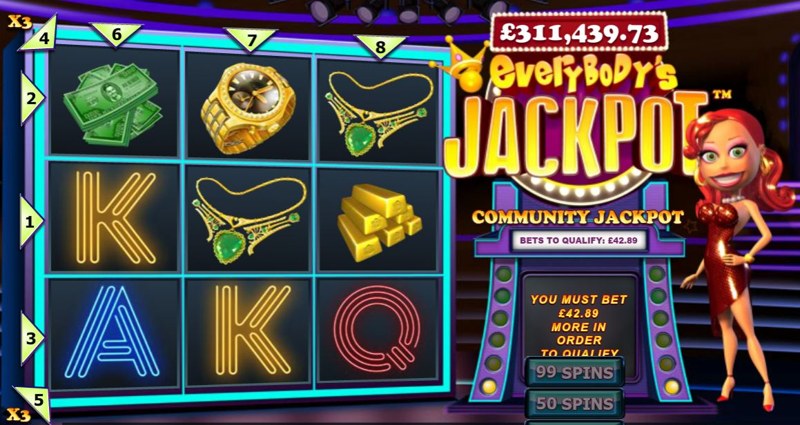 Everybody’s Jackpot is an online slot game by software manufacturer Playtech. It’s also a very popular title and the reason for that is mainly due to the progressive jackpot attached to it. Aside from that, the visuals are pretty pleasing, with high quality graphics including the 3D hostess who is as glamorous as she is cartoonish. The setting appears to be a game show – you can see the projectors in the distance, there are neon lights everywhere, and of course, the reels on the screen are both your game and the show’s game.

Speaking of reels, you will notice that the layout in Everybody’s Jackpot is actually more of an old-school style slot game. In other words, the layout is really quite basic. It boasts only 3 reels and 3 rows, so the grid is shaped like a square, and there are only 8 paylines for you to place your bets on – which is a rather unusual number too. However, the paylines are fixed, and this means that you will not have the opportunity to adjust them to your liking. This also affects the betting range accordingly; so the minimum bet will set you back some 8p per spin and the maximum possible amount you will be able to wager here is £40 per single spin.

As you can tell from the title, the Progressive Jackpot is really what players will be after when playing this game. This is a randomly awarded jackpot, though, and the developers have designed it so that more than just one person can benefit from it. If you, for example, win the jackpot, you will receive 70% of the pot. Then 15% of it will be distributed among the other qualifying players. The remaining 15% will go to all players who had qualified in the last 24 hours. However, the amounts for each player will be proportionate to the amounts they had wagered. 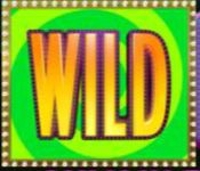 Believe it or not, Everybody’s Jackpot actually comes with a Wild symbol. It’s an unusual attribute for a retro style slot game, but it’s here nonetheless, and as is customary the Wild will be able to replace any of the other symbols on the reels to help complete winning combinations. The only thing is that the Wild can only land on the screen during the Freespins Feature (yes, there is one of those, too) and only on the middle reel. Furthermore, it will also not be able to replace the game’s Scatter. 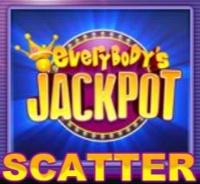 Freespins are also a very uncommon occurrence in these types of offerings, yet you will have the opportunity to benefit from 12 freespins in Everybody’s Jackpot. You can receive them if you land at least 3 Scatter symbols in any position on the screen. What’s more, you can keep retriggering the freespins feature an unlimited number of times. To do this, you will again need to land 3 or more Scatter symbols simultaneously during a spin. 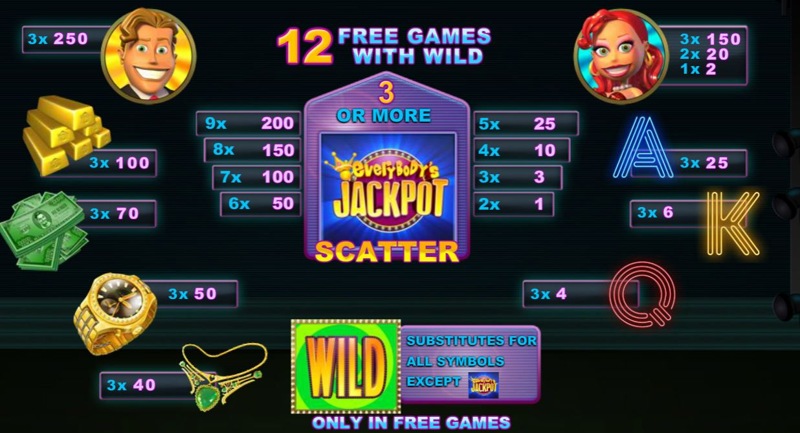 Obviously, the Progressive Jackpot and its inclusive structure are what make Everybody’s Jackpot so popular, but gameplay itself is also quite exciting- so don’t let the fact that it’s a seemingly basic offering lead you to believe otherwise.