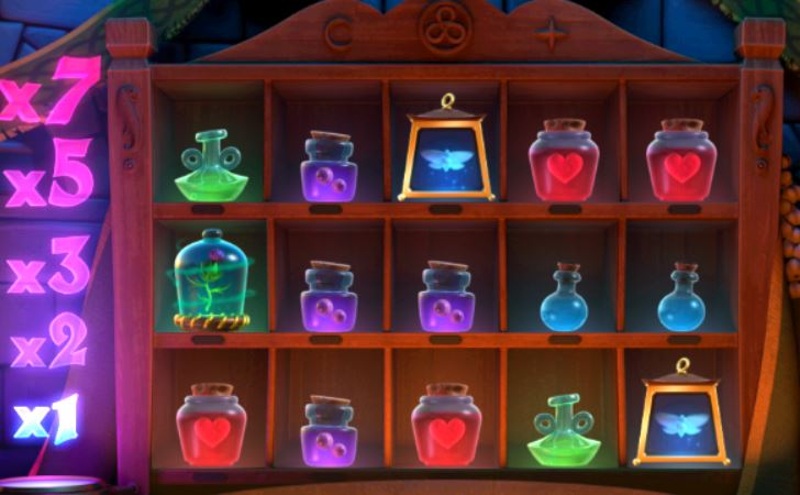 “Double, double toil and trouble, fire burn and cauldron bubble…” If you’re up for some witch’s brew and the concoction of magical potions, you’d best check out Frog Grog. This is an online slot game by software developer Thunderkick, and as such, it boasts the most amazing visuals. High quality graphics as well as a compelling design are the name of the game, and once said game loads, you will find yourself in the eerie chambers of a witch or alchemist (but most likely a witch). The reels are rows of jars on shelves harboring all sorts of gruesome ingredients. There are hearts, eyeballs, flowers, moths and suspicious colorful liquids. Oh, and be sure to keep your sound on, because the music is important for the ambience.

Now as for the layout, there are 3 rows of shelves and a total of 5 reels. So, it’s your common slot game layout, and it comes with the unusual number of 23 paylines. All paylines are fixed, though, and therefore they will not be subject to adjustment on your part. However, if you have played other Thunderkick offerings, you know that stakes are within a standard and fairly wide betting range. They start pretty low at only 10p per spin, and the maximum bet will cost players some £100 per single spin.

Frog Grog uses the Dropping Symbols engine, which is a great way to make the most out of every spin. The point of the feature is that every time you land a winning combination of symbols, those symbols will disappear, and once that happens, their place will be taken from the above symbols that will drop down, hence the name. This allows for the opportunity to land subsequent winning combos during the same spin.

Notice also the glowing multiplier values to the left of the reels. These have everything to do with the Dropping Symbols feature. With each consecutive symbol drop, the multiplier for that spin will increase one step, and the available values are 1x, 2x, 3x, 5x and 7x.

The freaky-looking frog in Frog Grog is the Wild symbol. It will be able to substitute for all of the other icons, without any exceptions; that way it can help complete sequences of winning symbols and therefore boost your payouts. But that’s not all. The Wild can appear in any position, anywhere on the reels, and once it helps with one winning combo it will destroy all symbols on both its reel and its row – thus, it will make way for new symbols to land on the screen. Furthermore, the Wild will remain on the reels as a Sticky Wild until it partakes in another winning combo. For ease of distinction, the Sticky Wild will change color from orange to blue.

Last but not least, Frog Grog also happens to have a randomly triggered special feature. It can take place at any point during the game and the only condition is that no symbol drop can occur. Once active, the Mystery Game will remove all icons from the reels bar the Moth, Flower and Wild symbols.  These removed symbols will then reward you as per the paytable, and after that new ones can fall into their place.

Frog Grog is a fantastic title by Thunderkick, offering a great balance of visuals, features and payouts. You can potentially win up to 1,616 times your stake on any of the spins, which is great, and you can enjoy this rich and vibrant theme while you’re at it.