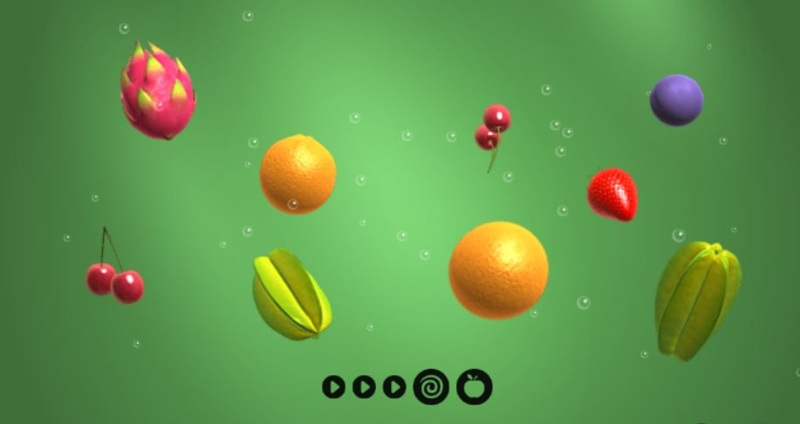 Fruit Warp is an online slot game by software manufacturer Thunderkick, and we promise you that it’s unlike any other slot game you have played so far. But before we get into why that is, let’s just have a quick look at the design first. To begin with, the visuals are of course outstanding, and we would expect nothing less from this developer. The graphics are impeccable, featuring 3D fruit symbols and a quaint, non-distracting plain green backdrop. As for the fruit symbols, some you will recognize from traditional slot machines, but most are actually of a more exotic kind, like bananas, dragon fruit, durians and more. In addition, there’s a very chilled soundtrack that will nicely compliment gameplay.

This now brings us to what makes this game so wildly unusual, in comparison to the majority of slots out there. You will notice that the symbols seem to be just randomly floating about without any structure, and that’s precisely the point. There is no layout here. Reels, rows and even paylines are completely obsolete in this title. To land wins, you need to simply land 3 or more matching symbols during a spin, and it doesn’t matter where exactly these symbols appear in relation to one another. With that in mind, the stakes here are within Thunderkick’s standard range. They span from a minimum of 10p per spin and up to a total of £100 per single spin.

Since the structure in Fruit Warp appears to be so chaotic, traditional special features are also out the window. There are no Wilds, no Freespins, no pick me games or other such conventional bonus rounds. Instead, gameplay here mainly revolves around landing larger combinations of matching symbols.

For example, whilst 3 matching fruits will give you a win, they won’t offer anything beyond that. However, if you land 4 matching icons, this will trigger a re-spin for the symbols that are not in the winning combo. Hence, it will give you the opportunity to land more wins from the same spin.

The Fruit Modes are the main attraction in this online slot game. And you can trigger this feature by landing 5 or more matching symbols. At this point, the backdrop will change color and a Warp Meter will appear at the bottom of the screen. If you land so much as just a single symbol that matches the triggering one, you will move one step in the meter. Naturally, more symbols of the same type will boost you a corresponding number of steps.

Furthermore, landing a triggering symbol will also automatically trigger a re-spin. So, as long as you keep landing icons of that type, the feature will continue. As you progress along the Warp Meter, you will encounter dynamic multipliers. These increase with each win, and once you reach them they lock in place until you reach the next one. Hence, they will affect whatever wins you land in between.

In addition, you can come across Extra Lives, as well. These are helpful, because they can save you if you happen to land a non-winning spin. In this case, instead of ending the Fruit Modes, you will get an extra re-spin and the chance to continue along the Warp Meter. The only thing about the Extra Lives, though, is that they won’t move you along the meter themselves.

Although extremely unconventional, once you get the hang of it, gameplay in Fruit Warp is very simple – it’s also a lot of fun. The graphics are as sharp as ever, and it’s always a treat to try something innovative in terms of structure. Plus, that structure can prove to be very rewarding, especially if you can keep the re-spins going for a longer time.