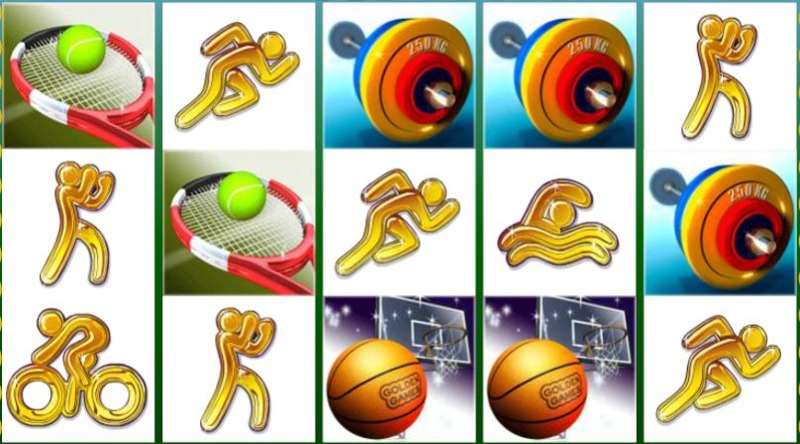 Golden Games is a sports-themed online slot game by software provider Playtech, and it takes the Olympics as its focus. Players will get to enjoy a little bit of everything on the reels of this offering; there are discus throwers, weight lifters, tennis players, and for those team sports fans among you there’s even some basketball. Other symbols on the reels include a stopwatch, a gold medal and a fire. Then we have the lower value icons, which are literally golden stick figures representing other sports such as cycling, boxing, fencing, sprinting and swimming. The setting is in the middle of a large stadium, and we’d like to draw your attention to the pretty graphics in this game, even though this title was released a decade ago they still stand up.

The layout in Golden Games doesn’t stray from what’s considered to be the industry norm; you will be looking at 5 reels and 3 rows and these come with a total of 25 active paylines. The paylines are subject to adjustments, though, if you would prefer to play with a lesser number. This makes for a very generous and inclusive betting range, starting at a minimum bet of only 1p per spin. The maximum bet, on the other hand, will set you back a whopping £1,250 per single spin. Hence, there’s room for both high rollers and penny players alike.

Golden Games boasts its very own Gamble Feature, which is a fun way to diversify gameplay. If you feel lucky and think you could improve your win after a successful spin, the option will be right there waiting for you. It will present you with a simple card game, during which you have to guess the correct card color. A correct guess will double your amount, whereas a wrong one will see you lose it and will end the feature. 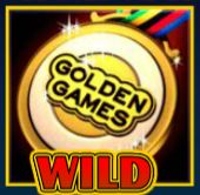 Keep your eyes open for the gold medal symbol as this is the highest paying icon on the reels, landing five of these on an active payline will grant you a prize of some 10,000 coins. But what’s more is that this symbol actually also doubles as the game’s Wild, and as such, it can help replace other icons to complete winning combos. Furthermore, the Wild will be able to land in just about any position, anywhere on the reels. It will not be able to substitute for the game’s Scatter icon. 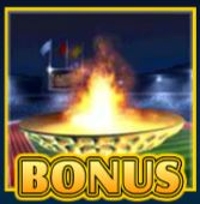 Contrary to what you may be thinking, the Scatter doesn’t trigger this game’s single bonus feature. That is the Bonus symbol’s job. More specifically, it can activate the Freespins Feature if you land it on both reels 1 and 5 at the same time. This will result in you receiving a total of 20 freespins, and better yet, the freespins come with a 2x multiplier. So in other words, all winnings from the bonus round will be doubled. To top it off, players will have the opportunity to retrigger this feature and gain another 20 freespins. Just land the Bonus symbol on reels 1 and 5 simultaneously again, and increase your total to 40 freespins. 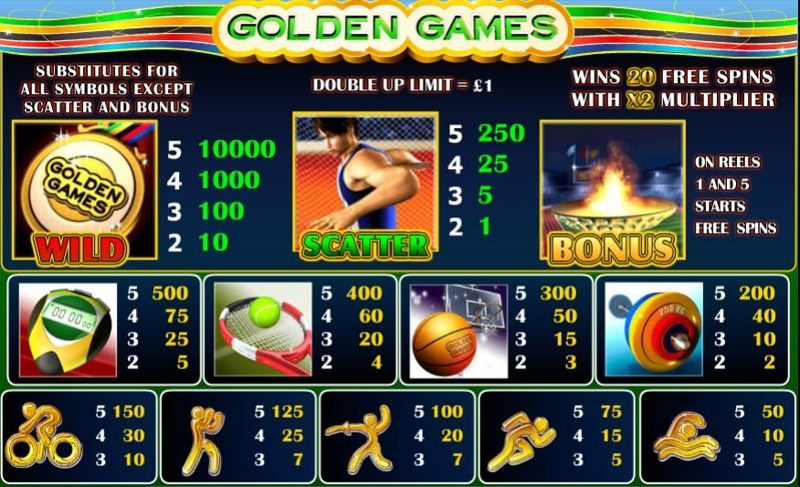 Golden Games doesn’t have a whole bunch of special features to offer, but what it does have is decent and can land you some solid wins anyway. The theme is fun and will appeal to sports fans.