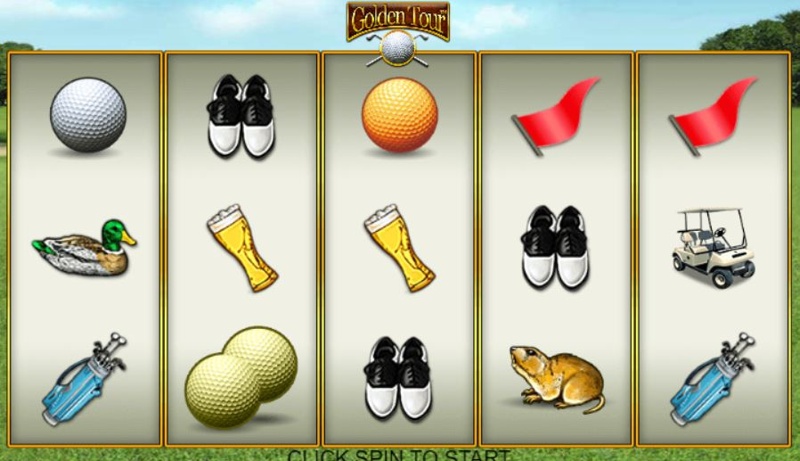 Golf fans, there is finally a title that really captures the spirit of the game and it’s a wonderful edition from software developer Playtech. The name of the game is Golden Tour and it has a characteristically laid back vibe to ensure you feel like you’re at a golf course. Seeing as this isn’t Playetch’s latest release, you may notice that the visuals aren’t quite as fancy as most games tend to be today – the graphics are cartoonish and not 3D – but that shouldn’t spoil your gaming experience at all. The backdrop will take you straight to the green, and you will even see a player in the distance peacefully calculating his next shot. As for the symbols on the reels, these mainly include golf balls, carts, shoes, clubs, flags and even a pint of beer.

Now as for the layout, it boasts your regular 5 reel by 3 row grid. There’s hardly anything special about it, including the fact that there are only 5 paylines for you to be on. But if even that seems like too much, then you are also free to select a lesser number. Therefore, stakes here are well within an affordable range, starting off at a minimum bet of only 1p per single spin. The maximum bet, on the other hand, is a total of £5 per spin.

Before we head over to the other special features in this title, let’s first point out that Golden Tour is part of Playtech’s Dollar Ball game. This means that anyone playing can potentially win a massive progressive jackpot. However, if you really want to partake in the game, you will have to enable this option yourself, and it will also come at an extra cost per bet. 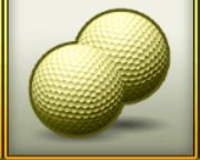 The Wild symbol in Golden Tour is an odd one. It can land anywhere on the reels but it only acts as a Wild in relation to the other golf ball symbols. Hence, it will be able to replace only them in order to complete winning sequences. In addition to that, the Wild is also very lucrative – in fact, it’s the most lucrative symbol in this game, and with its help you can pocket up to 2,000 coins.

There are actually 3 different Scatter symbols in Golden Tour. Each of them comes in the form of a small animal that you may come across living in the grounds of a golf club; you have a gofer, a duck and a fish. All three of these Scatters can land anywhere on the screen during gameplay, but you will need to land three matching Scatters on adjacent reels in order to trigger this title’s Bonus Game and main attraction.

When you trigger the feature you will enter a new screen with a complex pick me game. You will have three selections to make from three different club types: a driver, an iron and a putter. Then, you will get to watch the shot made with your selection of clubs. Depending on how well it goes, you will receive a certain cash amount as your prize.

Golden Tour may seem very peaceful and tranquil at first, but it’s actually quite fast-paced and delivers a bunch of small wins pretty much all of the time. The bonus feature is where you can potentially land a somewhat bigger prize, though, and of course it’s the progressive jackpot that really ramps up the appeal of this Playtech offering.