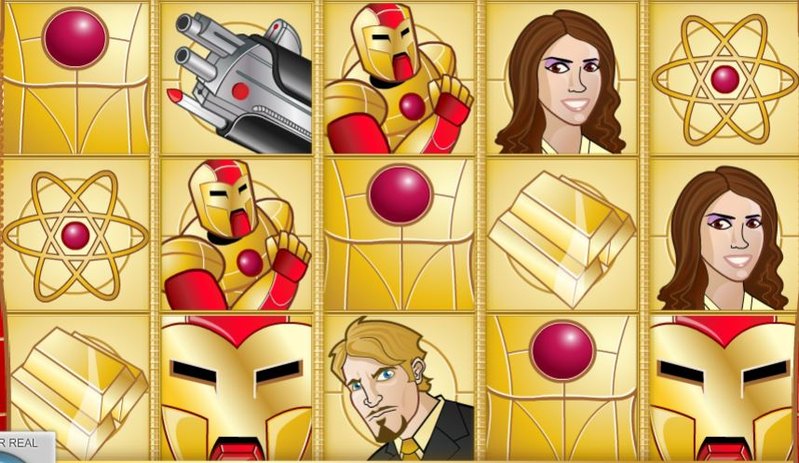 As soon as you load this online slot game up, you’ll be able to tell where Rival got their inspiration from. Clearly, it’s a blatant rip-off of the popular superhero Iron Man. The outfit that the game’s titular character wears is pretty much exactly the same as that worn by tony Stark. But what metal is more precious than iron? Gold, of course. So, clearly Rival looks to make Goldenman not only a rival to the famous Marvel character, but something above and beyond. The question is, does the game live up to expectations?

Well, everything takes place on a very standard video slot layout. This means that you can spin five reels and three rows alongside. Across this interface, Rival Gaming has added a total of 20 pay lines, although these lines are not set in position, so you have the possibility of customising them easily enough. Just make use of the ‘Select Lines’ button to do this. After that, you can change the value of your bet per spin by selecting a coin value between 1p and 25p. Then, simply select how many coins you want in action per active line between one and ten to wager a maximum of £50 per spin.

Rival has added some fun graphics to the Goldenman game, too – the entirety of the screen is pretty much decked out in the colour gold, surprisingly enough. Meanwhile, upon the five reels you’ll see the slot’s various symbols. They start with the universal icon for an atom, followed by a stack of gold ingots. Then comes a close up of Goldenman’s suit of armour. The next symbol is a shot of Goldenman in action, which can provide maximum rewards of 100x your bet. Another symbol is present in the form of a gun, while two civilians seem to appear next. The highest paying standard symbol is that of Goldenman’s foe though, who will offer maximum rewards of 300x your bet. 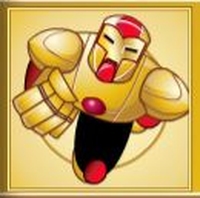 We’re always going to enjoy online video slots that come with additional perks, such as the bonus round that exists within Goldenman. Rival has set this to become active whenever three or more symbols of Goldenman flying through the air come into view across the reels.

These can show up in any positions, as the bonus symbol is a scatter. In this round you’ll get to take shots at your enemies, and if you’ve been playing with maximum coins and pay lines, you receive an extra shot in the feature. 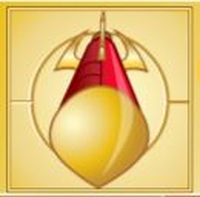 During normal gameplay, you’ll see a symbol of a rocket ship come into view on the first reel only. This operates as the slot’s expanding wild addition. Basically, it will appear in only a single position initially, counting as all other basic symbols in Goldenman. This helps you with creating winning combinations.

If additional wins can be formed on other lines and rows, then the wild will expand across the entirety of the reel to provide pay-outs for such. This symbol is also added to reels two and three during free spins. 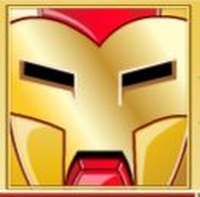 The close up of Goldenman’s face is the symbol that will operate as this game’s jackpot addition.

This means that you can gain huge pay-outs from it appearing in three locations or more. Spin five of them into view and you’ll be the recipient of 500x your in-play stake.

The last symbol to be aware of in this game is the shot of Goldeman holding his hand up as if ready to strike down an enemy. This one is able to activate the slot’s free spins function.

Three or more of them need to appear in scattered locations to be able to trigger 15 free spins altogether. During this round, all of the winning combinations that you form will receive a multiplier of 2x for your pay-out. 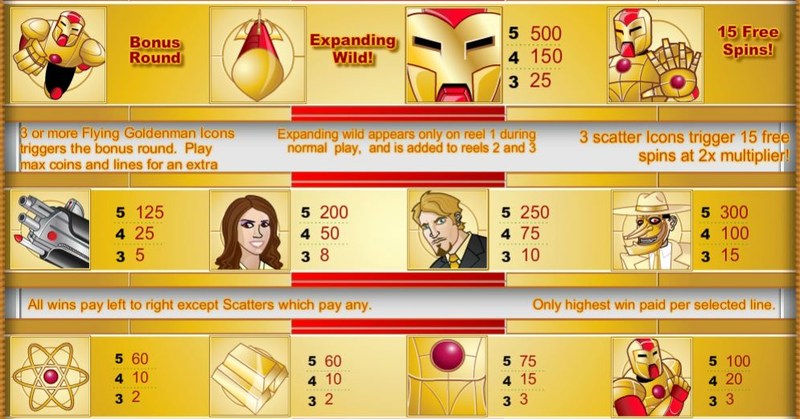 While the similarity between Goldeman and Iron Man are blatantly obvious, Rival has given this game a bit of its own identity, too. With the inclusion of free spins, a bonus round, and an expanding wild, the game does provide its own level of entertainment to players. As well as this, Rival Gaming has added some comic book style graphics to the game, so it’s both visually appealing and provides exciting gameplay.