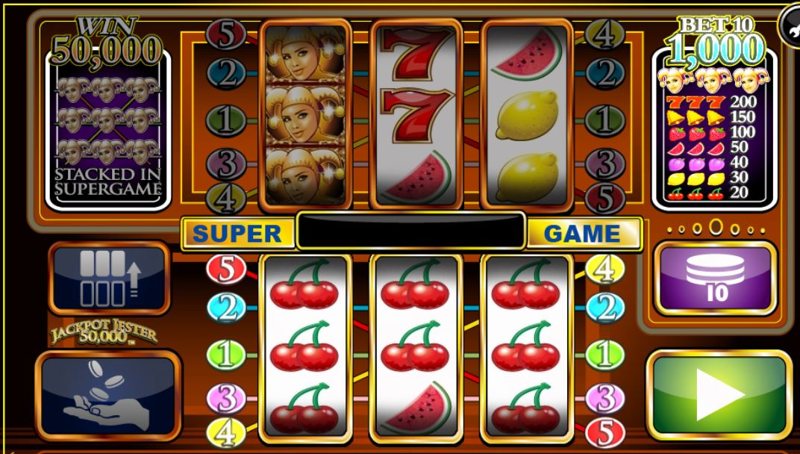 Jackpot Jester 50000 aims to deliver players that old school feel with this seemingly classic setup. The game is actually on a real slot machine in the middle of a casino, and you can see two rows of other slot machines on either side of it. You have two different sets of reels, one above the other, and the paytables are just beside the reels on the screen, as tradition would dictate. You might also notice that there are three different paytables, each one for a different stake. This is actually essential to gameplay and we’ll get to that in just a bit. Meanwhile, we should point out that the graphics are of a decent quality, although of course the genre and this particular setting don’t allow for any kind of flashiness, and that’s perfectly fine.

As for the symbols, for the most part these are all just your regular fruit machine icons. These include cherries, lemons, plums, watermelons and strawberries, and then you have the higher value symbols which are the golden bells and red lucky 7s. The Jester is the most lucrative icon of the bunch. Onto the setup, as we mentioned there are two reel sets; both are identical in that they each have 3 reels and 3 rows, and both also have 5 active paylines each. Obviously, you won’t have the luxury of regulating the paylines in this title, so stakes start at a minimum of 10p per spin spanning up to a total of £50 per single spin.

In true classic slot machine spirit, Jackpot Jester 50000 doesn’t come with any bonus games. In other words, there are no freespins, no pick-me games and not even a respin feature. What this title does have, though, is the Super Game feature. When you are playing the base game, you will only be playing on the bottom set of the two reels, and if you’re playing with lower stakes, then that it all you will get from gameplay here.

However, if you choose to play with 20 coins or higher, then any win you land on that set of reels will be transferred to the Super Game Bank. At some point you will have enough credits accumulated there to choose to spin the top reels. If you don’t want to, you can just collect your wins from there instead.

The perks of the top set of reels, though, is that you get to benefit from much higher payouts, although of course there’s also the risk of losing all those winnings you worked so hard to earn.

There is one special symbol in this NextGen Gaming offering and that is the Jester icon. It acts as a Wild symbol, as well as the most lucrative one on the reels. And as such it will be able to replace any of the other symbols present – no exceptions.

Jackpot Jester 50000 will be a joy to play if you have a big enough bankroll and like retro slot machines. Unless you check both of those boxes, though, this game will most likely come across as boring.