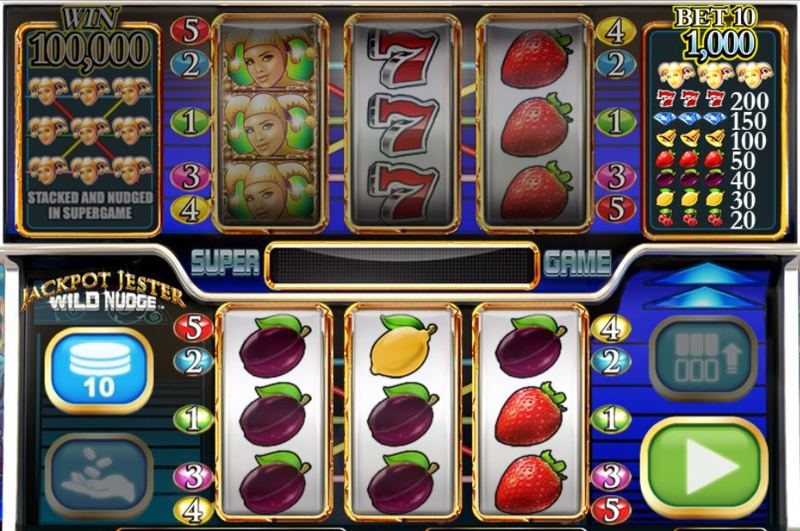 Jackpot Jester Wild Nudge is a sequel to another classic themed online slot game by software manufacturer NextGen Gaming. It is, however, a noticeable improvement on the original. For one, it takes you underwater and there is, therefore, more to look at in the backdrop. You have the soothing scene of the bottom of the ocean, with giant clams, corals and other colorful and diverse sea life. There’s a fairly decent soundtrack playing in the background too, and it switches to an even more dynamic one when you change playing mode. We will explain what we mean by that further on in this review. As far as the game’s setup goes, though, things are very similar to Jackpot Jester 50000.

You still have your two reel sets stacked one on top of the other. And both of the reel sets have a pretty basic retro layout. They each have 3 reels with 3 rows, and each of the sets also boasts 5 active paylines. The paylines are fixed, too, so there isn’t the possibility to regulate them. What you will have, though, is the ability to switch between three different coin values throughout gameplay. Yes, not too flexible, but there’s a purpose to that, too. Thus, your minimum bet is a total of 10p per spin, and the maximum amount you will be able to wager here will set you back £50 per spin.

Similarly to the other title in this series, Jackpot Jester Wild Nudge doesn’t exactly boast any conventional bonus rounds- so no free spins or respins and not even a pick-me game for you to benefit from. Instead, what it has is a Super Game, which you can take advantage of throughout gameplay for some pretty dramatic potential wins.

As we pointed out, there are two sets of reels. During the regular base game, you play on the bottom set of reels which has two coin values: 10 and 20. The 10 coin game won’t give you any extras, so it’s just your regular old school slot machine; but if you choose to stake 20 coins per spin, then you can gain access to the Super Game.

What does this mean? This means that during the base game, every win will accumulate in the Super Game Bank. And then once you have reached the minimum of 100 coins, you can choose to play on the top set of reels. There, the payouts are much larger and you can even hit the jackpot of a whopping 100,000 coins. Alternatively, you can just collect those wins at any point during the game and pass up on that opportunity.

As the title would suggest, this game has a Wild symbol. It’s the Jester, which is also the most lucrative icon in sight, and it can land in any position, anywhere on the reels. More importantly, it will be able to substitute for any of the other symbols to help complete winning combos.

In addition to that, the Wild also participates in the Wild Nudge Feature, and that it something the previous game in this series didn’t have. Basically what it means is that any time a Wild lands in the Super Game it will be nudged until there are Wilds covering that entire reel. As you can imagine, this can make for some pretty attractive prizes, not to mention that it makes covering the screen in Wilds (which is how you land the jackpot) much easier. It will essentially be enough to just land at least one Wild on each of the 3 reels.

Jackpot Jester Wild Nudge is certainly a much more captivating offering than the original. The Wild Nudge Feature is really what makes the game and promises handsome winnings.