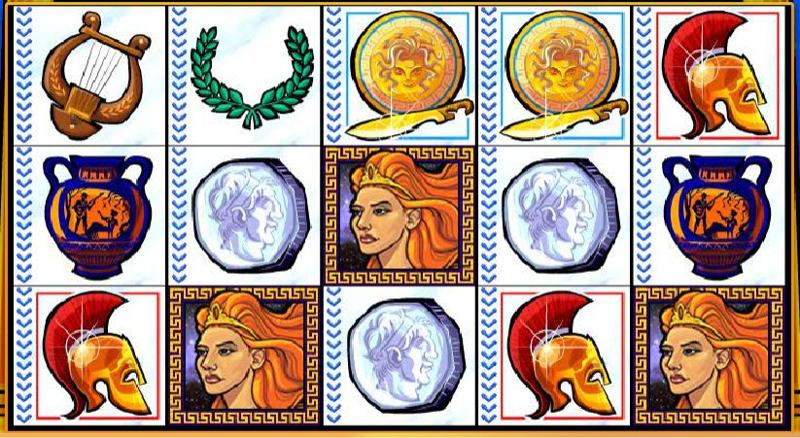 Kingdom of the Titans takes Rome and the Roman Empire as its theme, featuring all of the related imagery. You have symbols of Caesar, Roman shields, swords, helmets and armor, as well as coins and even a laurel wreath. This title is by software manufacturer WMS and it is clearly not one of its latest releases – the graphics are dreadful. Cartoonish in style and lacking any kind of sharpness or definition, and you can forget about animations of any sorts. There’s a triumphant backing track that you can hear as the reels spin, but once they stop so does the soundtrack – and very abruptly, too.

This brings us to the game’s layout. It features a grid of 5 reels by 3 rows and a total number of 30 active paylines. The paylines are not subject to adjustment in Kingdom of the Titans, meaning they are fixed, and this also reflects accordingly onto the available betting range. Stakes start off at a minimum bet of 30p per single spin, and they soar up to a maximum of £150 per spin. Keep in mind, though that there is a fairly attractive jackpot of 1,500 coins.

What basically makes the game worthwhile in Kingdom of the Titans is the Spinning Streak feature. The beauty of this engine is that whenever you land a winning combination, the symbols forming it will remain on the reels while the others re-spin. If more of those symbols land as a result of the re-spin, this will trigger a subsequent re-spin. The reels will essentially stop spinning when no more of those symbols appear on them. Hence, you will have the chance of gaining a larger cash prize from the same spin. 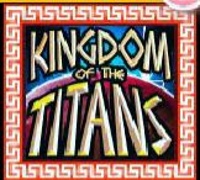 The logo symbol of Kingdom of the Titans is Wild and can replace any of the other symbols on the reels. The one exception is the Feature symbol, which the Wild won’t be able to substitute for. In addition, the Wild doesn’t just appear anywhere either. It can only land on reels 1, 3 and 5, so be sure to keep an eye out for it. 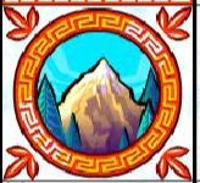 To trigger the Freespins feature you will need to land all 5 Feature symbols simultaneously during a spin. This will award you a random number of free spins anywhere from 8 to a whopping 50. In addition, you will also benefit from a random multiplier from 2x to 10x, and all wins from the free spins round will be subject to that multiplier. 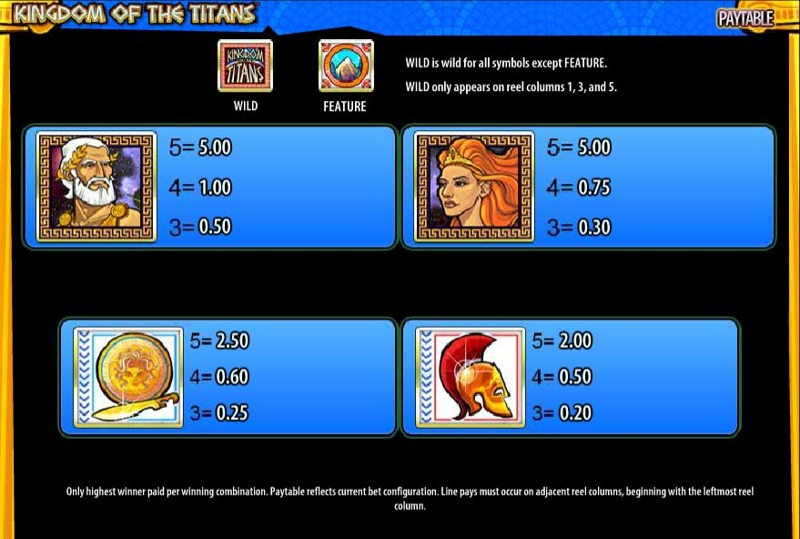 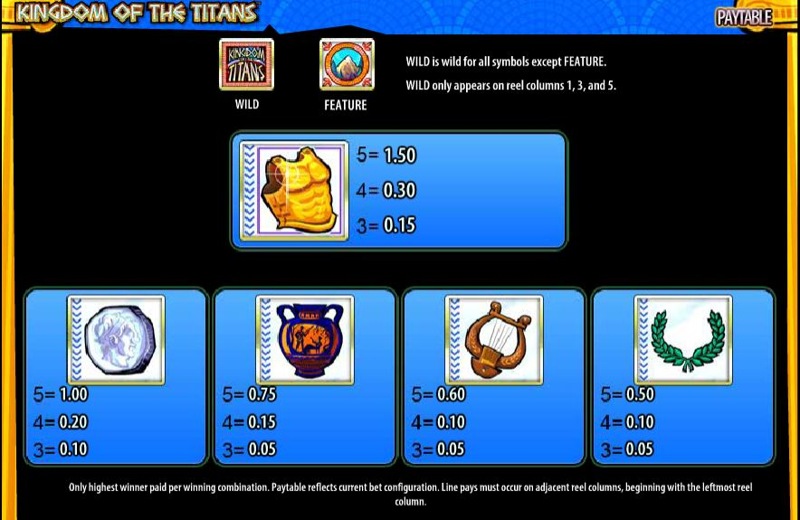 Terrible graphics aside, Kingdom of the Titans is nevertheless potentially very rewarding, and that’s probably what matters most at the end of the day. It’s medium variance, but if you land a higher multiplier and get more free spins the payouts can be huge. So all in all, it might be worth giving a try if you can get over the visuals.