With this game, it is best to think less about the Major, because the military element is just a small part of the theme, with the real focus on the millions. This is because there is an awful lot of money at stake in this game, which has a progressive element. Players know that the odds of triumphing in a progressive slots game are limited, but with such a high prize on offer it is easy to be tempted to play for a major return.

Major Millions is produced by Microgaming and it is a 5 reel and 15 paylines game. There is an additional 3 reel version of the game which works alongside the 5 reel game in creating the progressive jackpot. Unsurprisingly, most of the focus falls upon the progressive element and there is no free spin feature to look out for.

The fact that Major Millions was the first online slot game to pay out over $1m in a progressive game means that it will always have a reputation and image that people recognise. The lack of free spins or bonus rounds may see some players bemoaning the options on offer with Major Millions but in all honesty, the majority are more than satisfied with what is on offer.

The Major Millions symbol is the wild symbol in the game. This means that it will substitute for any other symbol in the game, but it also means that if you have a Major Millions symbol on screen alongside having a winning combination, you get your hands on a big multiplier. This is a three times multiplier so you have a genuine chance to boost all of your winnings when you manage to collect this symbol. 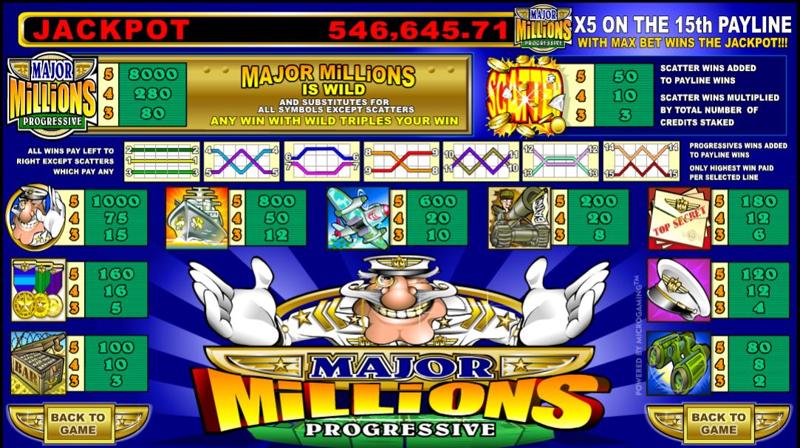 The great thing about Major Millions is that you know exactly what you are getting from the game. There is no real bonus round attached, no free spins to keep you entertained; what you do get is a game that leaves players pursuing a massive cash prize. There is absolutely nothing wrong with this and it brings a lot drama and tension with it. Major Millions is definitely a game that provides players with an ideal opportunity to play slots for a life changing sum of money.