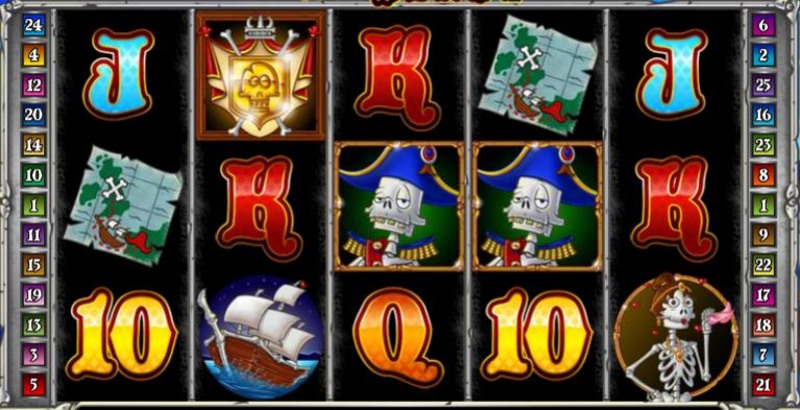 If Napoleon were around right now… he’d probably be a skeleton. At least that’s what this online slot game by software provider NextGen Gaming will have us believe. Obviously, this is a comical offering that uses a funny play on words for its title, and there really are a lot of boney parts in this slot. In fact, the backdrop is littered with human skulls and bones – some of them even still wearing their hats – and there are two full sets of skeletons on either side of the reels, both still wearing their uniforms and carrying their muskets. The graphics here are fittingly cartoonish, but there’s certainly nothing fancy about them. There are some simple animations here and there too, and a very ‘boney’ soundtrack to go along with them.

This brings us to the technical aspects of Napoleon Boney Parts. The slot features a layout of 5 reels and 3 rows, and these come with a total number of 25 active paylines. However, the paylines are not fixed, so you will have plenty of flexibility with the betting range. Speaking of which, it’s a pretty large one. The minimum bet is a comfortable 1p per single spin and the maximum amount you will be able to wager on these reels is a total of £500 per spin. 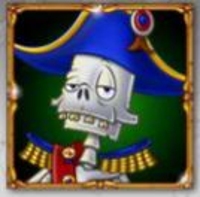 Napoleon (or his skeleton at least) acts as the game’s Wild symbol. He has the capacity to substitute for any of the other symbols on these reels, and in doing so, the Wild will be able to help boost your winnings by completing combinations. However, keep in mind that the Wild can only appear on reels 2, 3 and 4. In addition, it doesn’t quite offer any payouts of its own and it will also not be able to replace the game’s Scatter icon. 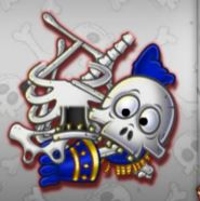 Besides everything that we already mentioned about Napoleon, he also has his very own feature, and you can trigger it by landing all three Wild symbols on the reels at the same time. This will result in a different kind of pick me game, where the objects are Napoleon’s bones. You will get three picks and your aim will be to get his skeleton to collapse. If you do manage this, the game will reward you with a very impressive prize. 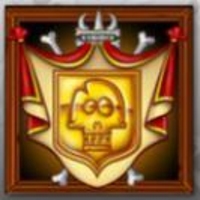 The only other special feature on offer in Napoleon Boney Parts is the Freespins Bonus. This you will be able to activate with the help of the game’s Scatter symbol. Unlike the Wild, the Scatter can actually land in any position, anywhere on the five reels., and you will need to land at least 3 Scatter symbols all at the same time in order to trigger the feature. As a result, you will receive 10 free spins with a 2x multiplier that applies to all of the winnings throughout the feature. You can even retrigger the feature and earn another 10 free spins. Just land another 3, 4 or 5 Scatter symbols simultaneously and enjoy a grand total of 20 free spins. 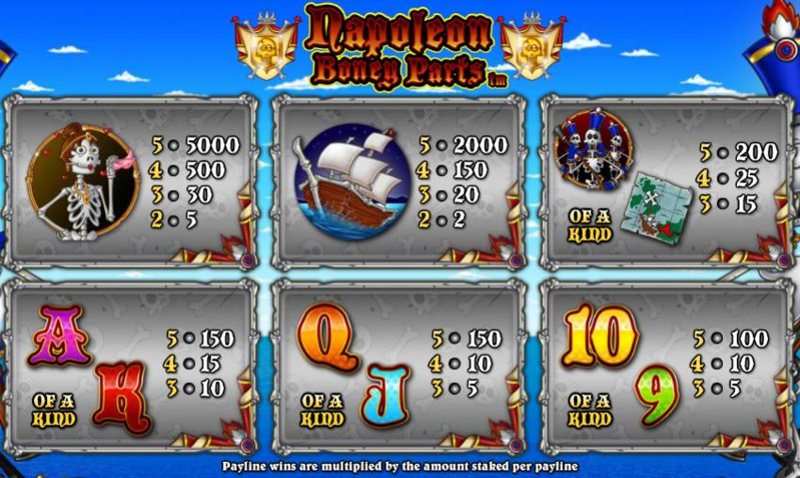 Napoleon Boney Parts is certainly as amusing a slot game as they come. How exactly the developers came up with the theme is beyond us, but it’s certainly great fun; and the Boney Parts feature has to be the most creative and possibly also the most lucrative.