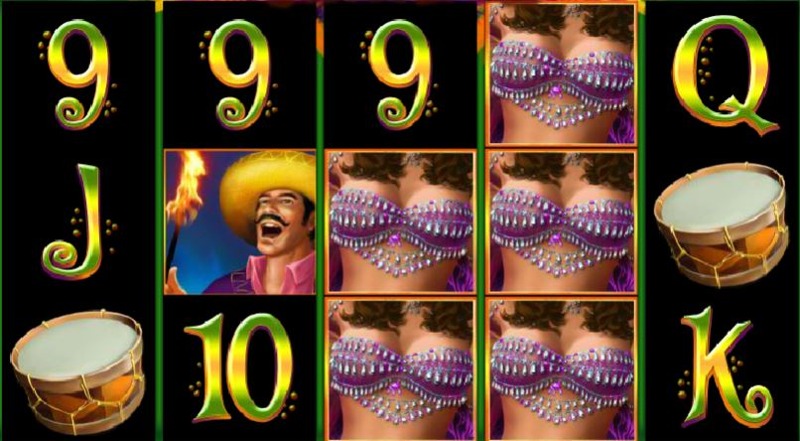 It’s never too late to join in Brazil’s iconic carnival – even if it’s in the middle of autumn and you’re at home covered with a blanket. Samba Brazil by online slot game developer Playtech will provide you with the opportunity and has everything to make you feel like you have really come to the Brazilian carnival. It has bright colors, hot dances, flamboyant costumes, and even its own theme song. Now, the graphics may not be the last word in technology, but this slot has been around for a few years now to be fair. It does have a few entertaining animated features that make for an even more lively gaming experience, though, and as for the symbols, these feature the lower value playing card icons from A to 9. The mid and higher value ones, on the other hand, include maracas, a drum, and parts of a sexy dancer.

The layout in Samba Brazil features your regular grid of 5 reels and 3 rows. In addition, there are up to 25 active paylines for you to bet on. Or in other words, you will have the possibility to set them to a number that suits your preferences. This makes for an incredibly liberal betting range; the minimum bet is only 1p per single spin, making it accessible for penny players, and the maximum bet is £250 per spin making this a good slot for high rollers, as well.

Samba Brazil has an interesting concept in Mixed Pays. We pointed out that some of the symbols picture body parts of the dancer, and while you will of course get payouts for lining up matching symbols on a payline, you can still get cash prizes for landing mixed combos. For example, getting two mixed symbols will award you 8x your line bet; 3 or 4 mixed symbols will get you 30x and 150x your line bet, respectively; and a sequence of 5 mixed symbols on a payline will give you 750 times your line bet. The only other requirement is that the combination begins from the leftmost reel.

This offering doesn’t come with a Wild symbol per se. Instead, the female dancer’s body parts come into play again. If you can get one of them stacked on reel 2, 3 and/or 4, they will all merge to form the dancer; and while she will perform her signature samba moves she will also act as an Expanding Wild.

Hence, she will be able to substitute for any of the other icons on the reels bar the Scatter, and thus, you can count on the Wild boosting your wins by helping complete winning sequences. 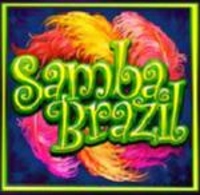 The main attraction of Samba Brazil is the Samba Music Bonus Feature, and you will be able to trigger it with the help of the game’s Scatter symbol. More precisely, you will have to land at least 3 of these symbols at the same time in order for the bonus to commence. When it does, you will enter a new screen that will present you with a selection of maracas.

The maracas in question can reveal cash prizes, freespins, and multipliers for the freespins. Select five of the 12 objects on display to collect your prizes, and after that the freespins will begin. What’s more, you can even retrigger the feature an infinite number of times by landing another 3 or more Scatters simultaneously, giving you an extra 10 freespins. 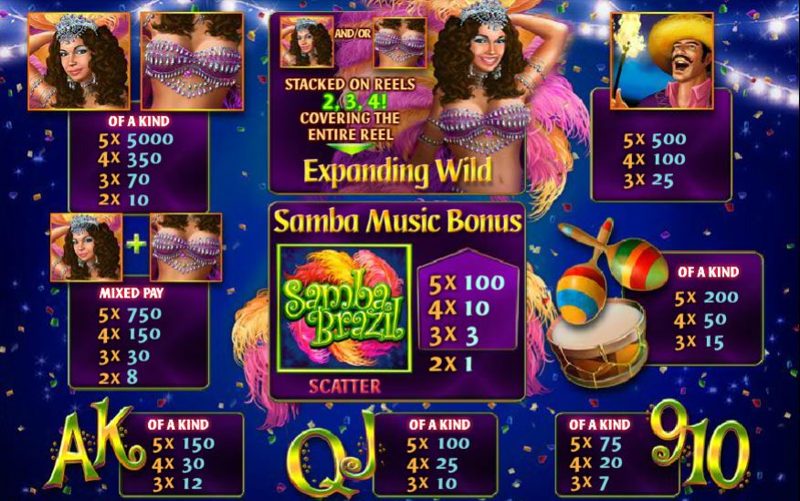 Samba Brazil will certainly help to put you in a better mood than you were in before you started playing. It’s so vibrant and it has such a great vibe to it that it would be unwise to pass by. In addition, gameplay is very smooth and there are some unusual but cool features to enjoy, too.