Classic slot games may not be everyone’s cup of tea, but you might change your mind on that once you spin the reels of Sevens & Stripes. This slot offering brings forth the traditional symbols that one associates with classic slots, and it gives it a little bit of an American twist as well.

How so? Well, just take a look at the shot of the US flag on display in the background of the reels. The flag itself is often referred to as Stars & Stripes, which is where this game takes its name from, as the stars are replaced by 7s. It’s not a masterclass in graphic work, but it does the job.

A single payline is in action across the 3 reels of the game, running straight through the middle. You obviously can’t adjust the number of active paylines in this slot, but you have the potential to alter the bet that you place on such. First of all, you can choose a coin value between 5p and £5. Then, you have the option of using between one and three of those coins per spin. So, the maximum overall wager in this slot is £15 per spin.

Sevens & Stripes does not really include any kind of special features. This isn’t out of the ordinary for classic slot games, though.

One thing to make you aware of is that there are three colours of the number 7 symbol and the same with the BAR symbol. You’re able to form a win from one of each of these colours showing on the payline after a spin, with the 7s paying out the most. This means that with three of the coins in operation, you could receive up to £10,000 from a red, white and blue 7 appearing in a winning combination. 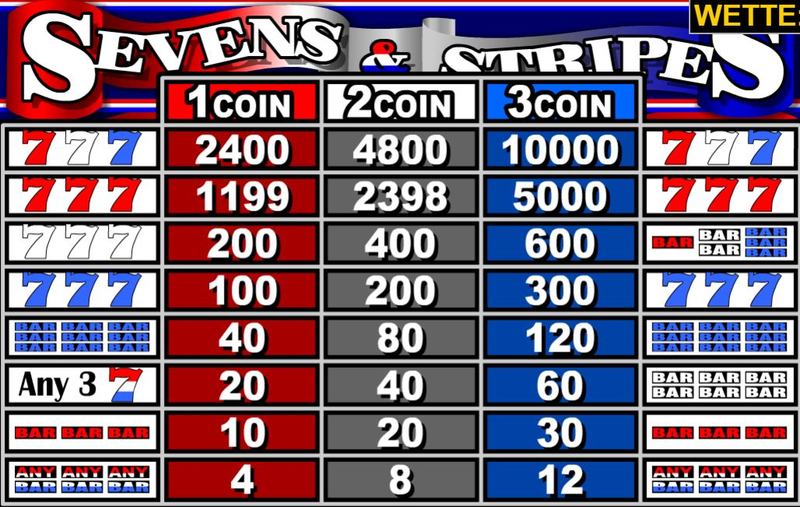 There’s little more that can be said about this RTG slot game. It’s a classic slot through and through. So, if you like to keep things simple, then it will most likely appeal to you. Fans of games with inbuilt special features, however, will struggle to keep their attention on this very basic offering. It’s retro and it’s entry level stuff really.