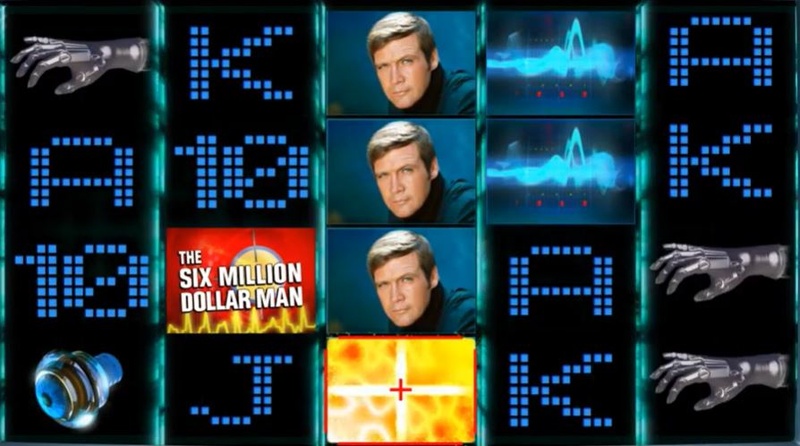 The Six Million Dollar Man slot will probably sound like a familiar title to you if you’ve watched the fairly popular television series of the same name. In fact, the game is fully based on that series. So, if you’ve enjoyed the series in the past, then this offering will be sure to put a smile on your face.

In addition, it’s brought to you by software developing giant Playtech, so the quality will not disappoint. Just don’t expect flashy visuals with fancy 3D animations and such. On the contrary, the developers have tried to keep the game in the same style as the TV show. And since it was on the air in the 70s, the visuals are of matching appearance. So, you have the pixelated electronic digits (lower value playing cards), for example; and then there’s the really old-school control panel with bulky square buttons and switches, and two massive levers to pull for the spins.

As far as the layout in this title goes, it features a slightly taller grid than what’s considered the norm. Namely, there are 5 reels and 4 rows, instead of the far more common 3. And these come with a total of 50 active paylines. The paylines will not be subject to adjustments, though, meaning they are fixed. And with that in mind, you will find that stakes here are rather expensive, starting at a minimum bet of 50p per spin. The maximum bet will set you back a whopping £250 per single spin.

As we mentioned, there are two levers in this game. One you will need to make a regular spin of the reels happen. And then the other is for the so-called Bionic Spin. This is an extra feature that will offer you additional winning opportunities or better odds in exchange for a little higher stake. Namely, if you go for the Bionic Spin lever, you will have to cough up an extra 50% of your stake. This will ensure that you receive 1 to 5 random Wilds for that spin anywhere on the reels. 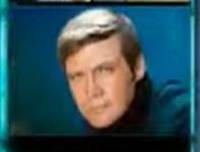 The main character of the series acts as the game’s Wild symbol. And he will be able to land in any position, anywhere on the five reels. In addition to that, the Wild will also be able to replace any of the existing symbols on the reels, with the only exception of the game’s Scatter. And in doing so, it can help contribute to your wins by completing winning sequences. What’s more, the Wild is also the game’s most lucrative icon. So with its help you can potentially pocket up to a hefty 4,000 coins.

Now we reach the main special feature in The Six Million Dollar Man – the Bionic Freespins Bonus. You can trigger it by landing at least 3 of the Scatter symbols in any position on the reels. And this will, in turn, reward you with a total of 15 freespins.

During these freespins, you will also have to collect the bionic part symbols (foot, hand and eye – in that specific order). You can only collect a single symbol per spin, though. And once you have collected them, you will receive an extra 2 freespins and an additional Wild. Then the progress bar will reset and you can start collecting the symbols again. Note, however, that you won’t be able to retrigger the feature the same way you triggered it. And the Bionic Spin option will also not be available throughout the duration of the bonus game. 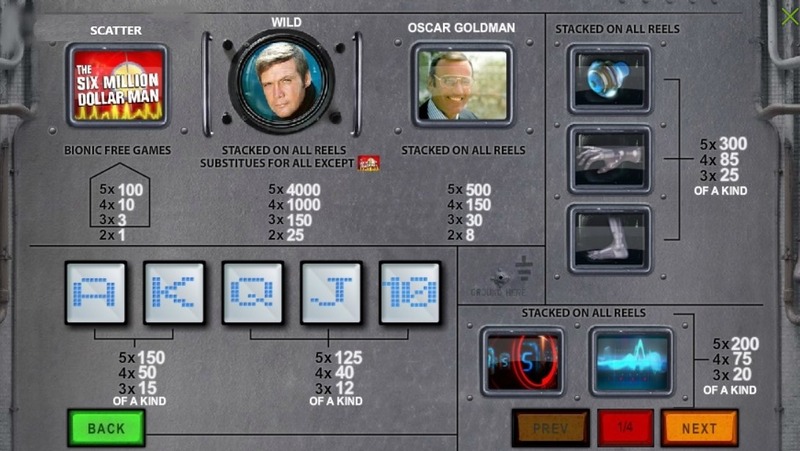 The Six Million Dollar Man is an awesomely nostalgic offering, but a very fun one as well. However, with that in mind, we should also point out that this game can be pretty devastating to your bankroll, so tread lightly.