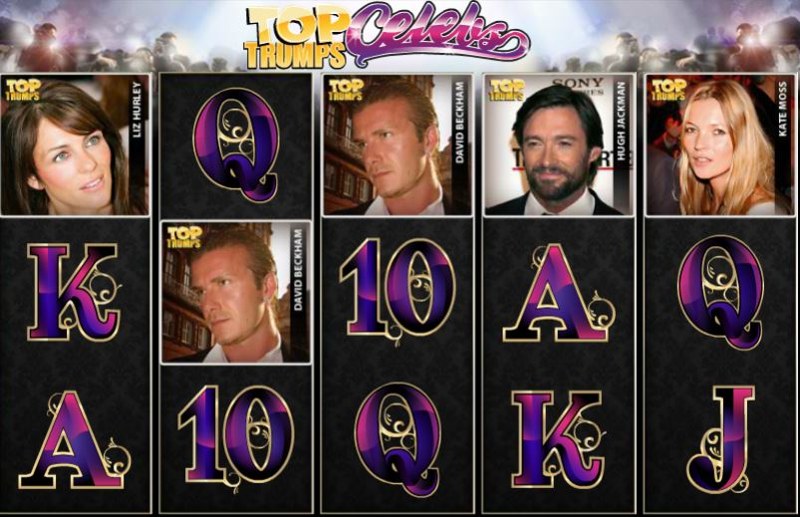 Celebrities are the hottest thing around these days, with many people following their every movement. But who is your favourite celebrity? Maybe you like the acting work of Kevin Costner or Sean Connery. Or perhaps you have a preference for singers like Beyoncé or Christina Aguilera. Whatever the case may be, this Playtech offering allows you to see them all appear on the reels and in fact, you get the chance to decide which celebrities show up as icons, with multiple options being available to you. There’s a funky soundtrack that plays and in the background is a throng of photographers just waiting to take the stars’ photos. The standard, lower-paying icons of the game are available in the form of 10, J, Q, K, and A. The next five symbols coming into view on the reels are of your chosen five celebrities. Along with the stars mentioned above, you’ll be able to select from people like Mariah Carey, Liz Hurley, 50 Cent, Paris Hilton, P Diddy, Leonardo Di Caprio, Tom Cruise and Will Smith.

The slot features a layout consisting of five reels and three rows altogether. Alongside this, there are a total of 20 pay lines in action across the reels, although you do have the ability to customise these easily – just use the ‘Lines’ button that can be found at the bottom of the reels. Additionally, you have the ability to change your bet amount. The coin value of the game is set at £0.01, but if you use the ‘Bet Per Line’ button you can alter the overall value. This means you can choose amounts between one and 10 coins per line, making the maximum overall wager in Top Trumps: Celebs stand at £2 per spin.

This slot game contains a nice collection of extras, although one of them is a special feature that you’re able to trigger yourself. After every win that you form during the base game you can click on the ‘Gamble’ button. Using this will allow you to play a mini side game where you need to guess the colour of the next playing card turned over. Getting this right will double your winnings from the triggering round, whereas an incorrect guess sees those funds lost. 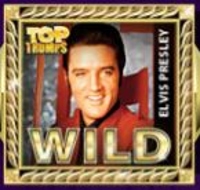 Top Trumps: Celebs contains its own wild icon, and is another icon that you can choose the celebrity for, including options like Elvis Presley, Madonna, Brad Pitt and Johnny Depp. If a wild symbol comes into view on the reels it will substitute for all other symbols, helping you to create winning combinations.

The only icons it won’t substitute for are the scatter and bonus additions. If five wilds come into view on a winning pay line you will receive a bet multiplier of 10,000 times. 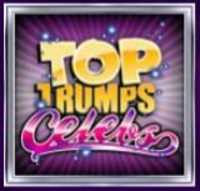 The game’s own logo works as the scatter symbol in this slot. As such, it can show up in any location on the reels and still reward you with a pay-out. Yet, if three or more of them come into view you will trigger the slot’s freespins round.

You’ll be given 10 of these to use and the round will feature extra wild symbols on the reels too. Whenever a wild substitutes in a winning combination in this round, it will quadruple your pay-out. 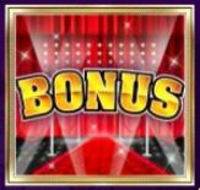 The bonus icon is present in the form of the red carpet image. This one needs to show up on reels one and five at the same time in order to activate the Red Carpet Bonus Feature. This presents you with a wall of 16 different celebrities, each of which has a hidden prize underneath. Simply click on these images to reveal three prizes.

One of the celebs may reveal an ‘Extra Pick’ option, too. 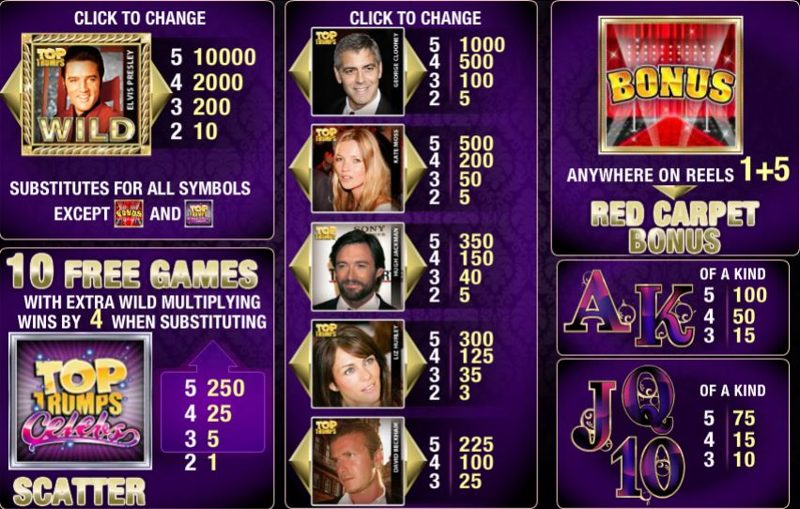 On the whole, we think that this Playtech slot is a very nice addition to the developer’s catalogue of games. It has a set of high-quality graphics on display, whilst also providing entertainment through various special features, too. Overall, it’s a highly recommended video slot to play.