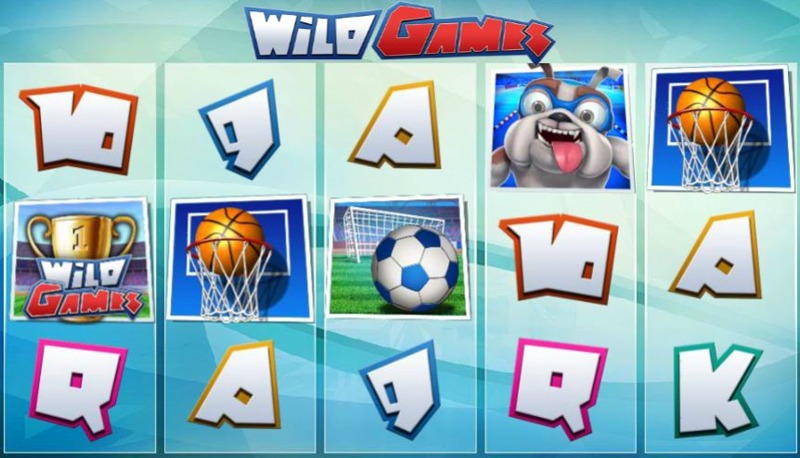 A gymnastic hippopotamus, a swimming bulldog and a sprinting cheetah all attend the Olympic Games…it sounds like the starting line to a joke but trust us, there’s nothing jokey about the Wild Games slot from Playtech. This one will have you wishing that you were a part of the athletics team this year, too, and a big part of that is due to the fact that Playtech includes a selection of high-quality graphics. While we would have liked to have seen a bit more of a thematic background on display, Wild Games has nothing more than blue-toned backdrop. This doesn’t really detract from the slot though and you’ll still have an entertaining time while spinning its reels. The symbols that appear begin with the standard playing card additions we are used to seeing, and joining these are symbols of a basketball, a football, the three animals, bronze, silver, and gold medals, and a golden trophy.

The setup provides players with a five reel and three row layout. At the same time, the game incorporates a selection of 25 pay lines, although you do have the option of customising these to suit your own preferences. Additionally, you have the ability to change around your wager in the game, too. Simply use the relevant plus and minus buttons at the bottom of the reels. There, you have the chance to select from a minimum bet per line of £0.01, right up to £10. This means that you get the option of placing a maximum overall bet of £250 per spin.

We would always hope that a game basing itself on the Olympics would also feature some special additions. Fortunately, Wild Games does have a nice choice of these that you can benefit from. These all work together to enhance the slot and your overall enjoyment of it. 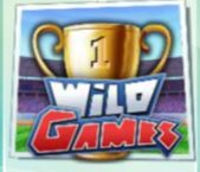 Looking at the game, you’ll get to see that the reels contain a symbol of a golden trophy with the game’s logo written over it. This wild symbol works as a substitute for all other icons upon the reels, helping you to form winning combinations. The only exceptions to this rule are the three medal symbols.

Additionally, it is this symbol that is able to provide you with the highest pay-out in the main game. Five of them on a winning bet line will reward you with up to 3,000 times your stake. 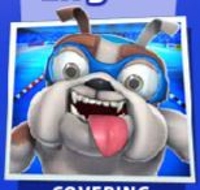 If you see the symbol of the swimming bulldog cover the entirety of the third reel, this will activate the Freestyle Swim Bonus round. This requires you to choose one of three bulldogs to compete in the swimming event. First, second, or third place wins you a gold, silver, or bronze medal, and eight freespins afterwards. During the freespins round, the medal won during the competition is the only one that appears on the reels. 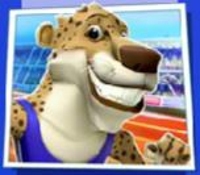 If the cheetah covers the third reel, this round will begin. Simply select one of three cheetahs to compete in the 100m dash race and again, finishing in first, second or third place will win you a respective medal and eight freespins. During this round, the medal that you won in the race is the only one appearing on the reels. 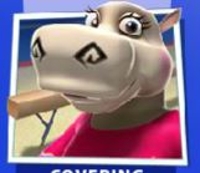 If you trigger this round by the hippo appearing entirely on the third reel, you need to choose one of three balance beam routines. The judges will then rate your performance and you receive eight freespins. The freespins round will be played with a multiplier that equates to the average of the judges’ scores.

Finally, if three or more medals of the same kind appear anywhere during the main game, you will activate the Win a Medal bonus round. Simply choose one of the medals that triggered the feature for a cash prize. 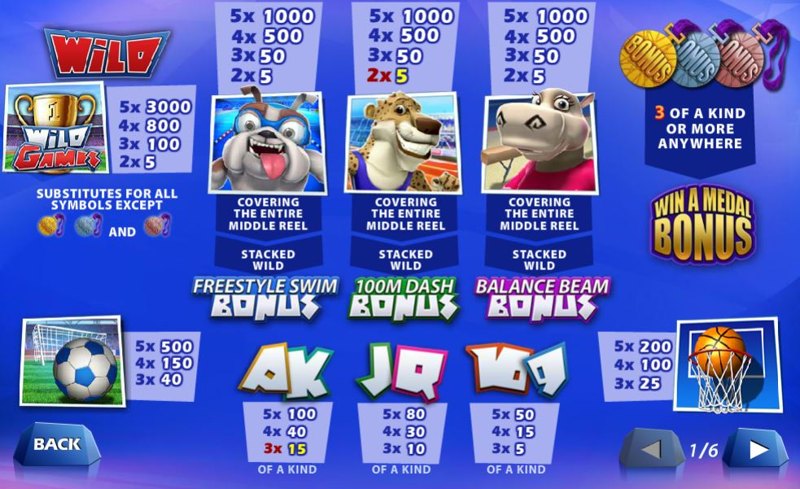 If we were to pick only one Playtech game with intriguing features, high-quality graphics and an overall entertaining theme, then Wild Games would be the one. It’s enjoyable right to the core.