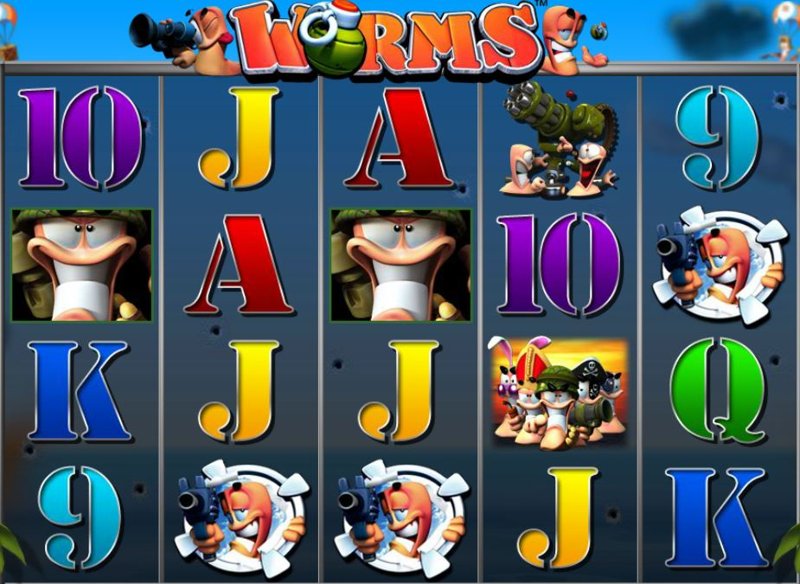 Computer gamers of days gone by will no doubt remember the strangely addictive game known as Worms. The game where you took control of a squad of tooled up worms and had to try and destroy those on the other team with a variety of whacky attacks such as air raids, bazookas, exploding sheep, and the ever popular kamikaze method! Well, the more recent 3D version of the console game has been recreated as a slot game, bringing you just as much excitement and mad cap fun. Reels in the game feature A, J, K, Q, 9 and 10 symbols, as well as various icons of the Worms characters getting up to no good.

You’ll find five reels and four rows make up the main games layout, while a total of 50 non-customisable paylines are also present. The total bet placed begins at £0.50 and can be increased through various amounts up to a maximum of £250 per spin. If you use the autoplay button you can set the reels spinning for 10, 20, 30, 40 or 50 times consecutively. 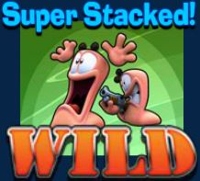 The game features super stacked wilds, represented by a worm about to get its head blown off. These will stand in for any other symbol, except bonus/scatter symbols, to create a winning combination on the reels.

Should the entire reels be filled with stacked wilds, you’ll receive a huge payout of £12,500. 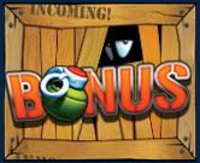 Spinning three bonus scatter symbols on reels two, three and four will award you with the Worms Bonus feature. This will give you the chance to select one of the three crates that the bonus symbol is represented by, and you’ll be taken to one of the three bonus games covered below.

Revealing the Sgt. Major worm in one of the crates will trigger the unlimited freespins bonus round. This will also see a battle occur between the worm characters. If the Sergeant Major appears on the middle reel you’ll be granted a bonus cash prize on top of the freespins wins; the pirate worm appearing on the middle reel will reduce your health meter, while a medic worm will increase it.

This round continues until your health meter falls to zero.

Revealing the Cosmo Worm in one of the crates will trigger the Space Trail bonus game, presenting you with a trail of multipliers. You’ll need to choose a toolbox from the side of the screen to reveal a pickup.

Revealing an advance symbol will propel you along the trail, increasing the multiplier as you go. Revealing a weapon will trigger an attack on your worm. If he gets hit, the bonus game ends.

Revealing the patriotically kilt wearing Scottish worm will see you brought face to face with him. He’ll be surrounded by crates and it’s your job to select the ones that will bring the biggest payouts.

Revealing a cash prize in a crate will reward you with that amount. Revealing a weapon will deplete the Scottish Worm’s health, while a first aid kit will replenish it. The round ends when the worm’s health is totally depleted. 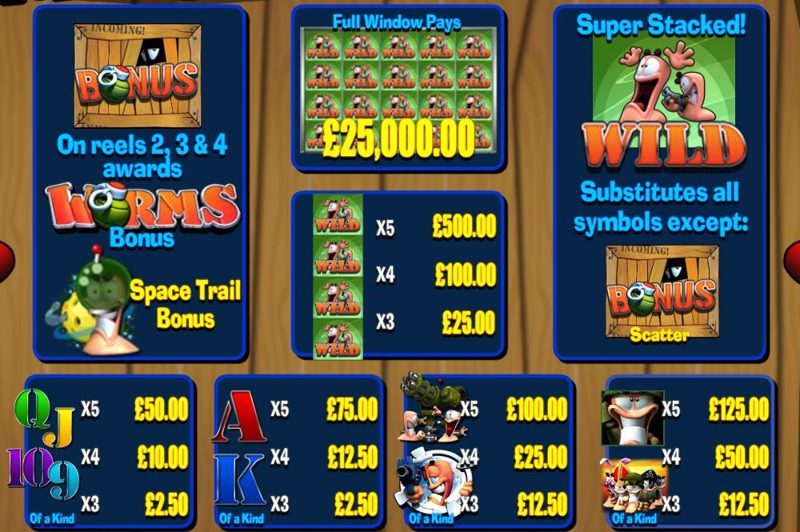 Worms is a great game that integrates super bonus games and imagery of the console game, as well as some aspects of the original gameplay we know and love.