Inspired by the now legendary Popcap game which sees players firing coloured balls out of a frog’s mouth into a stream of others in order to blow them up, the Zuma slot game builds on such a theme to create a compelling product to play. Featuring symbols of the central frog as well as one or two other animalistic-looking characters, every spin of the reels will present you with an almost tribal sounding piece of music. There’s also standard A, J, K, Q, 9 and 10 symbols included, and one or two extra features to make gameplay more interesting.

A total of 20 paylines are able to be wagered on in this game, which can be customised should you find yourself wishing to gamble on less. The stake per line can be changed from the minimum of £0.01 up to the maximum of £5.00 per line, thus allowing a maximum overall wager of £100 to be placed.

Following each winning spin, you’ll have the option of gambling the win. This will present you with four separate reels, one allowing a multiplier of two times your winnings, one with four times, one with five times and the last with 10 times. You should select how much you’d like to gamble up to by pressing the gamble button at the bottom of your chosen reel. This will set the reel spinning and if it lands on the multiplier symbol, your winnings are multiplied, but you can of course lose your winnings too. You then have the option to collect, or gamble again.

The Zuma logo represents this game’s wild symbol and will substitute for all other symbols on the reels, except the frog. The wild can also multiply winnings up to ten times. 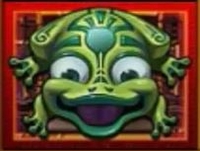 Three or more frog scatter symbols appearing anywhere in view awards you with freespins. You’ll firstly be taken to a screen presenting you with four tiki bosses. You need to shoot one of these with the frog to receive your freespins, with each rewarding a different amount.

Freespins are then triggered automatically at the same number of lines and the same wager as that which triggered the round. After the freespins round has ended, you’ll need to shoot another tiki boss to receive your multiplier. This will then, of course, multiply your freespin wins by the amount shown. 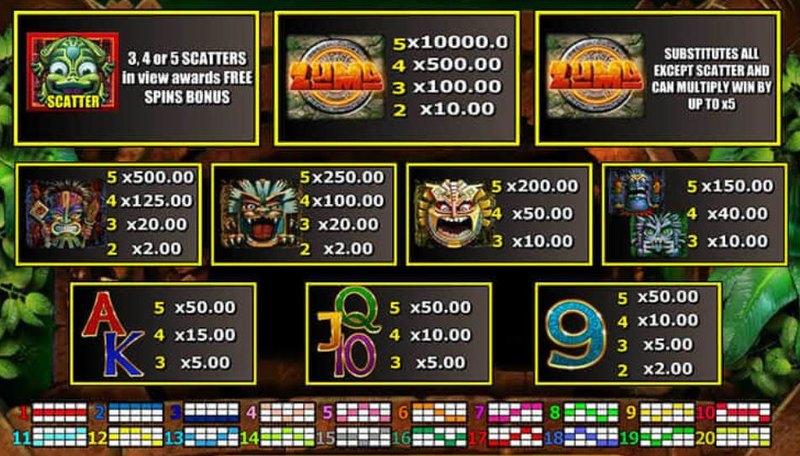 Zuma does provide a thrilling game to play, especially if you’ve ever played the Popcap original game. The freespins feature, complete with its shoot the tiki boss multiplier is a great addition and makes it all the more compelling to play.