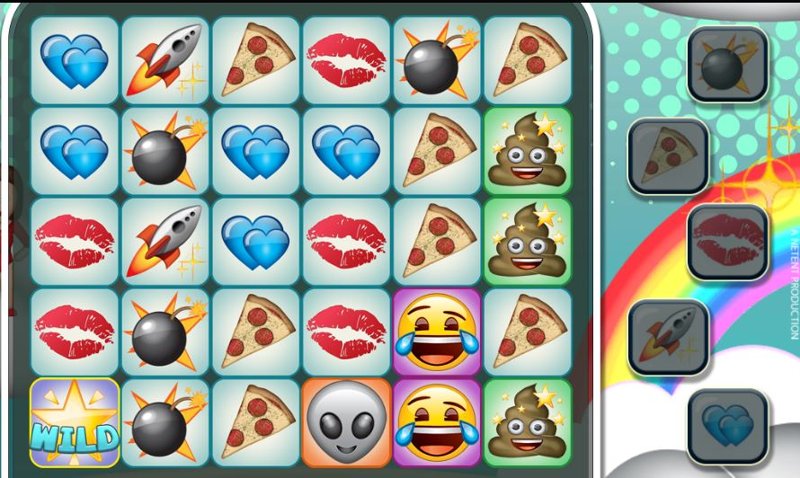 Welcome to the world of modern day communication, where cartoon images replace written speech. Netent has released a fairly accurate representation of most online conversations in the form of the slot game Emoji Planet. Needless to say, that all of the symbols on the reels are actually different emojis. There are bombs, rockets, kisses, hearts, laughing smiley faces, pizza slices and even aliens. And the backdrop is just cartoonish rainbows and clouds, with the occasional cameo appearance of Gonzo – a character from one of Netent’s most popular offerings. We’ll be brutally honest here and say that Emoji Planet isn’t this developer’s most impessive game. There isn’t anything special or outstanding about the visuals, and frankly, they’re just not up to par with the providers usual standards.

The layout in Emoji Planet, however, is anything but standard. It features 6 reels and 5 rows with no paylines. Winning combinations are formed by landing clusters of 5 or more identical symbols. Nevertheless, stakes are quite reasonable, starting at a minimum of 20p per spin. And the maximum bet on these reels will set you back a total of £200 per single spin. Better yet, there’s a very handsome jackpot of 10,000 coins waiting for you.

Emoji Planet uses the Avalanche feature, similar to Gonzo’s Quest – hence the cameo. What this means is, whenever you land a winning combination the symbols in it will disappear, and their place will then be taken by other icons, which in turn opens up the possibility for additional wins. 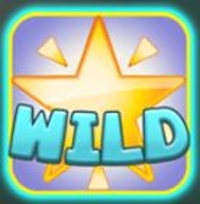 The yellow star symbol is Wild and can appear in any position, anywhere on the six reels. What’s more, it can substitute for any and all of the other symbols – no exceptions. However, the Wild doesn’t come with any payouts of its own. 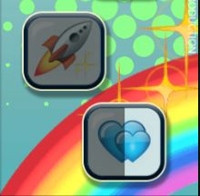 You will notice by the side of the reels that there are five different emoji meters. Landing winning combinations with the respective emojis (rocket, pizza, bomb, kiss and double hearts) will fill those meters. In fact, it takes 12 symbols to fill a single meter, at which point its respective feature will begin.

For example, once you have activated the Bomb Feature, it will destroy 8 random symbols on the reels. Moreover, each of those symbols will award you a random coin win of between 5 and 100 times your bet level.

The Pizza Feature, on the other hand, will form a 3×3 overlay of a random symbol on the reels. It can be any symbol except only for the Wild.

Then we also have the Kiss Mark Feature to look forward to. It will place 3 Sticky Wilds randomly on the reels, each of which will have three lives, and whenever the Sticky Wilds take part in winning combos, they lose a life. Finally, once they lose all their lives – they disappear from the screen.

Look out also for the Rocket Feature, which will see a stack of 10 Wilds appear on and above one of the reels. As it does, you will also get to see the rocket launch from that reel.

Last but not least we have the Two Hearts feature. The concept of this one is overly simple, where you just get a cash prize. That cash prize will be multiplied by the number of times you filled the meter plus 1.

It may seem like there’s just way too much going on in Emoji Planet, but really there isn’t. Basically gameplay revolves around the avalanche feature, which you hope will bring you enough winning combinations with certain symbols. If you gain enough of those, you will trigger one (or more) of the Emoji Features. It’s pretty simple and there’s big winning potential in this medium variance title.