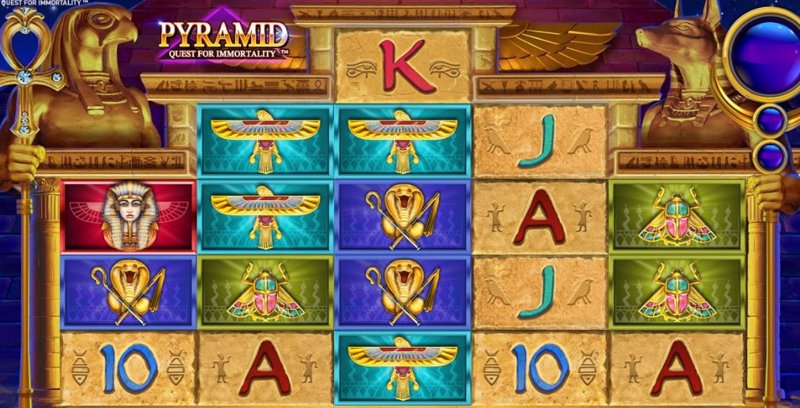 The theme of Ancient Egypt, pyramids, and pharaohs is a popular one with online slot games, so when creating new offerings in this genre developers have to really go out of their way to deliver something new and exciting. That seems to be exactly what Netent have achieved with Pyramid: Quest for Immortality. It boasts both an unusual and intriguing setup, as well as truly amazing graphics. You will find yourself at the entrance of the pyramid with two awe-inspiring statues on either side of it. One is of Anubis and the other of Horus. Both are bathed in a golden light coming from the inside of the pyramid, which provides a great contrast to the blue coldness of the night outside, and adding to the whole vibe is the captivating oriental soundtrack.

Now, the layout will strike you as unique as soon as you lay eyes on it. There are five reels, each with a different number of rows. The outermost reels each have 3 rows, whereas reels 2 and 4 each have four, and finally, the middle reel boasts the most rows at 5. All of this comes with a staggering 720 ways to win. Naturally, you cannot change the number of paylines here, but given the very generous betting range, you won’t really have to. Stakes span from only 10p per spin up to £200 per single spin.

Though the game looks incredibly sophisticated, the setup is more basic than you’d think. In fact, the entire structure here revolves around a single feature – the Avalanche technology. You might be familiar with this from a number of other online slot games. The concept is that every time you land a winning combination, the symbols that partake in it disappear. This, in turn, makes room for new symbols to fall in their place, which can make way for new winning combinations. Hence, you get to potentially make more out of each and every spin.

Now, in Pyramid: Quest for Immortality the Avalanche technology also offers players a multiplier possibility: with every 3 consecutive Avalanches that you trigger, the multiplier will increase by 1, and if you keep going on this way you can reach a multiplier of up to 10x.

This Netent offering boasts only one special symbol and that is – you guessed it – the Wild. It can replace any of the existing symbols without exceptions, and therefore, it will be able to help create winning combinations throughout gameplay. However, the Wild symbol doesn’t just appear randomly on the reels like in so many other games.

Perhaps the main drawback of Pyramid: Quest for Immortality is the lack of diversity concerning special features. In other words, there are no free spins or pick-me games. However, trying to get that Avalanche Multiplier to increase can suck you in pretty hard all on its own, and those visuals? To die for. Plus, this is an extremely volatile offering, and wins can exceed even your wildest expectations. As a matter of fact, the maximum payouts per single spin can rise up to a mindboggling 36,000 times your bet.