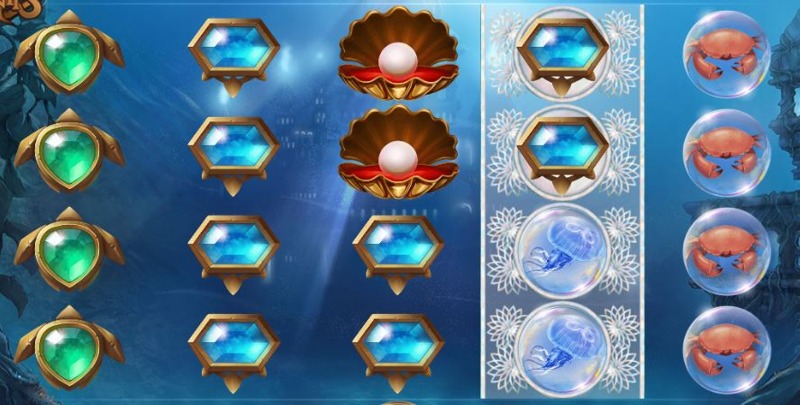 Ah, Atlantis – the long lost mythical city under the sea. Who wouldn’t love the opportunity to go search for the sunken city and roam its ancient structures? Well, software developer Netent is offering players that exact opportunity with the online slot game Secrets of Atlantis. It’s a lovely offering, with a very romantic vibe and some pretty unusual characters on the reels. There’s a nice soundtrack, which may at times be slightly overpowering, but you can always exercise the mute button at the bottom of the screen if necessary. Note also some of the details in the backdrop, like the sea horse sculpture or the seaweed growing out of a clay pot. As for the symbols, you will see a variety of sea creatures as well as gem stones shaped like them. Offering the 400 coin jackpot is the clam holding a giant white pearl.

Moving on to the layout then, and it’s slightly larger than what is considered to be the industry standard. It features 5 reels and 4 rows instead of the regular 3, and there is a total of 40 paylines available. However, these are fixed and you can’t regulate them. That doesn’t affect the betting range too severely, in fact, the minimum bet is quite acceptable at only 20p per single spin. The maximum doesn’t go too high either, settling at only £4.00.

There are only two special features in Secrets of Atlantis and neither of them are traditional. During the Highlight feature – which is perhaps the more attractive of the two – you will notice that on every spin symbols on the middle reels (2, 3 and 4) can be highlighted randomly. If all symbols on those reels happen to be highlighted, then this will trigger a Colossal Symbols Respin. As a result of this, reels 2, 3 and 4 will all merge together and become one. Furthermore, they will display Colossal symbols (3 by 4 blocks), and if after that the merged colossal reel ends up being fully highlighted again this will trigger another Colossal Symbols Respin.

The Wild in this game isn’t simply your regular Wild symbol. In this case, it’s actually a full-reel tall mermaid. And she can appear on any of the reels, either fully or partially. Furthermore, the Wild can replace any of the symbols that are present in the game. There are no exceptions here, as there are technically no other special symbols.

But the Wild mermaid also comes with another perk. The Wild is actually also a Nudge Wild. This means that whenever it appears only partially, it will be nudged either up or down to cover the entire reel. Hence, this will make the whole reel fully Wild. Things get really exciting if the Nudge Wild happens to land on the three middle reels during a Colossal Symbols Respin.

Secrets of Atlantis offers a tranquil setting and a great theme, and while it doesn’t have a whole lot of bonuses in store, it can still make for a pretty wholesome gaming experience. In addition, this is a medium variance title where you have the opportunity to win up to 1,600 times your stake on every spin. Plus, you get to trigger the special features at regular intervals, so winning chances are pretty good.