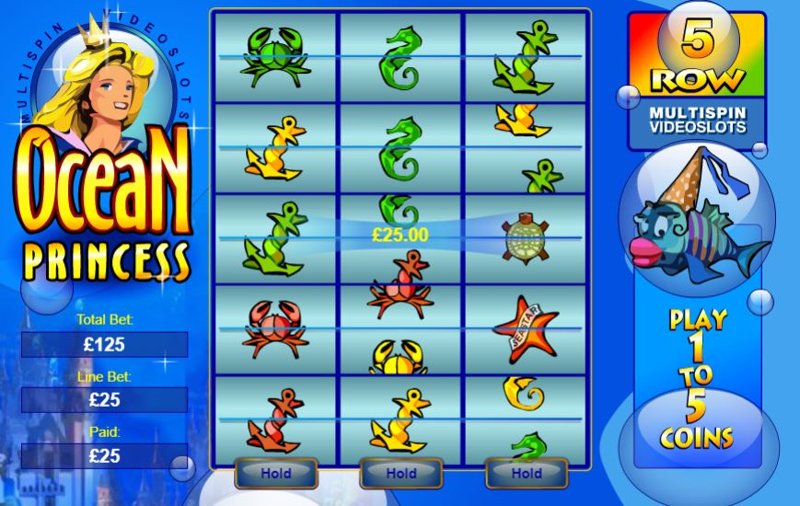 Ocean Princess is an online slot game that was created by software developing giant Playtech, and even though it’s a relatively new title, the game has a very strong nostalgic vibe to it – and that’s not only because of the very simplistic 2D graphics. The setup of this title is also quite basic, reminiscent of the old school slot machines. Obviously the theme here is a nautical one, and at its very center is a lovely mermaid, who is also the princess in her underwater kingdom. As far as the backdrop goes, you will find that there isn’t all that much going on in it. It’s pretty much just a blank blue slate, and only in the very distance can you make out the castle at the bottom of the ocean. Let’s pay more attention to the reels themselves, then; these feature a variety of sea creatures as their symbols, such as crabs, starfish, sea turtles, and sea horses. Each of these types of symbols comes in different colors, and in addition, there are different colored anchors as the lower value symbols, as well.

This brings us to the game’s layout, which you will notice features something of an inverted grid. If most video slots these days have 5 reels and 3 rows, this title boasts the exact opposite. Namely, it has the more traditional 3 reels, and each of them comes with 5 rows. In addition, there are 5 active paylines in total – one for each row – and these are fixed so you will not have the ability to regulate them. What you can regulate is the coin value as well as the amount of coins you would like to bet pet spin. Your options range from 1 to 5, which makes for a very agreeable betting range. Stakes here span from a minimum of only 5p per spin and to a maximum of £125 per single spin.

In purist old school slot machine fashion, Ocean Princess lacks any real special features. This means there will be no bonus features such as pick me games, cash trails, or freespins. There is not even a Gamble Feature that could help diversify gameplay a little bit. Here, it’s all about keeping things very simple and focusing on nothing but gameplay itself.

The only thing that Ocean Princess boasts that doesn’t necessarily fit within the classic slot game genre is the Wild. The Wild symbol comes in the form of a crown on these reels, and it will be able to replace any of the other symbols to help form winning combos, and since there are no other special symbols there will be no exceptions to this rule. But not only that – the Wild also happens to be the most lucrative symbol in the entire game. With its help you have the possibility of pocketing up to 1,000 times your line bet. 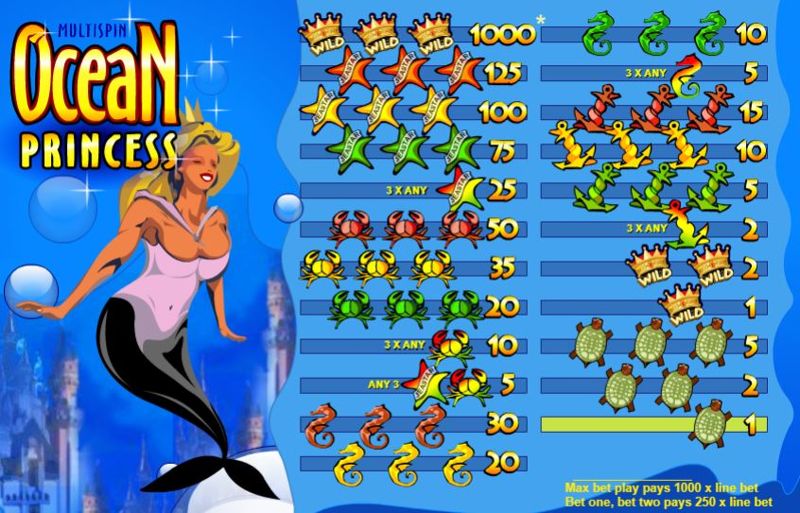 Ocean Princess is quite a basic offering, that much is beyond obvious, and if that is exactly the type of slot you’re looking for then we certainly recommend checking it out. Perhaps its main attraction is the unbelievably high RTP of 99.07%.