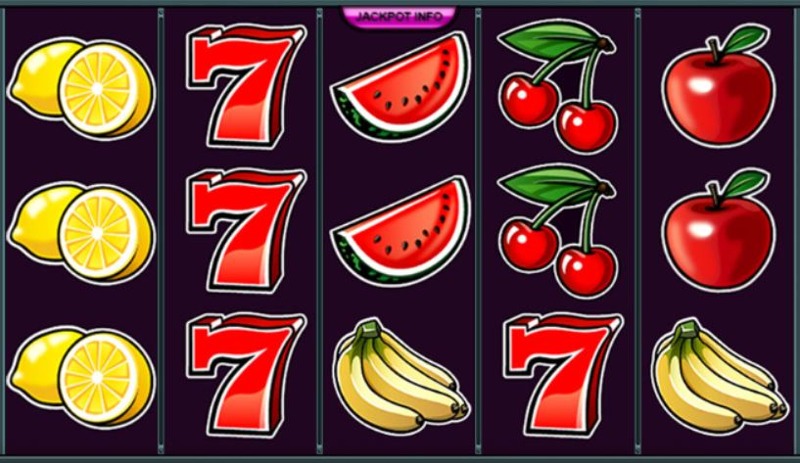 Purple Hot is a classic themed online slot game and it’s brought to you by software manufacturer Playtech. As classic slots tend to do, this one features a selection of fruit symbols on its reels. They will most probably all be familiar to you from other traditional fruit machines, and the symbols in question are oranges, cherries, watermelons, bananas, lemons, plums, and apples. The only other symbol present in this offering is the red lucky 7 – another typical icon for this genre – and also the highest value symbol on these reels, offering payouts of up to a staggering 5,000 coins. Now as far as the game’s visuals go things are also fairly basic, simple 2D with no fancy extras like animated features or the glossy finish many modern offerings boast. The reels seem to be set against a concrete wall with four torches burning at its very top, and above it all is just a purple gradient and nothing special.

Now that we have covered that, we can move on to the game’s setup and layout. Starting off with the latter, we should point out that it’s a little more contemporary than what this genre might imply with a grid of 5 reels and 3 rows. These come with a total of 5 active paylines, however, the paylines are not fixed and this means that players will have the freedom to play with less of them if they would like to. Stakes are also within a fairly liberal range, starting at a minimum bet of 1p per single spin and rising to a £25 maximum.

Now, as far as old school style slot machines go, they don’t normally have many special features in store and as a matter of fact it’s rare for them to have any at all. Purple Hot doesn’t have any of the typical bonus rounds such as freespins or pick me games, and there are also no special symbols either with the exception of the Scatter.

What Purple Hot does happen to have is a Gamble Feature. After any winning spin, it will allow you the option to gamble your prize in a simple side game of cards.

One last thing about this title that is also probably its main attraction is the Progressive Jackpot. Actually, there are four different progressives that you can win based on your stake. The minimum amount to qualify is £2 per spin, and you also need to have all paylines active. To win, you will have to land all five lucky 7s on a payline.

Purple Hot is a decent offering, although there’s not much going on in terms of features or visuals. Nevertheless, it’s a pretty popular title and that is mainly because of the prospect of winning one of the four progressives.