If there’s anything that defines the 1950s it’s the sound of that doo-wop music, and that’s basically what this Rival Gaming slot places its focus on. Doo-Wop Daddy-O takes you to one of those traditional American diners, where black and white tiled floors, jukeboxes, and huge cheeseburgers can be found in abundance. While the reels are still you’ll hear the chatter of people inside the diner, but once you press that Spin button the doo-wop music will overtake your speakers.

Graphically speaking, Doo-Wop Daddy-O has some interesting symbols upon its reels – which are actually shaped like a jukebox, as it happens. The first two symbols are present in the form of a jukebox and a set of vinyl records, which can both multiply your stake by up to 65x. Then comes the roller skate followed by a pink poodle. The remaining four symbols of the game are different characters, starting with the waitress and then moving on to the diner’s owner, a female customer with red lipstick and shades offering pay-outs of up to 400x your bet, and a typical 50s man who bears more than a passing resemblance to one of the T-Birds from grease offers the same reward.

Doo-Wop Daddy-O is a game that takes place on a layout consisting of five reels and three rows. You will also see a set of 20 pay lines present across the reels, which you have the ability to adjust should you so wish to. You can also select your bet by choosing a specific coin value  between 1p and 25p, then choose how many of those coins you’d like in operation per line between one and ten. The maximum bet possibility is £50 per spin. 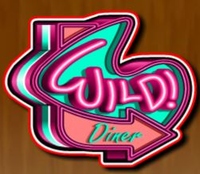 The diner’s neon-lit sign is the slot’s wild symbol, and this one can really help you with forming winning combinations. Wilds have the ability to appear anywhere and they will substitute for all other standard symbols within Doo-Wop Daddy-O.

What’s even better is that if you form a winning combination solely made up of wilds, you’ll receive quite the boosted reward; five of them on a pay line will multiply your stake by 10,000x over. 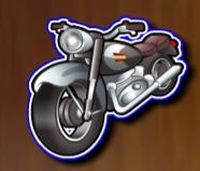 We all know the freedom a motorbike brings, right? Well, it seems quite fitting that in this slot game it operates as the jackpot symbol. It can appear on any reel and you only need to bring two of them into view anywhere to trigger a pay-out.

Yet, it’s also responsible for rewarding you with a big jackpot pay-out whenever five of them show up across the reels. Should this occur, your wager will be multiplied by 600x as your pay-out. 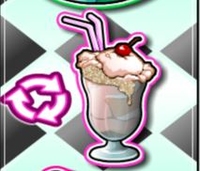 Diners are known for their all American food, with milkshakes complete with cream and cherry on top being one of the popular choices. Doo-Wop Daddy-O features such a treat as the free spins scatter symbol. Bring three or more of the symbol into view and you’ll be able to access the free spins round.

One more thing that was prominent back in the 50s is Drag Races. There’s a symbol of one of these drag cars within this game, which operates as its bonus round trigger. Three or more of them showing up across the reels will activate the slot’s Drag Race Bonus Round, and you’ll still get a multiplier for the appearance of the bonus symbol prior to it starting, too.

Up to 40x your bet can be won from the bonus scatter. Participating in the Drag Race will allow you to boost your win balance even more, too.

Doo-Wop Daddy-O does feature a theme that has been done a few times, but Rival Gaming is undoubtedly one of the first developers to have thought of such, releasing the game in 2010. The graphics still look exceptionally appealing though, while the inbuilt features add to the slot’s allure. With free spins, a bonus round, jackpot and wild symbols, Doo-Wop Daddy-O will certainly appeal to plenty of gamers.