We’ve probably all had fantasies of huge fortunes coming our way. The hope is that they don’t remain fantasies, and Fantasy Fortune from Rival Gaming gives you the chance to try and turn them into reality. The slot is one of the developer’s older releases, first coming to light in 2012. Because of this the slot doesn’t really incorporate the highest quality graphics, but that’s of little consequence once you see its magical, medieval theme. With dragons, unicorns and more appearing on its reels, you’ll never want to leave this fantasy land.

The game itself takes on the role of a standard video slot, featuring a set of five reels and three rows altogether. Across this interface there is a set of 20 pay lines for you to place your bets on, but you can adjust the active number of these using the “Select Lines” button. To add to that, you have the ability to alter your wager as well. First of all, you need to choose a coin value between 1p and 25p, then select how many coins you want in play per line between one and 10. This gives you the chance to introduce a wager of up to £50 per spin.

As noted, the game is nothing special in terms of graphics. This is unfortunate as the theme is a great one that could benefit greatly from better visuals. That being said, all of the symbols are understandable, starting with a crown with wings on it, then comes a gold goblet offering maximum rewards of 80x your wager. There’s a female character who looks like the ice queen, and she is followed by the symbol of the goblin. A unicorn symbol comes next, followed by the red knight, then a captured maiden, while the valiant white knight makes up the slot’s highest paying standard symbol. 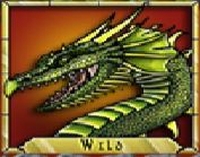 What Fantasy Fortune lacks in graphics it more than makes up for in special features. This begins with the inclusion of a wild symbol, which is present in the shape of the dragon. It can come into view on any reel and will substitute for all other standard symbols. Therefore, it has the possibility of assisting with forming winning combinations across the reels.

If you manage to spin five of this one into view on a winning pay line, you’ll receive a maximum pay-out of 5,000x your bet. The only symbols that the wild won’t stand in for are the scatter, jackpot, and bonus additions. 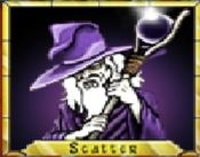 As far as the scatter symbol goes, Fantasy Fortune provides one in the shape of the wizard. He can show up anywhere and still reward you with a magic pay-out of up to 25x your wager.

Furthermore, it is this symbol that can cast a spell and trigger the slot’s free spins function; you just need three or more scattered wizard symbols to appear anywhere on the reels. This will then reward you with a total of 10 free spins to enjoy.

During this round, any winning combination that you form will receive a triple multiplier, too. 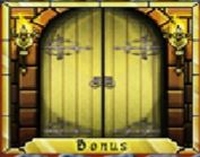 You will also see that a symbol of a set of castle doors comes into view on the reels during base game spins. It is this one that represents the bonus symbol and has the ability to trigger the bonus round. Three, four or five of them showing up anywhere will activate the bonus round, which sees you take on the role of the white knight who needs to choose which door to go through to make his way through the castle – left, right or straight ahead.

You basically keep going through doors until you reveal the dark knight behind one of them. Every successful door that you go through will amass bonus winnings. 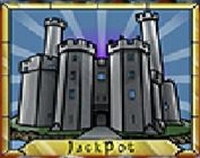 Fantasy Fortune also has its own jackpot win, which comes from the appearance of the castle symbol. Three or more of this one showing up on a winning pay line will activate a jackpot pay-out.

Up to 1,000x your wager can be won from this one, giving the slot a bit more of an appealing edge.

While this slot game can very easily be slated for its low-quality graphics, once you start playing it, the game does have plenty of appeal. This is because the inbuilt special features more than make up for its visual shortcomings. We’re very impressed with the free spins, wild and bonus round perks, and when you combine these with the scatter and jackpot possibilities, Fantasy Fortune is a game that you won’t want to stop spinning.