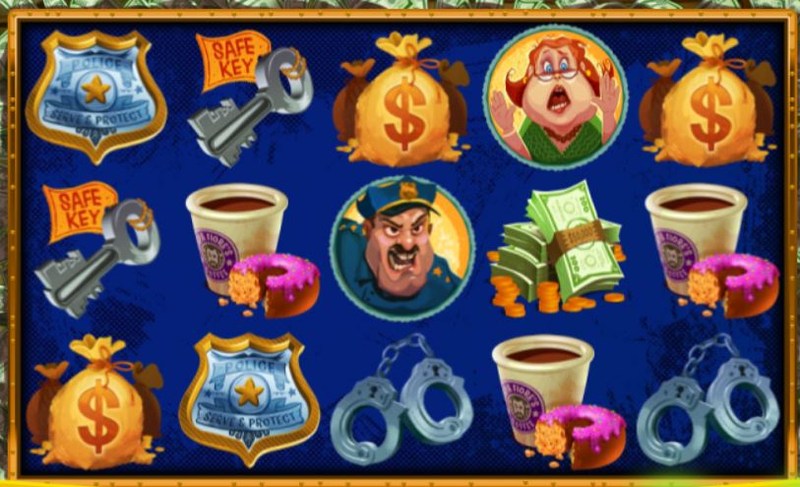 It seems as though the cash bandits are back at it again, with more banks to rob and more cops to avoid. Cash Bandits 2 is the second installment of this game from the Real Time Gaming (RTG) brand, and it provides quite the enhanced experience for avid slot gamers. The graphics have been given a bit of a makeover too, with sharper and more defined symbols appearing on its reels.

Speaking of those symbols, they’ve had a slight shake up since the first game, making Cash Bandits 2 a bit more of an alternative slot to its predecessor. Some of them have remained the same though, so you’ll still see the doughnut, the handcuffs and the money bags on the reels, however, you’ll also get to see the burglar alarm symbol, the ‘Wanted’ poster, the safe key and the police badge as standard symbols. These appear alongside the cop and the bank teller.

Cash Bandits 2 features a layout that consists of five reels and three rows which is exactly the same as the first game in this series. At the same time, it also incorporates a set of 25 paylines for you to place bets on, although you can adjust the active number of these easily with the relevant up and down arrows. As far as your bet itself is concerned, this is also something that you can easily change. Cash Bandits 2 provides you with values between 25p and £125 per spin, with buttons for autoplay and speeding up the game also being available to use.

When loading this slot up, you may also notice the jackpot total that is on display atop the reels. The total of this is continually increasing as players make wagers on the game, with no more than 1.5% of the Return to Player (RTP) rate contributing to such.

Jackpot wins in Cash Bandits 2 are triggered completely randomly, so you don’t need to make any specific bet to be in with more of a chance over other gamers. 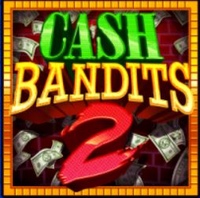 The slot’s own logo is the symbol that operates as the wild in this game. Whenever this one shows up on the reels, it will substitute for all of the other standard icons in the game. Therefore, it can be instrumental in helping you to form winning combinations across the reels. The only symbol that it won’t substitute for is the slot’s scatter addition.

Should you manage to form a win that consists of five wild symbols, your wager will receive a multiplier of 5,000x. 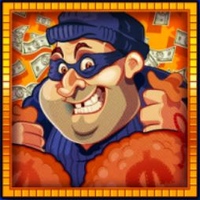 You’ll see the grinning face of the robber operate as this game’s scatter symbol, as he clutches onto two bags filled with money.

Scatters have the ability to provide you with a pay-out regardless of where they show up on the reels; five of them dropping into position across the reels will multiply your stake by 50x, for example, yet this symbol can also be responsible for providing you with so much more. 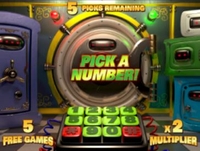 Cash Bandits 2’s Vault Feature is activated whenever you spin three or more of the scatter symbol into view. This will then take you to a new screen where five vaults and a keypad are on display. Each of the five vaults requires a random 1, 2, 3, 4 or 5 digit code to open up. You’ll get to choose 5, 6 or 8 numbers from the 10-digit keypad, depending upon the number of scatters that activated the round. Any corresponding numbers chosen will then lock in place.

You’ll be given five free spins of the reels to begin with, with a multiplier of 2x also being in effect at the beginning. Completing the aforementioned codes to unlock the vaults will then add 5, 10, 20, 50 or 100 free games to your total, respectively. At the same time, the prize multiplier will also be increased by up to 5x. Any re-trigger of this round will add an extra 5 free spins to your remaining total.

Cash Bandits in its original form was a great game from RTG, but the second installation of the slot brings even more excitement and visually stunning graphics to your screen. The inclusion of a progressive jackpot, a free spins round and a wild symbol isn’t anything different to the original, but considering how successful Cash Bandits was, it doesn’t really need to be. On the whole, Cash Bandits 2 stands out more so for its enhanced graphics and enthralling gameplay.