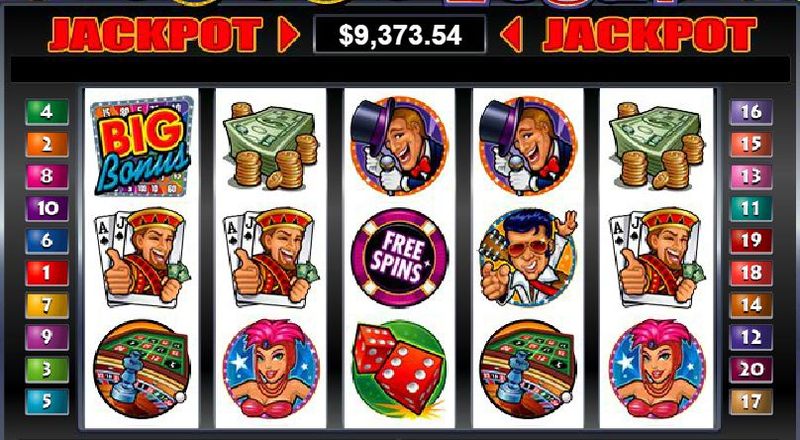 Things are known to get crazy in Las Vegas, and that’s never more apparent than in this RTG slot game. Take yourself off to the city of lights and experience all of its wonders. This game may be one of the older offerings in the developer’s catalogue, but that doesn’t make it any less appealing to play. The graphics are slightly dated in comparison to some other RTG games, but there are still a few inbuilt features to ensure that you get the full entertainment value from it.

Upon the reels you’ll get to see symbols of stacks of money, followed by an Elvis impersonator. One of the well-known Vegas showgirls also appears as a symbol, while a magician comes next. There’s a joker and an Ace card operating as a symbol, with the roulette table and the pair of dice making up the game’s remaining icons. So, the only question that remains is, are you ready to go crazy in Vegas?

The slot itself consists of a layout featuring five reels and three rows in total. This operates as a standard video slot layout, so it should look fairly familiar in this respect. Across this layout there are 20 paylines for you to wager on, yet you do have the possibility of customising these lines so as to suit your own personal preferences. At the same time, you can use the relevant buttons to be able to adjust your wager level between 1p and 10p per line. This means that Crazy Vegas offers up a maximum bet level of £2 per spin.

At the very top of the Crazy Vegas game, you’ll see a progressive jackpot total. This increases whenever someone places a bet on the slot. The total amount is able to be won by anyone playing the slot, as it is triggered completely randomly. Therefore, it doesn’t matter what kind of bet you have in-play, the jackpot is still open to you. 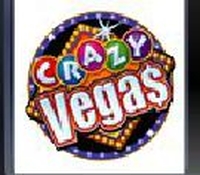 It’s common for online slot games to have both a wild symbol and a scatter symbol for you to benefit from. In Crazy Vegas though, they have been merged into one and the same symbol. The slot’s own logo operates as this symbol, so you’ll find that it’s first function is to substitute for all other icons within the game. Therefore, it can be instrumental in helping you to create winning combinations across the reels.

The secondary function of the logo icon is to appear anywhere and still reward you with a pay-out. That’s a standard scatter symbol function. Three, four or five of them coming into view anywhere will ensure that your stake is multiplied by 5x, 20x or 100x, respectively. Therefore, it has even more appeal than any standard wild or standard scatter. 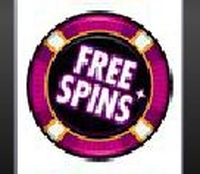 As you spin the reels of the game, you’ll also notice Free Spins symbols passing by in the shape of poker chips. You’ll need to spin three of these into view, one on each of the central three reels to be precise. These chips will then spin around and reveal the number of free spins that you will be rewarded with. Additionally, the free spins multiplier amount will be shown at this point.

The sum of the first two chips to spin is the number of free spins that you’ll be on the receiving end of, while the number on the third chip indicates the multiplier for the feature round. The free spins round is not something that you’re able to re-trigger. 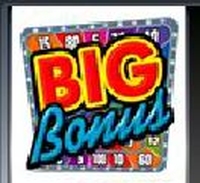 Something else that you may see come into effect is the Big Bonus Feature round. To trigger this, a Big Bonus icon needs to show up on the first reel and another on the fifth reel. This will provide you with a large wheel, with the outer part spinning clockwise and the inner part counter clockwise. You just need to press the ‘Big Bonus’ button in order to stop the wheels.

Despite being one of RTG’s older slot games, Crazy Vegas actually has a lot more to offer than many of its newer titles. The bonus round, the wild scatter symbol, the progressive jackpot and the free spins all conspire together to ensure that entertainment is had from start to finish with this one. If this is what it’s like to be crazy in Vegas, then we can’t wait to go.