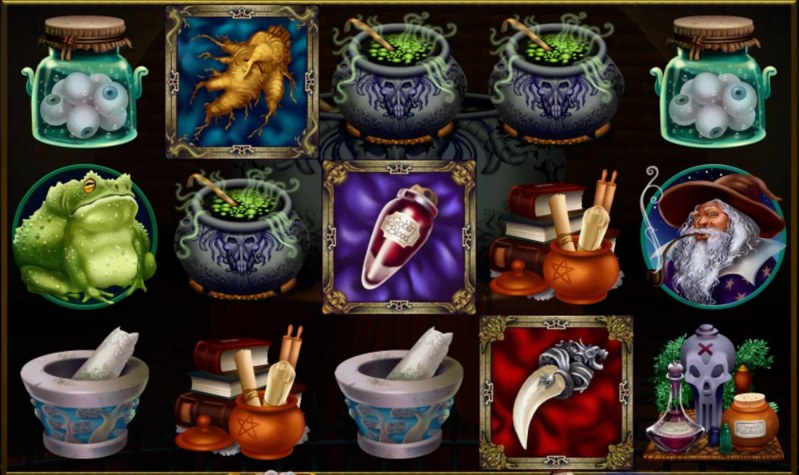 When most people picture witches, they think of gnarled old women with large hook noses covered with warts, draped entirely in black and with the power to cast dangerous spells on whomever they choose. Well, Witch’s Brew from RTG does bring the magic to your screen, but the witch casting it is younger and fresh faced. Maybe she’s cast a spell on herself to alter her appearance, but who are we to make such accusations?

The graphics in this slot game are of the greatest quality, meaning that you’ll witness everything in crisp visuals. You’ll be taken to the basement of the witch’s abode, with dark hallways and spiderwebs on display in the background. Upon the reels you’ll find the various symbols, starting with a pestle and mortar, a glass jar filled with eyeballs and a set of spell books. Next comes a candle and a set of potions as two further symbols. A large toad and a cauldron filled with green mixture can also be seen, while a black cat makes up another addition to the game. The two highest paying symbols are of the old wizard and some kind of root.

Witch’s Brew is played on a standard layout that consists of five reels and three rows. Across this layout there are 25 pay lines in operation, but you can adjust the active number if you so wish to. Additionally, you have the ability to customise your wager by using the relevant up and down buttons at the bottom of the reels. Doing so will give you the chance to select from bets between 25p and £2.50 per spin. 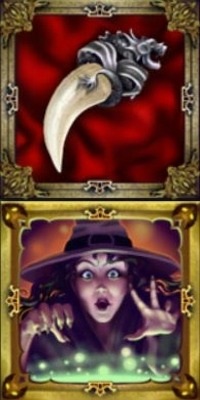 The Witch’s Brew game doesn’t just have one wild, it has summoned up a second as well. First of all there’s the dragon fang wild which operates as the standard wild addition; joining this is the symbol of the witch herself, but she is the slot’s double wild.

Both of these symbols can only show up on reels two, three and four, but they will sub in for all other symbols of Witch’s Brew except the scatter symbol. Of course, if the witch contributes to a winning combination, then she will also double the pay-out that you receive for it. 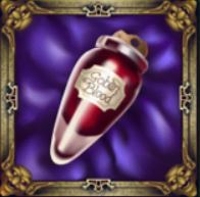 As far as the game’s scatter symbol is concerned, this is present in the shape of the goblin blood in a vial. Scatter symbols are able to provide you with a pay-out from any location on the reels, but it also activates the game’s Goblin Blood Feature, too.

Goblin Blood Feature – You’ll need to bring three, four or five of the scatter symbol into view in order to win 10, 25 or 125 free spins, respectively. During the entirety of the free spins round, wild symbols will appear grouped on their central three reels and all prize pay-outs are doubled, too. It’s also possible for the Wild Brew feature to activate during free spins. 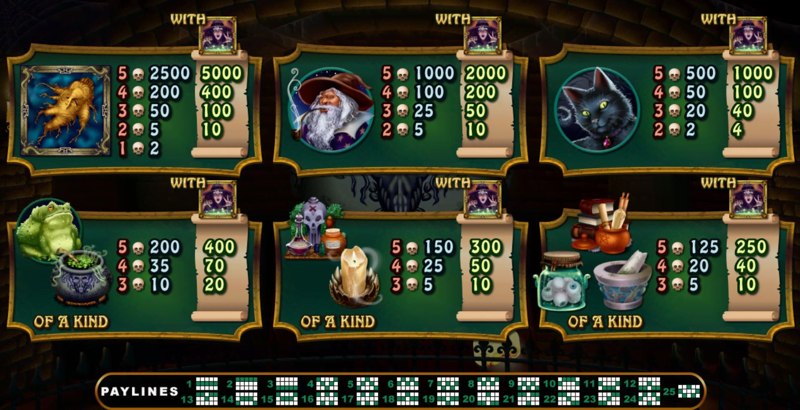 We have to admit that we enjoy games about magic and witches and all of that supernatural stuff. Witch’s Brew satisfies our love of this genre, thanks to the wonderful visuals and the inclusion of two feature rounds to enhance gameplay. With two wild symbols and a scatter in play as well, there’s little more that RTG could do make this game more fun. Overall, Witch’s Brew stands out for all the right reasons, and we highly recommend it.