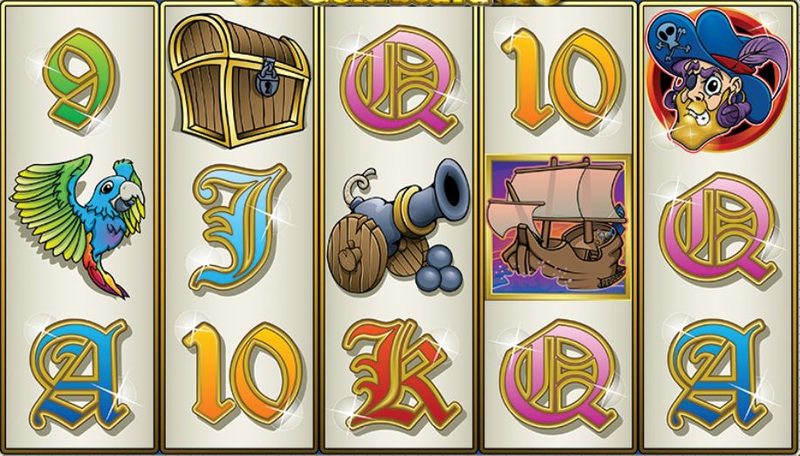 You’ve heard of Blackbeard, but what about Goldbeard? Potentially the long lost brother of the more famous pirate, Goldbeard seems to be more interested in maintaining his gold-coloured beard than making anyone walk the plank. This RTG game brings a thoroughly entertaining side of pirate life to your screen, with some wonderful features built into a captivating slot.

It does this by executing the overall theme perfectly and incorporating some fun and surprising symbols into the game. The first of these are present in the shape of the often seen playing card additions, but they’re soon joined by a treasure chest and a cannon. A colourful parrot comes next while Goldbeard’s pirate ship appears on the reels as another symbol. And if the pirate life is already appealing to you, there’s plenty more where that came from. Yo-ho me hearties!

Goldbeard has a standard video slot layout that consists of five reels and three rows in total, therefore, everything should look familiar to regular slot gamers. Alongside this design, the developer has opted to add a total of 20 paylines which you can customise with the relevant buttons at the bottom of the reels. You’re also able to alter the bet that you place on the paylines from the same place. This gives you the chance to choose between bet amounts of 20p and £2 per spin. Goldbeard also has its own autoplay function for you to use as you like.

This slot is part of the range of games from RTG that feature a progressive jackpot total. You can see this value increasing at the top of the game’s reels every time someone places a bet on the slot. In order to win this amount you don’t need to do anything specific, you just keep spinning the reels and the jackpot amount is paid out at random. Therefore, any bet of any amount can activate a progressive jackpot win. 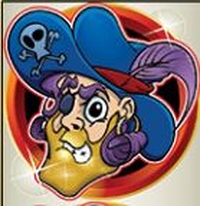 There couldn’t possibly be a slot game about a pirate named Goldbeard without the man himself appearing on the reels. Fortunately, whenever he does he will function as the slot’s wild symbol, so he will substitute for all other symbols (except for the scatter addition) in order to assist you with forming winning combinations.

The wild symbol is able to appear on reels one and five only, however, if he does manage to assist you with creating one or more wins he will also double the pay-out for such.

Freespins – The game’s free spins round will also come into play whenever one or more wild symbol shows up on both reels one and five at the same time. Each of these wilds then reveals a number between two and four, representing the number of free spins available. During the round, the Goldbeard wild can also show up on the third reel to help with forming wins on a greater scale. Additional free spins will be revealed with the appearance of Goldbeard on reels one and five while the round is in operation up to a maximum of 24. Furthermore, all wins during the free spins feature will receive a triple multiplier. Yaarrgghh! 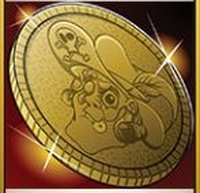 There’s also the inclusion of a gold coin symbol on the reels, which is this game’s scatter icon. Scatter prizes are multiplied by the total bet in play, with five of the scatter symbol being in view providing a multiplier of 100x.

This one doesn’t need to be on a winning payline to provide a pay-out either – as long as two or more are present anywhere, you’ll get a reward. 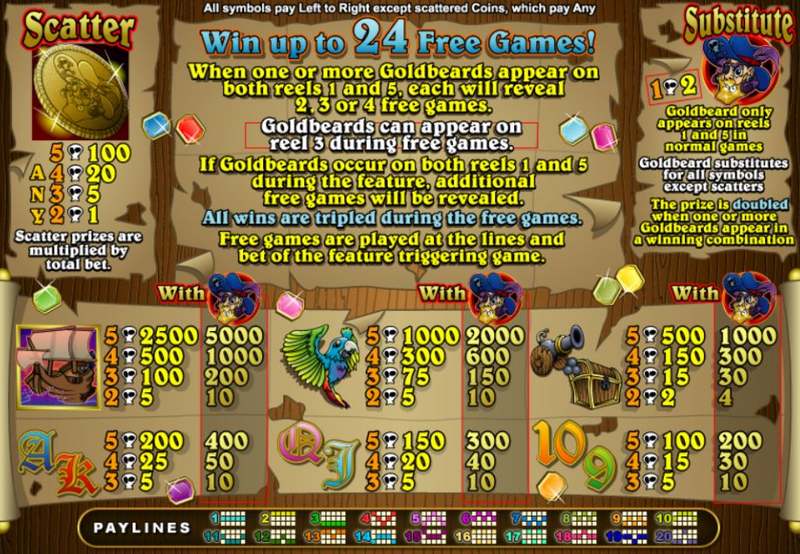 There’s something to be said for pirate-themed games, they never get old. Goldbeard has a fun and playful set of graphics that really bring the theme to life without getting too dark or serious. Goldbeard himself operating as a wild icon is another great perk, while the appearance of scatters and the triggering of free spins increase the entertainment factor. When you also include the progressive jackpot into the combination, it’s clear to see that Goldbeard has plenty to offer to the gaming community.