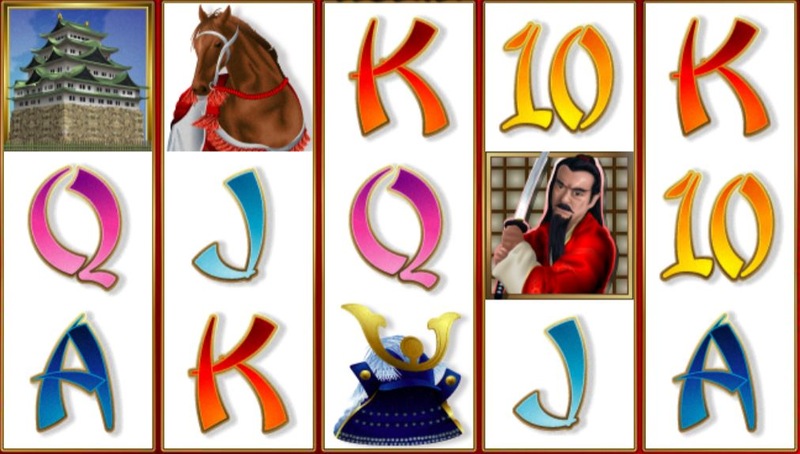 For those gamers who enjoy playing Eastern-themed slots, Ronin will present you with a Samurai adventure that will surely suit you palate. This RTG slot offering is one of the older releases from the developer, but it still offers high levels of entertainment thanks to the decent graphics and inbuilt features that it contains. Ronin is the name of the samurai in this slot, and he is on a mission to right all of the wrongs in the world.

The symbols that appear on the reels start with the green 9 and yellow 10, increasing up to the red K and blue A. Then comes the flag featuring Chinese symbols, while a samurai helmet can be seen next. Ronin’s horse also makes an appearance as a symbol, while an oriental palace can also be seen. This marks the game’s highest paying standard symbol, offering pay-outs of up to 2,000x your wager.

The layout of Ronin exists as a five reel and three row grid which is a standard video slot interface to play on. Across this layout, RTG has added a set of 20 fully customisable pay lines, so you to have as many active as you would like. There’s also the possibility of customising your bet by using the relevant up and down buttons. With those, you can choose from wagers between 1p and £5 per line. This being the case, the maximum overall wager stands at £100 per spin.

At the top of the reels of Ronin you will see a random jackpot amount. The value of this will increase any time someone places a bet on the slot. The amount can be won at any random moment, regardless of the amount that you’re betting on the game. 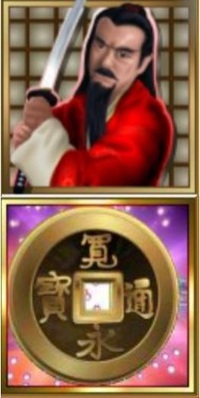 The symbol of Ronin operates as a dual scatter and wild. Therefore, it can provide you with pay-outs from any location whilst also substituting for all other standard symbols within the game. Five of this symbol coming into view anywhere will offer up a winning pay-out of 500x your in-play stake.

The other wild that is present in the game is that of the circular logo with Chinese characters on it. This is known as the Koku. The Koku wild is only able to show up on reel three, but it will substitute for all other symbols apart from Ronin. Should this one contribute to a winning combination, it will also double the pay-out that you receive.

If you manage to spin the Koku wild into view on the third reel and two or more Ronin wilds appear anywhere else, you’ll trigger one of three bonus features: 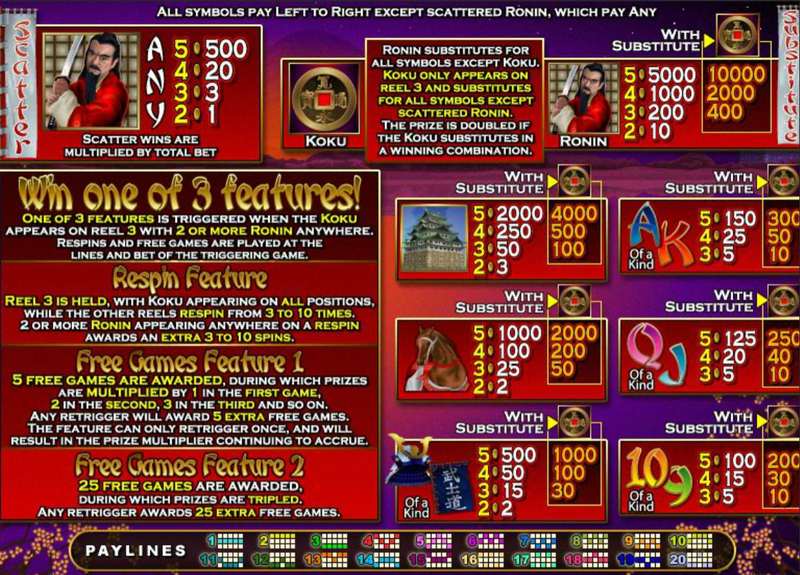 On the whole, Ronin offers up a very enticing slot game. The graphics aren’t the greatest, but the inclusion of three different bonus rounds more than makes up for the visuals. Combine that with the wilds and scatter and everything merges together to form an intriguing enough RTG offering.