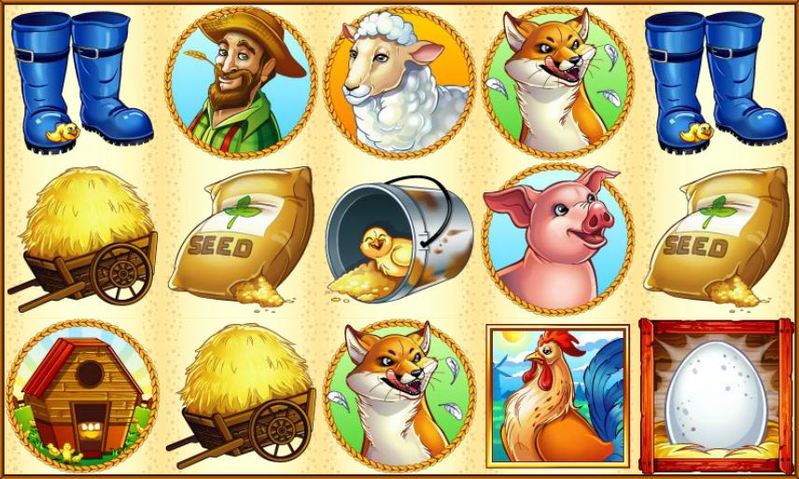 How would you fancy a job as a farm hand? Well, now is your opportunity to do just that, with the RTG slot known as Hen House. It’s an artistically drawn game visually, full of colour and character and very pleasing to look at.

The farmer has everything that you need to take control of the situation, offering up symbols of seed and grain to feed the hens, and hay for you to layer the floor with. You’ll get a pair of sturdy wellington boots to wear as you go about your business, with the chicken coop being your next location to take care of. You’ll be watched on by the sheep and pigs of the farm as you spread seeds for the hens in the coop, while the little chicks will snap up their fair share, too. Be careful though, because there’s also a crafty fox nearby who is looking to snatch a chicken or two for himself. The rooster is also present, waiting to crow in the morning at dawn’s light. If you do your job right though, you may just earn a big pay-out from the Hen House.

The design is made up of five reels and three rows in total. This is a standard video slot layout, and RTG has also added a set of 25 pay lines for you to place your bets on. However, if there are too many of these then you can customise them easily enough. Just use the relevant buttons at the bottom of the reels to do so. Additionally, your bet can be changed from the same location. Hen House gives you the chance to place bets of between 1p and 10p per active pay line. This means that the game offers up a maximum betting possibility of £2.50 per spin.

At the top of Hen House’s reels you will see both a Minor and Major Jackpot. The totals of these will increase whenever someone places a bet on the slot. You’re able to win these totals quite randomly at the end of any base game spin. So, you don’t need to be placing any specific bet amount to be in with a chance of becoming a big winner. 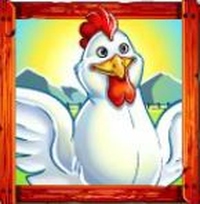 The white hen is the symbol that operates as the wild, therefore, if this one should show up anywhere it will substitute for all other standard icons in the game where a winning line can be created.

The hen wild can appear on reels two, three and four only, and the only exception to its substitution rule is the scatter icon of Hen House. 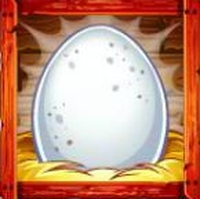 What came first, the chicken or the egg? You will be hoping it is the egg because this symbol is the game’s scatter, so it can show up anywhere on the reels and still provide you with a pay-out. This one is actually able to reward you with up to 200x your overall stake. That’s just the start of what makes this symbol so appealing though, because it can also trigger a bonus feature round.

Pick Feature– Spinning three or more of the scatter symbol into view across the reels will activate this feature. Once this round becomes active, you will see nine hens within the chicken coop. You’ll then need to select them one at a time to reveal eggs, a golden egg, a rotten egg, or a bonus symbol. You’ll start out with five free spins and a prize multiplier of 1x. The Henhouse Pick Feature is separated into three rounds of its own, which are as follows:

Should you reveal a rotten egg during any part of this feature, then it comes to an end and the free spins function begins. 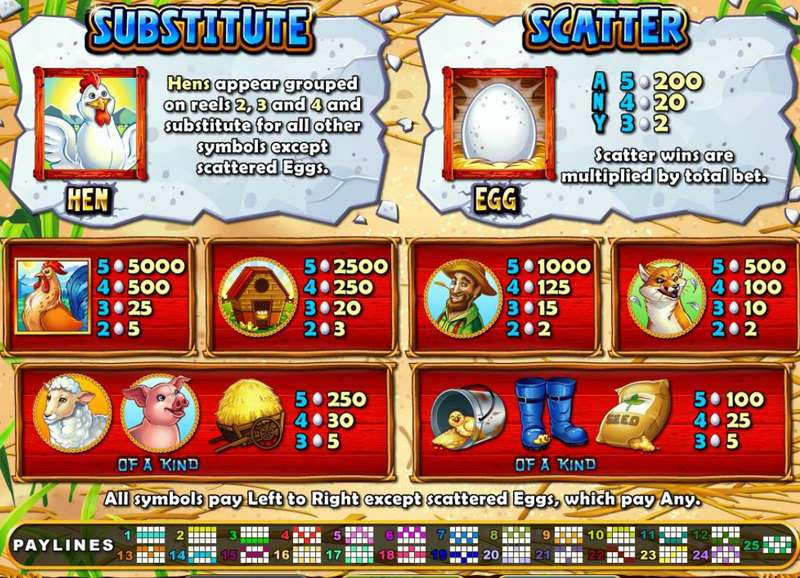 Hen House is a very fun game, featuring some of RTG’s best graphics. The symbols upon the reels stand out very nicely, while the overall theme is fairly unique within itself. Triggering the bonus feature round will make things even more entertaining for you, while it’s always great to have the possibility of winning a progressive jackpot.