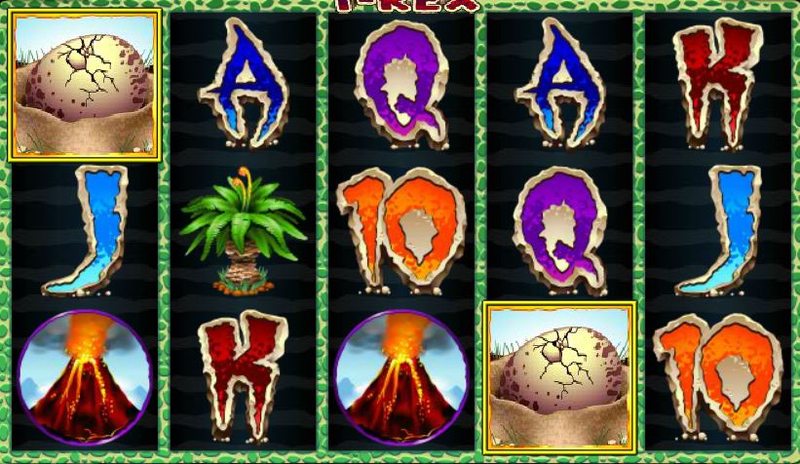 You don’t have to be a genius to guess what the theme of this slot is going to be. The T-Rex is known far and wide as being one of the most terrifying dinosaurs to have ever existed, and it appears on the reels of this RTG slot game alongside numerous other creatures from the same period. Yes, T-Rex will take you back to prehistoric times, where you’ll get to witness a variety of dinosaurs take over the reels – and despite the fact that this slot was created back in 2009 it features some truly wonderful graphics within.

The background of the game provides you with a scene featuring plenty of vegetation and volcanoes, while upon the reels the slot’s symbols start out with the inclusion of playing cards running from the green 9 to the blue A. Next in line is a green plant, while a volcano also appears as a symbol. Then comes an Ankylosaurus complete with armoured body, followed on by a Triceratops with its three horns and hood. The Stegosaurus is the highest paying standard symbol of the game, providing a maximum pay-out of 5,000 your stake.

This RTG slot game takes place on a layout that consists of five reels and three rows altogether. That’s the standard video slot grid, and across this setup RTG has included a set of 25 pay lines. You’re able to customise the active number of pay lines easily enough though, and you can also adjust the value of your wager. The minimum bet per line stands at 1p, while the maximum is £1 per line. Overall, the game’s maximum wager stands at £25 per spin.

At the top of the T-Rex slot’s reels, you’ll see a random jackpot on display. The value of this jackpot will keep increasing as players continue betting on the game. It’s a progressive that is paid totally randomly, so you don’t have to do anything special to be in with a chance of winning it. Simply continue playing T-Rex and you could find yourself getting lucky. 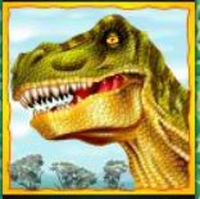 Prepare yourself for the arrival of the T-Rex, because this dinosaur makes up the game’s wild symbol. As such, it will substitute for all other standard symbols in the slot, although it can only appear on the third reel. The scatter symbol cannot be substituted by the T-Rex, though.

If the wild symbol manages to form part of a winning combination then you’ll also see that your pay-out is doubled. Five wilds on a winning pay line will reward you with 10,000x your in-play stake. 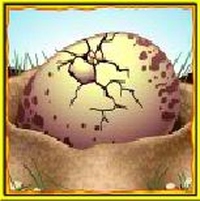 The dinosaur egg can also appear in this game, and this represents the scatter symbol. Scatter wins are multiplied by the slot bet, with up to 200x your wager to win. Scatters will reward you wherever they appear, meaning that they don’t have to be on a winning pay line to offer up a pay-out.

The free spins round is also activated by the appearance of the egg scatter; whenever three or more of the dinosaur egg symbols appear in scattered locations on the reels, you’ll see a pick me feature come into play. Simply select each of the eggs to reveal up to 10 free spins per scatter.

If the T-Rex shows up on reel three while free spins is in play, he will proceed to eat all of the other dinosaurs that appear on the reels at the same time. This will then replace them with T-Rex wild symbols prior to any pays being awarded to you. You’re also able to re-trigger the free spins feature round. 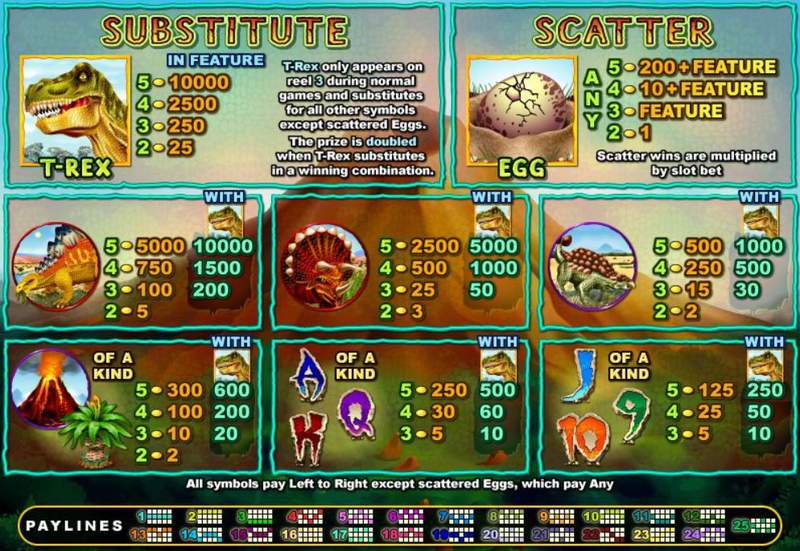 If you’re a fan of dinosaur games, then it’s clear that T-Rex stands out as being one of the best in this genre. With the inclusion of high-quality graphics from RTG, a wild symbol with double multiplier and free spins for you to win, it has everything that we could want from a video slot, and adding a progressive jackpot on top makes it even more appealing.