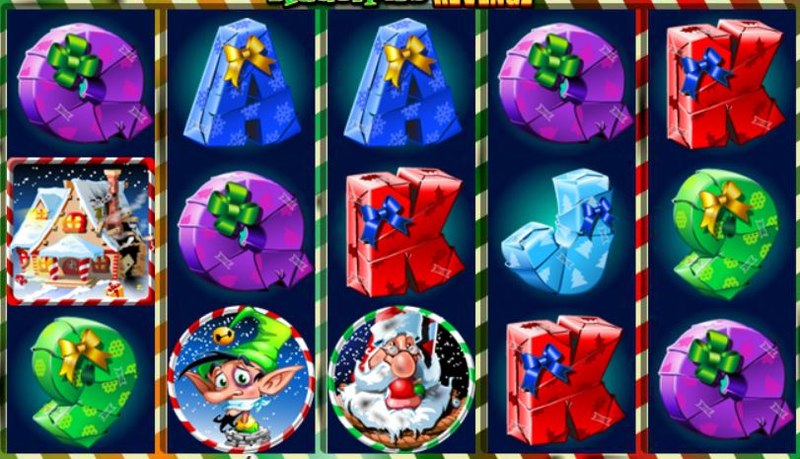 Rudolph has always been at the heart of the Santa Claus Christmas story. If you remember, he’s the reindeer that was picked on by the others for having a red nose only to become the hero on a particularly foggy night. Well, something has definitely changed since then, as in this RTG slot Rudolph has turned into something of a bully – and it’s glorious.

The first of the game’s symbols are gifts in the shape of playing card symbols, however, their wrapping paper has been torn and shredded by Rudolph. Next in line is one of Santa’s elves who has been bound and gagged. Santa’s grotto also appears as a symbol, while another of an elf frozen in an ice block is also present. The highest standard symbol is that of Santa Claus himself, who has been stuffed into the chimney with a bauble in his mouth.

The setup of the game is very standard, with five reels and three rows being on display and a set of 50 pay lines for you to bet on. These lines aren’t able to be customised, though. Additionally, this is one of the few online casino games where the bet cannot be changed, either. Instead, the rate is set at 4p per pay line, meaning that you’ll be placing a bet of £2 per spin every time. 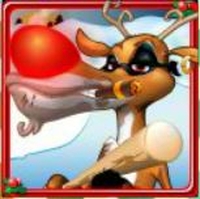 Rudolph himself, who seems to have undergone quite the transformation into his bully-boy status, acts as the game’s wild icon. This means that wherever he shows up he’ll stand in for all other standard symbols within Rudolph’s Revenge. The only exception to this rule is the slot’s scatter addition.

Furthermore, if Rudolph does make up part of a win he will also double the pay-out that you receive for such. This doesn’t apply to any progressive jackpot wins, though.

Progressive Jackpot – It’s also Rudolph who is responsible for activating the slot’s progressive jackpot. The total value of this can be seen at the very top of the reels, and this will continue increasing every time someone makes a bet on the game. The only way that you’re able to win this amount is by lining up five of the Rudolph wilds on a pay line from left to right. 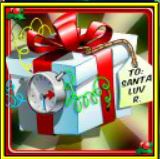 The ticking timebomb that has been wrapped up as a gift represents the slot’s scatter symbol. So, regardless of where the symbol shows up, it will multiply your total bet by a predetermined amount. Five of them coming into view will offer up a multiplier of 20x to your stake. It is this scatter symbol that also activates the game’s free spins round.

Spinning three of them into view will see you rewarded with a total of seven free spins. The prizes during each free spin will be multiplied by 2 plus the number of substituting Rudolph symbols on the screen. During this round, the bomb scatter will transform into an additional wild should four scatters have triggered the feature. If five of them triggered it, then both the bomb and Santa symbols will become extra wilds. You’re also able to re-trigger the round with the appearance of three or more scatters, with seven more spins being granted to you in this instance. 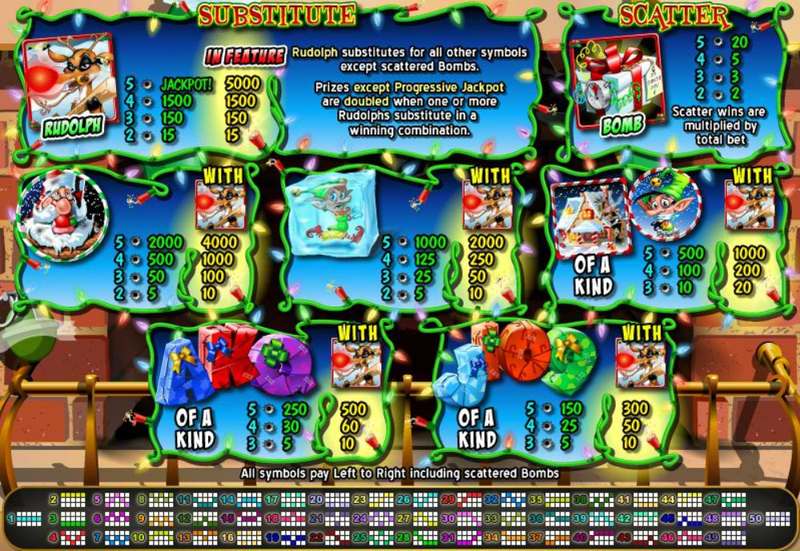 We all like a bit of Christmas cheer – except for the Rudolph in this slot game, it seems. Yet, RTG has made sure that this game remains fun nd slightly tongue in cheek, despite destroying Christmas. Incorporating high-quality graphics and choice special features, this is one slot you won’t want to stop playing. To put it bluntly, Rudolph’s Revenge is exactly what we want from an alternative Christmas slot, and with the inclusion of a progressive jackpot there’s even the chance of a huge payday.