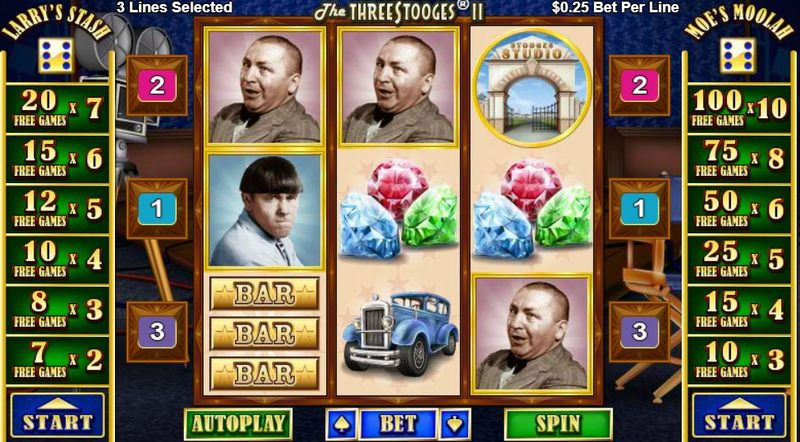 If you don’t know who The Three Stooges are then allow us to enlighten you. Generally speaking, Moe Howard and Larry Fine were the two mainstays of the group, with the third Stooge being portrayed by various people over the years. Essentially, the hallmark of the vaudeville group was physical farce and slapstick, providing comedy entertainment to many. The group remained active from 1922 right the way up to 1970, and featured in 190 short subject films for Columbia Pictures. Even today, these films are regularly aired on television.

It is these three stooges that appear in this RTG slot, with the third one being portrayed by Curly Howard for this game. It features a very classic slot layout consisting of three reels and three rows, but it still maintains a high quality of graphics throughout. The symbols that appear on these reels include some traditional imagery, such as the number 7, cherries, gemstones, the BAR and the lemon. Joining them are symbols of a movie clacker, a vintage car and a shot of the Stooges Studio.

You’ll find that there are three pay lines to be wagered on within the game, which run across the centre of each of the three rows. You cannot reduce the active number of pay lines, but you do have the option of customising the bet that you bring into play. This is done by using the up and down arrows at the bottom of the reels. You’re able to choose from a wager of between £2.10 and £21 per spin.

At the top of the reels you’ll see three different jackpots. There’s the Minor and Major Jackpots which can be won completely at random following any base game spin. There’s also the Three Stooges Jackpot, which you’re able to win only when you spin one of each of the Three Stooges symbols into view on a winning pay line together. 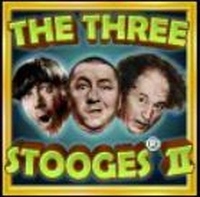 If you see a symbol of The Three Stooges all together then prepare for something exciting to happen. This is the slot’s wild symbol, and this means that it will substitute for any of the other icons within the game. The only exceptions to this rule are the symbols of Larry, Moe and Curly separately.

If the wild does contribute towards a winning combination in the game, then the pay-out will be tripled. Should two of them participate in a win, then you’ll receive a prize multiplier of 9x. 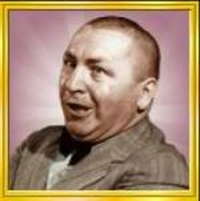 If three symbols of Curly come into view on a winning pay line during base gameplay, then you’ll be rewarded with nine free spins of the reels. During this feature round, all prizes that you win are doubled.

Furthermore, any three mixed Curly, Larry or Moe symbols appearing on a pay line throughout will add a single free spin on top of the current amount remaining. 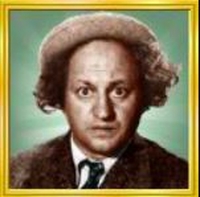 You need to spin three symbols of Larry into view in order to trigger this bonus round. It sees Larry show up with a six-level prize ladder. This shows a variety of rewards, from 7 free spins and a double multiplier up to 20 free spins with a 7x multiplier in operation.

Simply click the start button and watch as a dice is rolled to eliminate different levels on the ladder. After five rolls, the last remaining free spins round is the one that you will play through. 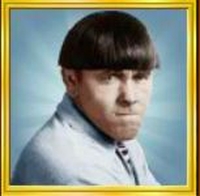 Whenever three symbols of Moe come into view on a winning pay line, the Moe’s Moolah feature begins. As with Larry’s feature, a prize ladder with six levels on it will come into view and you need to roll a dice to eliminate different sections. After five rolls of it, the remaining free spins feature is awarded to you.

This ladder is different though, because Moe’s features up to 100 free spins and a multiplier of up to 10x that can apply itself to your winnings.

If you play one of the feature rounds and your overall free spins win totals five times the triggering bet or less, then the Win-Win feature kicks into action: 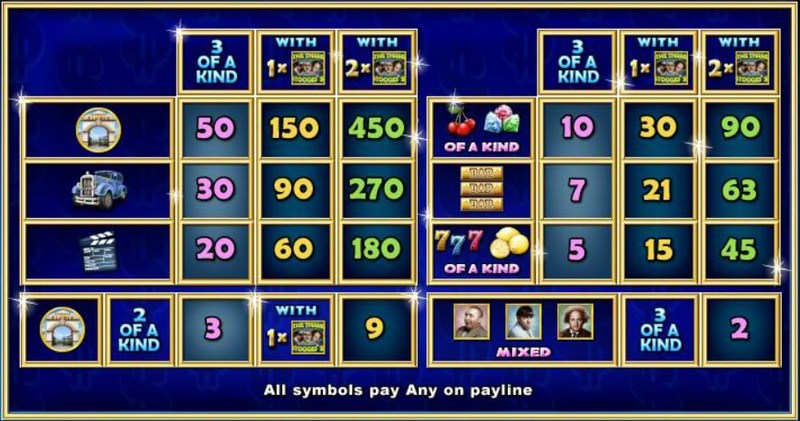 Even if you’re not a fan of The Three Stooges or if you don’t know who they are, this slot game will provide you with an entertaining time. It has some wonderful imagery running through it and the bonus features make it all the more thrilling to spin. A definite classic from the RTG brand.