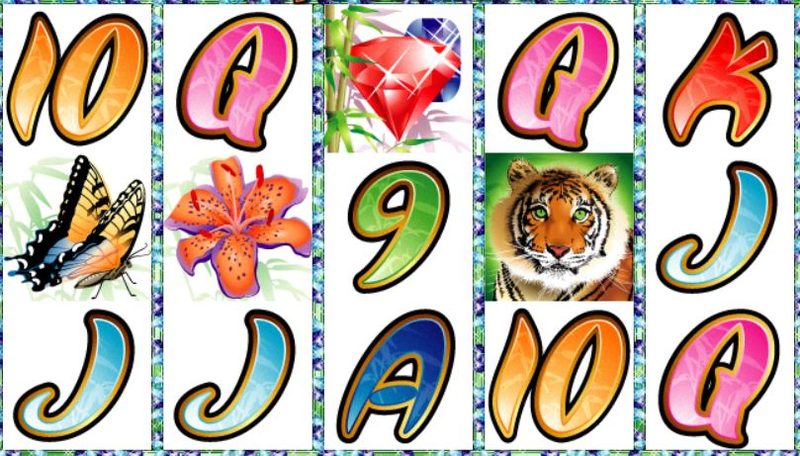 We’re not entirely sure what treasures a tiger is supposed to possess, but if you’re playing this game from RTG it really doesn’t matter; it has plenty of its own inbuilt treasures for you to experience and benefit from. Being one of the developer’s older slot games, Tiger Treasures doesn’t feature the high-quality of graphics that more recent titles have, but when it was released in 2011 the graphics probably stood out as being thoroughly cutting edge.

The game will take you into the jungle, where you’ll be able to witness various animals in their natural habitat. These are present on the reels as the slot’s symbols, although the lower paying symbols are the standard playing card additions, which run from 9 through to A. Then comes a symbol of a peach-coloured flower, which is followed by a colourful butterfly. There’s also a panda on the reels, which is sat conveniently next to sticks of bamboo. Oddly enough, there’s also a symbol that features a red ruby front and centre.

Tiger Treasures features a standard video slot layout of five reels and three rows, and at the same time, RTG has added a selection of 20 pay lines across the reels for you to bet on. If you want to decrease the number of them that are active, you can do so with the up and own buttons next to the “Lines” area. You’re also able to customise the bet that you bring into play simply by using the relevant up and down buttons. Tiger Treasures allows you to select from bets between 1p and £5 per line, therefore, the maximum overall bet stands at £100 per spin.

During base gameplay, you will be able to see the random jackpot on display at the top of the reels. The total value of this will keep increasing when you play, because every time a player places a bet on Tiger Treasures, a small portion of that wager is added to the progressive pot. This jackpot is able to be won completely at random, so just keep spinning the reels and you could receive it as a huge pay-out at any time. 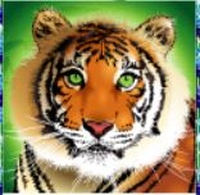 The tiger symbol is the one that will operate as the slot’s substitute/wild symbol, although it will only appear on reels two and four. However, if it will substitute for all other standard symbols with the exception of the scatter.

If this one manages to form part of a winning combination, then it will also proceed to triple the pay-out that you receive for it. So, you can see just how helpful the tiger can be in assisting you with receiving more wins. 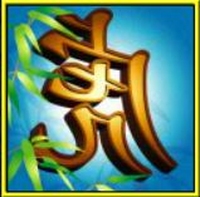 The scatter symbol, much like the random ruby icon, doesn’t appear to have much to do with the game’s theme on the whole; it’s a Chinese symbol. As a scatter symbol it can appear anywhere, and it will still ensure that you receive a pay-out. Five of them showing up across the reels will multiply your wager by 100x as a reward. This one will also activate the Tiger Treasures free spins round.

You’ll need to ensure that at least three of the scatter symbols come into view across the interface to activate free spins, and you’ll then be given anywhere between 5 and 25 free spins. During the round, tiger wild symbols will also appear on the third reel, and extra tigers may also appear on the second and fourth reels to enhance the free spins round. 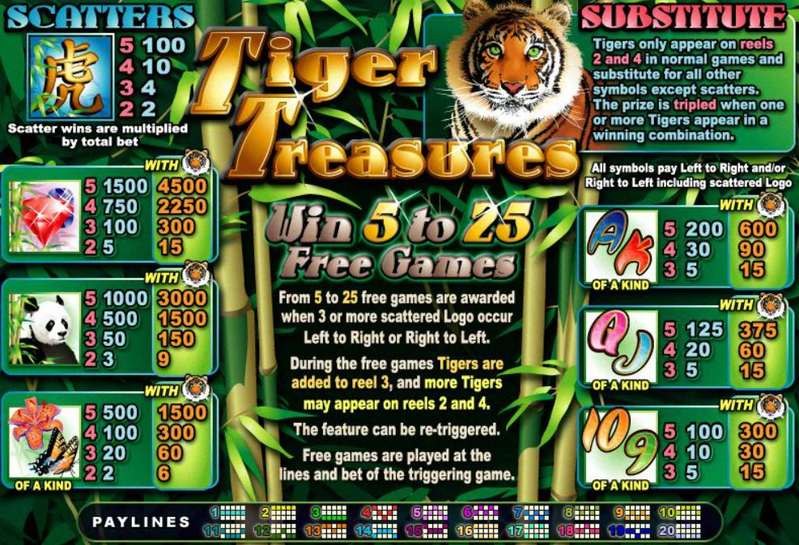 While it’s true that this RTG slot may be an older offering from the developer, it certainly hasn’t lost any of its appeal. That’s because there’s a free spins round available within, a triple multiplying wild and a progressive jackpot alongside the base game. RTG appears to have become a little confused with the overall theme that it was trying to put across, but in the end, does it really matter when it holds so much appeal?