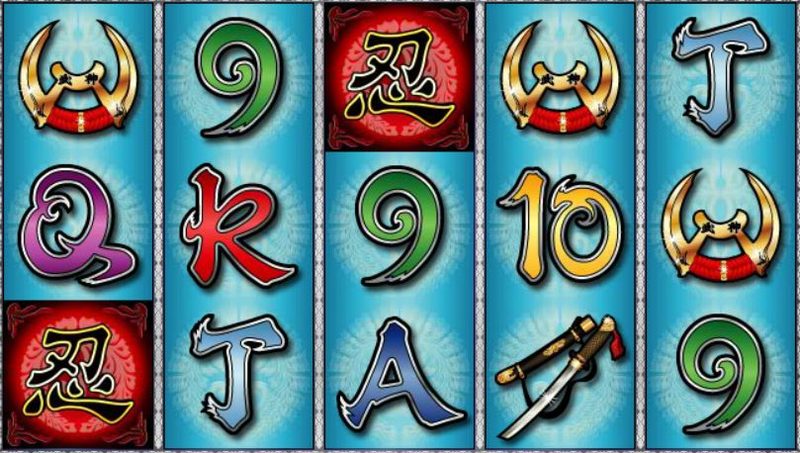 Ninjas will always be fascinating; they are ferocious figures, their skills are unparalleled, and they are masters of stealth. Ninja Star from RTG aims to showcase those skills with the theme focusing on the weapons and traits acquired by ninjas. The background takes you to a location somewhere in the East of Asia, while upon the reels, you’ll see some pretty intriguing graphics.

The first of the game’s symbols are the playing card symbols running from 9 through to Ace. Then comes a symbol of a hidden blade and another of a curved weapon. There’s also a symbol of an ancient temple, while the highest paying standard symbol comes in the form of the logo created from Chinese characters. Granted, this is one of the older games from RTG so the graphics aren’t as high-quality as would be expected these days, however, the game was seriously impressive when it came out in 2013.

You’ll see five reels and three rows altogether, so everything should look fairly familiar to regular slot players. The game also features a set of 25 pay lines to place wagers on, yet if you want to reduce the number of active lines just use the up and down buttons at the bottom of the reels. You can change the stake with the second set of these buttons, allowing bets of between 1p and 10p per active pay line, with a maximum overall wager of £2.50 per spin.

Two progressive jackpots are also available within the Ninja Star game. These can be seen at the top of the reels, and the total value of such will increase whenever someone places a bet on the game. You’re able to win one of them completely at random, so keep spinning the reels and you may find yourself on the receiving end of a huge win. 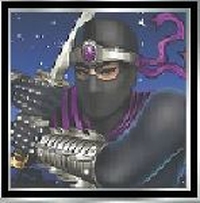 There has to be a ninja appearing on the reels of a slot called Ninja Star, and here it acts as the wild. Ninja wilds will show up on reels one, three and five, and if they do, they will substitute for all other symbols appearing in the game.

The only one that it won’t do this for is the scatter icon, but it’s clear that the wild can be of great assistance to you. 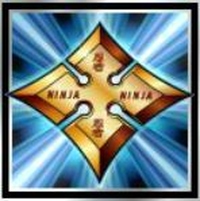 It’s the ninja star that operates as this game’s scatter symbol. As such, it is able to show up in any position on the reels and still grant you a pay-out. If five of them appear anywhere, then you will see your in-play bet multiplied by 250x. It is also this one that triggers the slot’s free spins feature.

If you manage to spin three or more of the scattered ninja stars into view across the reels then you will activate eight free spins. All prizes in play during this round are tripled for you, although the feature is not something that you’re able to re-trigger. Additionally, all logo symbol appearing during this round will be altered into wild or scatter symbols to give you greater benefits. 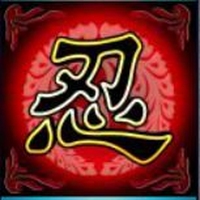 Should you spin three or more logo symbols into view during base gameplay, then you will activate the Ninja Scroll Feature. This reveals four sets of two scrolls, and the ninja will open one of the upper rows of scrolls to reveal a prize. You’ll then see “Pick Again”, “Next Level” or “Feature Over” from the scroll.

There are three levels to go through and the higher levels may reward you with higher prizes. The feature ends whenever “Feature Over” is revealed behind a scroll. 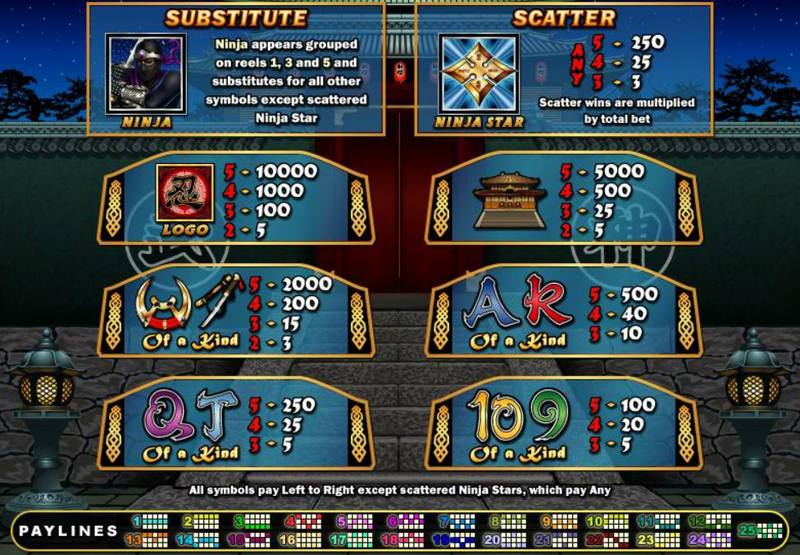 On the whole, Ninja Star is a very entertaining slot game from RTG. It has all the relevant imagery within to convey the theme and the special features make it even more appealing. When you also consider that there’s a chance to win a progressive jackpot while playing it, everything becomes even more exciting.