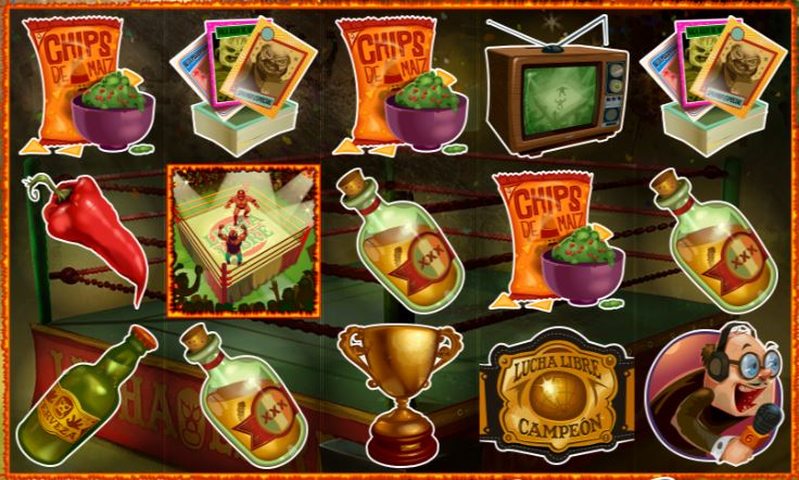 How do you fancy taking a trip to Mexico and watching the lucha libre wrestlers take to the skies? Well, RTG have just saved you the cost of a flight by bringing the Lucha Libre slot game to your screen instead. This one will bring forth all of the excitement that lucha libre wrestling is famous for, so choose your favourite fighter and will him on to victory with headscissor takedowns, diving hurricanranas, frankensteiners and much more.

Appearing on the reels of the Lucha Libre slot, you’ll get to see a bottle of tequila and a hot chilli pepper as symbols. Then comes the guacamole and chips, as well as a symbol featuring cards of the competitors. A television comes next, as does a bottle of unknown liquid. A poster advertising the wrestling event can also be seen as a symbol, while a golden trophy for the winner comes next. There’s also a gold championship belt and a symbol of a commentator.

Accessing this slot will present you with a layout that consists of five reels and three rows in total. Alongside this standard video slot interface, the developer has taken the opportunity to incorporate 25 separate pay lines for betting on. The number of active lines per spin can be adjusted by using the relevant buttons at the bottom of the reels. Meanwhile, your bet itself is also changeable by utilising the arrows on either side of the ‘Bet’ box. This allows you to choose from wagers between 25p and £2.50 per spin. There’s also the inclusion of an auto play function. 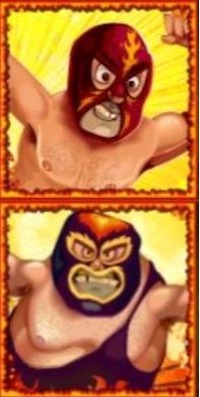 Lucha Libre isn’t one to hold back when it comes to special features, it seems. After all, it does possess two different wild symbols which come in the shape of the two competitors. There’s Taco Malo and Guacamole – both of whom look ready to tear one another limb from limb.

The wrestlers appear as grouped wilds on the third reel only and they will substitute for all other standard symbols. The only exception to this rule is the slot’s scatter icon. When a wrestler wild covers the third reel, it also has the potential to double the pay-out that you receive for such. Alternatively, the full wild reel can move across onto at least one more of the four remaining reels.

As with the wild symbols, there are two scatter symbols in Lucha Libre. Scatter wins are paid out by multiplying the wager you have placed by a predetermined amount, and scatters don’t need to appear on winning pay lines for you to receive a reward. 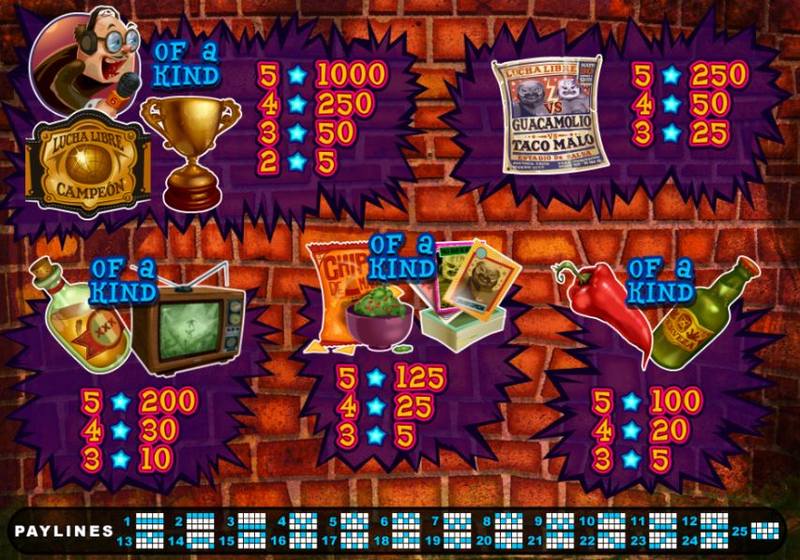 Lucha Libre is definitely a slot that can captivate you from the very first moment. It’s got high-quality graphics during play but the theme is ultimately what draws you in to begin with. Not only that, but RTG has included a couple of unique special features for you to play through that tie into the theme brilliantly, as well as double the number of wilds and scatters that would be found in a standard video slot. All in all, Lucha Libre ticks all the boxes.