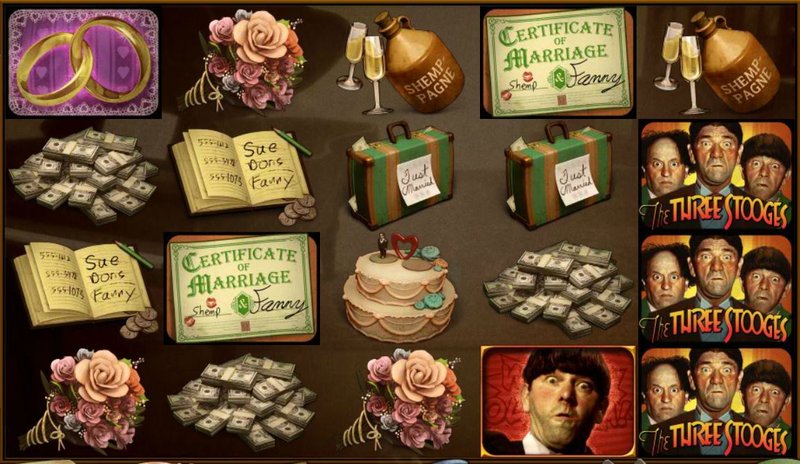 Brideless Groom is one of the most popular and best-known of The Three Stooges’ comedy shorts, the 101st to be released by Columbia Pictures in September of 1947. The Stooges were at this point portrayed by Moe Howard, Larry Fine, and Shemp Howard. Shemp portrays a voice instructor who has an admirer in deaf vocal student Miss Dinkelmeyer. Larry is his musical accompanist and Moe enters the lesson to inform Shemp that he has inherited $500,000 from a passing uncle, but he can only claim it if he is married. This leads to much slapstick hilarity as he seeks a wife.

Upon the reels of this RTG game you’ll see stock imagery and clips of the stooges themselves, as well as symbols of Shemp’s black book of women, a bouquet of flowers, as well as two champagne glasses next to a jug of “Shemp-Pagne”. There’s also a suitcase with “Just Married” written on it, a wedding cake, stacks of money, and a marriage certificate. Each of the three stooges appear as symbols too.

The slot features a standard set of five reels for you to spin, but there are also four rows in operation. This makes it slightly larger than what is considered the norm for video slots, but it suits a Stooges slot to be a bit odd. RTG has also added a set of 33 customisable pay lines across the interface, and you’re also able to adjust the bet that you bring into play between 33p and £3.30 per spin.

At the end of any base game spin, a Lucky Stooge Feature may begin at random. Either 9 or 33 free spins will be given to you, with all prizes that incorporate a wild symbol being tripled for you throughout. Stooge Re-Spins and Stooge Picks may also be triggered during the Lucky Stooge Spins feature. 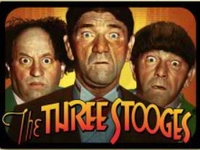 The symbol that displays The Three Stooges together operates as this game’s wild addition. This one will appear as a grouped wild on all reels, and when it shows up it will substitute for all the other symbols in the game. The only exception exists in the form of the scatter symbol.

If you manage to spin five of the wild symbol into view on a winning pay line, your wager will be multiplied 3,333x over.

The interlinked pair of wedding rings act as the slot’s scatter symbol. Wherever this one appears on the reels, it will still reward you with a pay-out.

Five of them coming into view across the lay-out will multiply your stake by 333x.

You’ll see a re-spins feature come into play when the symbols of each of the stooges cover at least one middle reel during normal gameplay or Lucky Stooge Spins.

Stooge Picks – Should you manage to go on and cover all three of the central reels with stooges, then the Stooge Picks round will start. You’re shown a screen with the stooges on televisions, and you need to pick from them until you find two parts of a broken heart. Picks from these televisions can add free spins, Whacky Wilds or act as an increase to the prize multiplier. Whacky Wilds will turn Shemp, Larry or Moe wild when they appear on all positions on the central reels, respectively. Free spins starts after the pick round has ended. 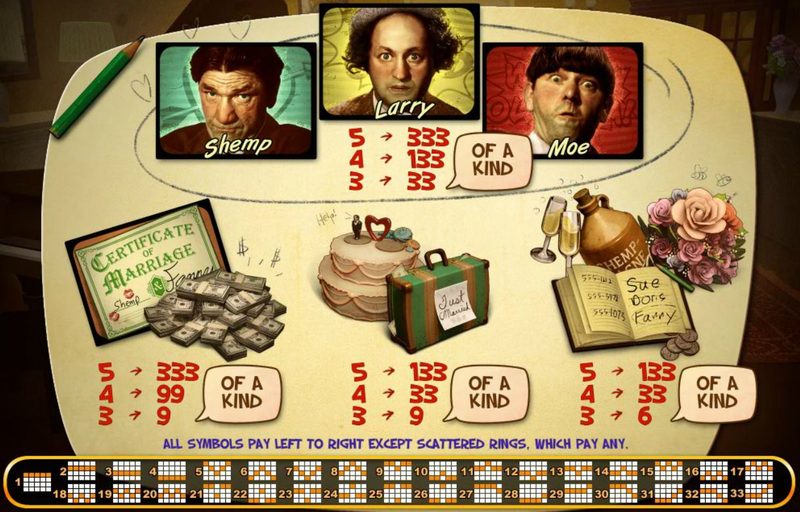 Anyone accessing this online slot will find it to be exceptionally entertaining. Not only does RTG fill it with impressive graphics and animations, but there’s a great set of inbuilt special features for you to activate, too. The Three Stooges: Brideless Groom brings forth all the fun of the short film and places it into a modern-day video slot with skill and class.