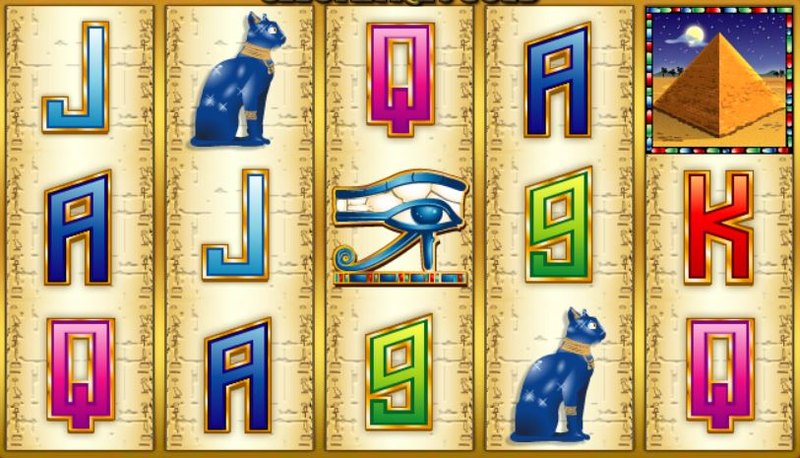 Other than Tutankhamen, Cleopatra is perhaps the best known of the ancient Egyptian rulers. Known for being strikingly beautiful and living a life of luxury, it is said that she became embroiled in a relationship with Rome’s Julius Caesar as well as a separate one with Mark Antony later. Granted, RTG isn’t the first online software developer to create a slot game surrounding the Egyptian ruler, but it does bring an alternate quality to Cleopatra’s Gold.

This slot is one of the developer’s earlier games, which does mean that the graphics within aren’t quite as good as some of the other games in its catalogue. However, you’ll still get to enjoy a visually appealing game with playing card icons appearing as its lower-paying symbols. These are followed by symbols of an ankh, a black cat, the Eye of Horu and the scarab beetle.

The interface of this slot game is made up of five reels and three rows in total. At the same time, it features a selection of 20 paylines for you to bet on, which can also be customised. So, if you have a preference for betting on fewer lines, you can do by using the relevant up and down arrows found at the bottom of the reels. Additionally, players have the chance to customise their bet per spin. The minimum overall bet stands at 20p per spin, while the maximum is £100 per spin.

At the top of the slot’s reels, you’ll see a random jackpot amount. This can be seen increasing as you continue playing, with a small contribution coming from every player every time they place a bet. This progressive jackpot amount can be won at the conclusion of any spin, meaning that you don’t need to be placing any specific bet in order to win it, it’s completely random. Progressive jackpot wins will be added on to any other win formed during the game. 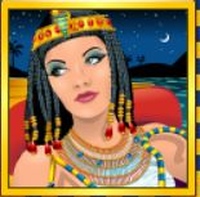 A game such as this would be fairly dull without one or two special features, and fortunately, RTG knows this. That’s why it has first of all incorporated a wild symbol into proceedings. Cleopatra herself is the symbol that operates as the wild, substituting for all other symbols on the reels. The only exception to this rule is the slot’s scatter symbol.

If she manages to assist you with forming a winning combination then she’ll also double the pay-out that you receive. Make up a win from five of the Cleopatra wild symbols and your wager will be multiplied by 10,000x. 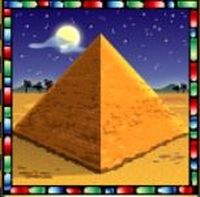 It’s the symbol of the pyramid that works as the game’s scatter addition. This means that it is able to show up anywhere, and as long as two or more are present you’ll still get a pay-out. Five of them appearing across the interface will multiply your stake by 500x.

The pyramid can also provide you with a set of free spins while playing Cleopatra’s Gold.

It takes three or more of the game’s scatter symbol to come into view before you get the chance to enjoy some free spins. There are a total of 15 free spins on offer to you, and during this feature round, all winning combinations receive a triple multiplier.

Should you manage to spin three or more further scatters into play during this round, then you will receive an additional 15 free spins as on top. 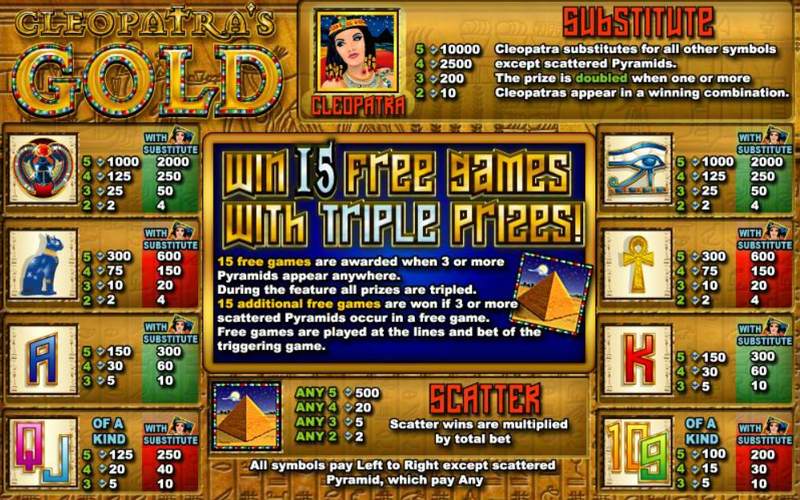 Cleopatra’s Gold may not be the most high-quality game from RTG where graphics are concerned, but entertaining it is, nonetheless. The theme is executed with skill, while the slot’s inbuilt special features of the wild, free spins and progressive jackpot total all combine together to ensure that you’re having a thoroughly entertaining time throughout. Overall, it makes for a nice addition to the selection of slot games created and provided by RTG.