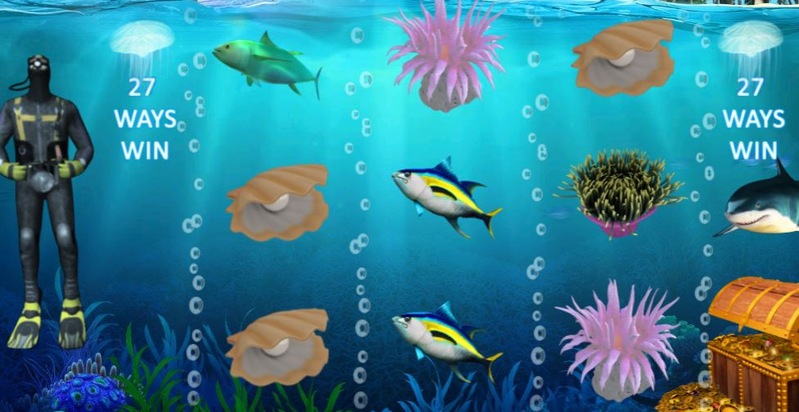 Scuba Fishing from RTG will take you diving down under the water – then again, where else would you expect a scuba fishing trip to take place? Fortunately, this game utilises wonderful graphics, so whenever you play it you will get the best view of the underwater world. In fact, to the very left of the reels you’ll see a scuba diver waiting to take photos of his favourite marine life. Meanwhile, on the right-hand side, there’s a treasure chest waiting to be discovered.

All of the symbols appearing upon the game’s reels are sea life creatures, starting with anemones, shells, and piece of coral. There’s also the addition of a pufferfish, while standard green and red fish also appear as symbols in Scuba Fishing. A swordfish makes up the slot’s highest paying standard symbol, while a tuna fish also shows up. All symbols will pay from left to right whenever three-of-a-kind come into view on a pay line.

Speaking of the reels, there are three of these for you to spin. They are joined by three rows, and the reels are separated by air bubbles floating up to the surface. RTG has chosen to add a set of 27 ways for you to win, which is not something that you have the possibility of altering. You can adjust the value of the bet that you bring into play per spin, though. This is done with the plus and minus buttons on hand, allowing you to bet between 20p and £100 per spin. 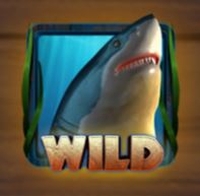 You’d better be on the lookout for the appearance of the deadly shark. This one provides the game with its wild symbol. As such, it can appear anywhere on the reels and substitutes for any of the standard symbols already mentioned – quite helpful when it comes to forming winning combinations.

You’ll also be able to trigger the slot’s re-spin feature whenever three wild symbols stack up on the central reel.

Re-spin Feature – If three wilds show up on the middle reel, they will combine together to become an expanded wild. This will then activate the slot’s re-spin function. The expanded wild remains in place on the third reel while reels one and three go through a single re-spin. The reels feature blank symbols and one randomly selected symbol to provide you with better opportunities of winning. This can prove to be highly effective in helping you to secure wins once it comes into play. 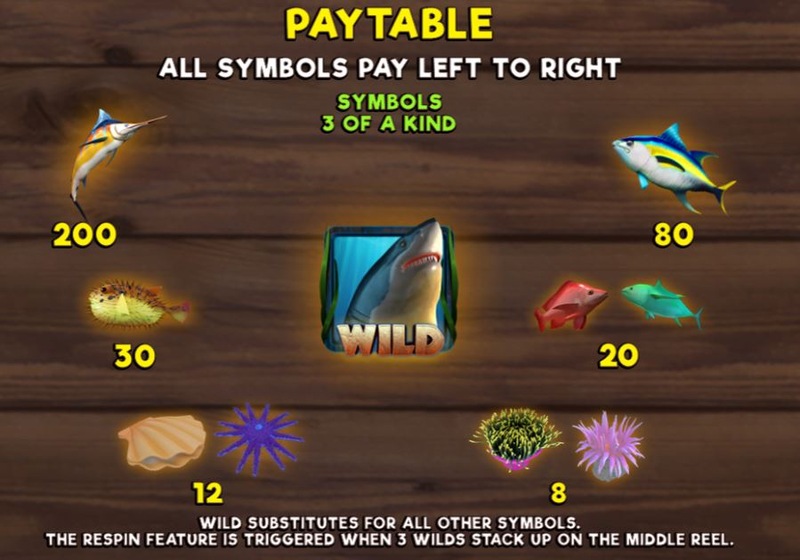 While it’s true that there isn’t so much action taking place in the Scuba Fishing game, the features that it does have are executed very well by RTG. The graphics are certainly second-to-none and the overall gameplay stands out for all the right reasons. It’s always great to see a wild symbol, especially if it can expand like this one and then trigger a re-spin that pretty much guarantees you a win.